USE COFFEE AS FUEL IN BRAZIL LOCOMOTIVES (Dec, 1932) 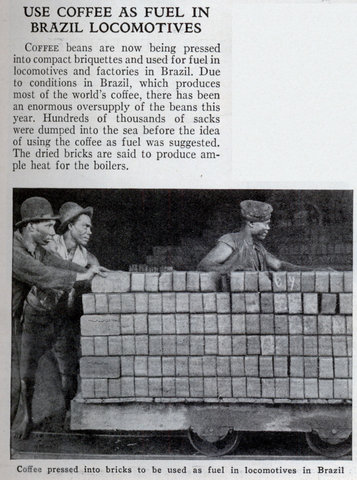 USE COFFEE AS FUEL IN BRAZIL LOCOMOTIVES

Coffee beans are now being pressed into compact briquettes and used for fuel in locomotives and factories in Brazil. Due to conditions in Brazil, which produces most of the world’s coffee, there has been an enormous oversupply of the beans this year. Hundreds of thousands of sacks were dumped into the sea before the idea of using the coffee as fuel was suggested. The dried bricks are said to produce ample heat for the boilers.