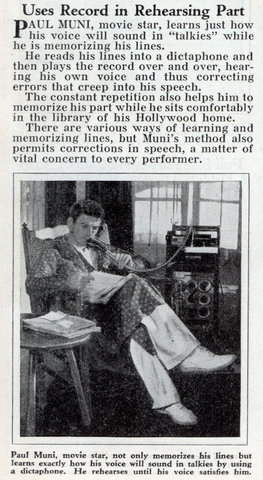 PAUL MUNI, movie star, learns just how his voice will sound in “talkies” while he is memorizing his lines.

He reads his lines into a dictaphone and then plays the record over and over, hearing his own voice and thus correcting errors that creep into his speech.

The constant repetition also helps him to memorize his part while he sits comfortably in the library of his Hollywood home.

There are various ways of learning and memorizing lines, but Muni’s method also permits corrections in speech, a matter of vital concern to every performer.