Popular Science
Issue: Apr, 1971
Posted in: Ahead of its time, Computers, Origins
5 Comments on V.R. Goggles: 3-D trip inside a drawing, via computer graphics (Apr, 1971) 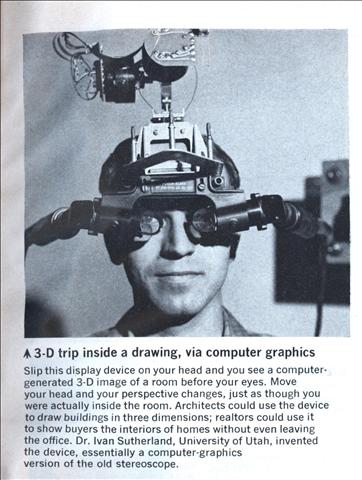 3-D trip inside a drawing, via computer graphics

Slip this display device on your head and you see a computer-generated 3-D image of a room before your eyes. Move your head and your perspective changes, just as though you were actually inside the room. Architects could use the device to draw buildings in three dimensions; realtors could use it to show buyers the interiors of homes without even leaving the office. Dr. Ivan Sutherland, University of Utah, invented the device, essentially a computer-graphics version of the old stereoscope.