Wow, the model with a speaker only weighs 21 lbs! That’s practically nothing! I love the picture of the girls rocking out on the beach. 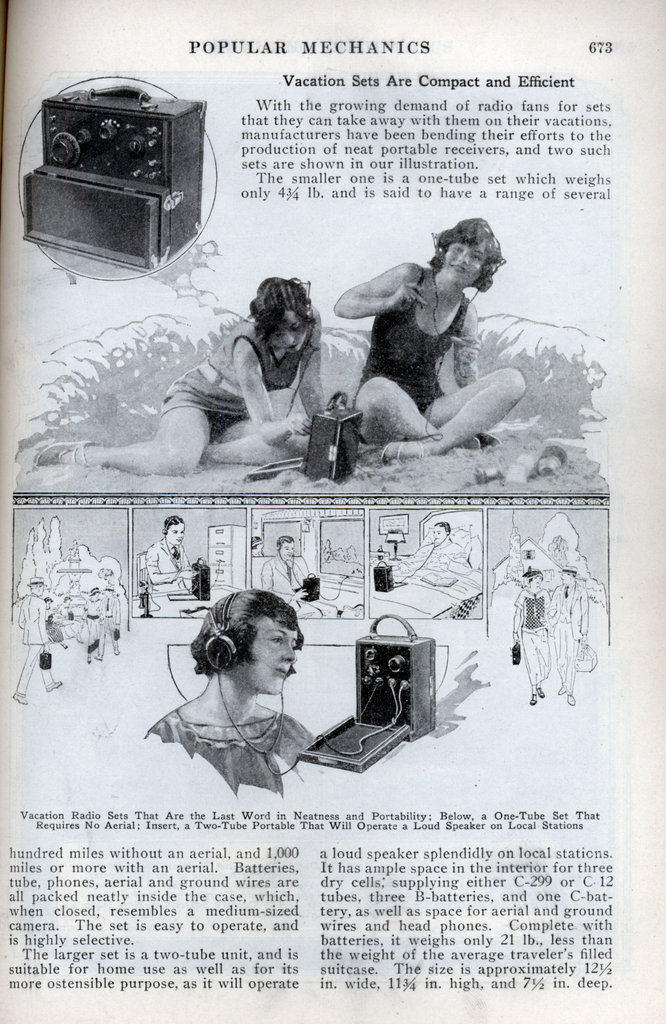 Vacation Sets Are Compact and Efficient

With the growing demand of radio fans for sets that they can take away with them on their vacations, manufacturers have been bending their efforts to the production of neat portable receivers, and two such sets are shown in our illustration.

The smaller one is a one-tube set which weighs only 4-3/4 lb. and is said to have a range of several hundred miles without an aerial, and 1,000 miles or more with an aerial. Batteries, tube, phones, aerial and ground wires are all packed neatly inside the case, which, when closed, resembles a medium-sized camera. The set is easy to operate, and is highly selective.

The larger set is a two-tube unit, and is suitable for home use as well as for its more ostensible purpose, as it will operate a loud speaker splendidly on local stations. It has ample space in the interior for three dry cells; supplying either C-299 or C-12 tubes, three B-batteries, and one C-battery, as well as space for aerial and ground wires and head phones. Complete with batteries, it weighs only 21 lb, less than the weight of the average traveler’s filled suitcase. The size is approximately 12-1/2 in. wide, 11-3/4 in. high, and 7-1/2 in. deep.