Popular Mechanics
Issue: May, 1936
Posted in: Automotive
13 Comments on ‘Vacuum-Rocket’ Car Sets Style for Dirigible (May, 1936) 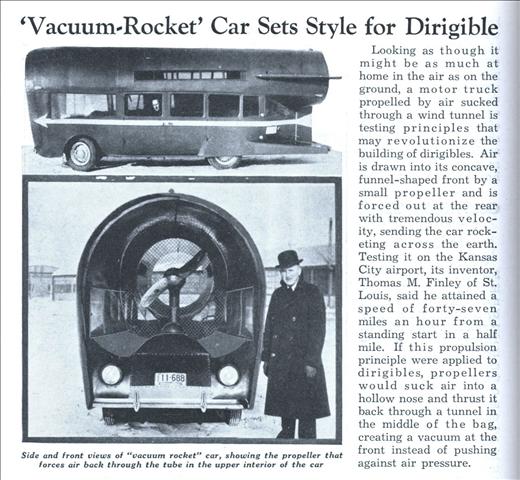 ‘Vacuum-Rocket’ Car Sets Style for Dirigible
Looking as though it might be as much at home in the air as on the ground, a motor truck propelled by air sucked through a wind tunnel is testing principles that may revolutionize the building of dirigibles. Air is drawn into its concave, funnel-shaped front by a small propeller and is forced out at the rear with tremendous velocity, sending the car rocketing across the earth. Testing it on the Kansas City airport, its inventor, Thomas M. Finley of St. Louis, said he attained a speed of forty-seven miles an hour from a standing start in a half mile. If this propulsion principle were applied to dirigibles, propellers would suck air into a hollow nose and thrust it back through a tunnel in the middle of the bag, creating a vacuum at the front instead of pushing against air pressure.