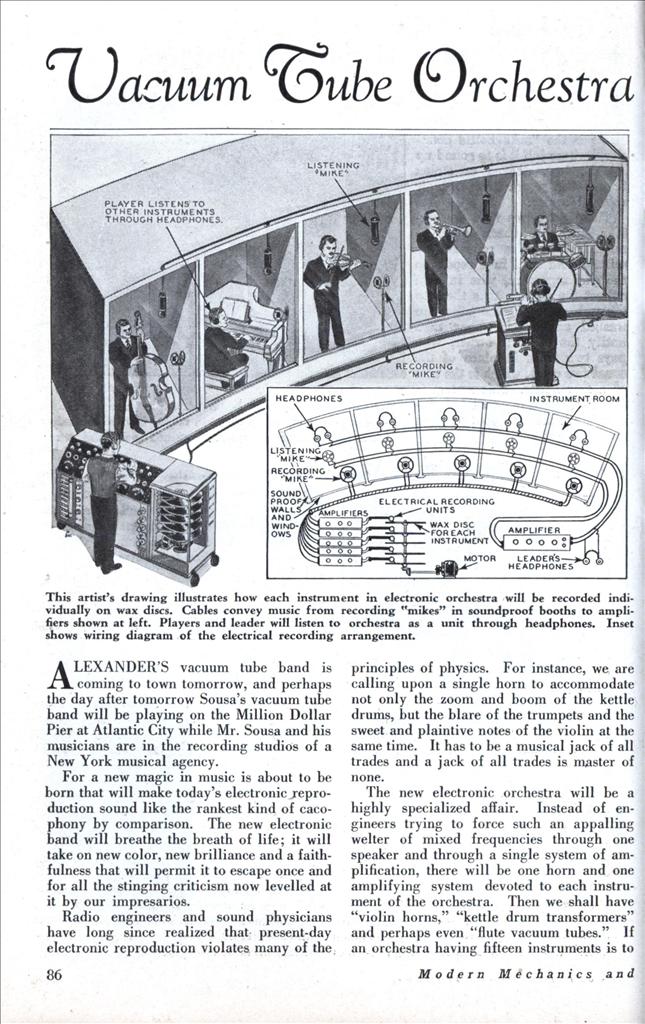 ALEXANDER’S vacuum tube band is coming to town tomorrow, and perhaps the day after tomorrow Sousa’s vacuum tube band will be playing on the Million Dollar Pier at Atlantic City while Mr. Sousa and his musicians are in the recording studios of a New York musical agency.

For a new magic in music is about to be born that will make today’s electronic reproduction sound like the rankest kind of cacophony by comparison. The new electronic band will breathe the breath of life; it will take on new color, new brilliance and a faithfulness that will permit it to escape once and for all the stinging criticism now levelled at it by our impresarios.

Radio engineers and sound physicians have long since realized that present-day electronic reproduction violates many of the principles of physics. For instance, we are calling upon a single horn to accommodate not only the zoom and boom of the kettle drums, but the blare of the trumpets and the sweet and plaintive notes of the violin at the same time. It has to be a musical jack of all trades and a jack of all trades is master of none.

The new electronic orchestra will be a highly specialized affair. Instead of engineers trying to force such an appalling welter of mixed frequencies through one speaker and through a single system of amplification, there will be one horn and one amplifying system devoted to each instrument of the orchestra. Then we shall have “violin horns,” “kettle drum transformers” and perhaps even “flute vacuum tubes.” If an orchestra having fifteen instruments is to be reproduced, there will be fifteen horns and fifteen separate vacuum tube amplifiers working in perfect unison and harmony.

Recording will be accomplished in very much the same way. The problem of recording is solved by so arranging the musicians in separate soundproof rooms that they may be permitted to play as a unit and yet be recorded independently. A glance at the accompanying sketch will clearly show how this is brought about. Each room has its own microphone and headphones. All of the microphones feed into a master circuit and each musician plugs his headphones into this circuit. This permits the player to hear the orchestra as a unit.

Then there is a second microphone which is used for recording purposes. This second microphone is connected to an independent circuit and recording device which is best suited for the particular instrument it is called upon to record. The leader is also provided with a pair of earphones so that he, too, may listen to the orchestra playing as a unit.

If the orchestra hag five pieces, five records will be made either on film to be reproduced photo-electrically or on wax to be reproduced by an ordinary electric system such as that now used on electric phonographs. In either case synchronization will be possible with very little trouble. If wax is used, a reproducing system similar to that shown in the illustration will be employed. Here the disc will simply be mounted on one shaft. Tiny dots will mark the starting point on each record and the reproducers will be set on this mark. The resulting synchronization of the instruments will be perfect.