I can’t imagine why these didn’t take off. That monorail train looks utterly stable to me! Not to mention the plane stabilized by a pendulum. 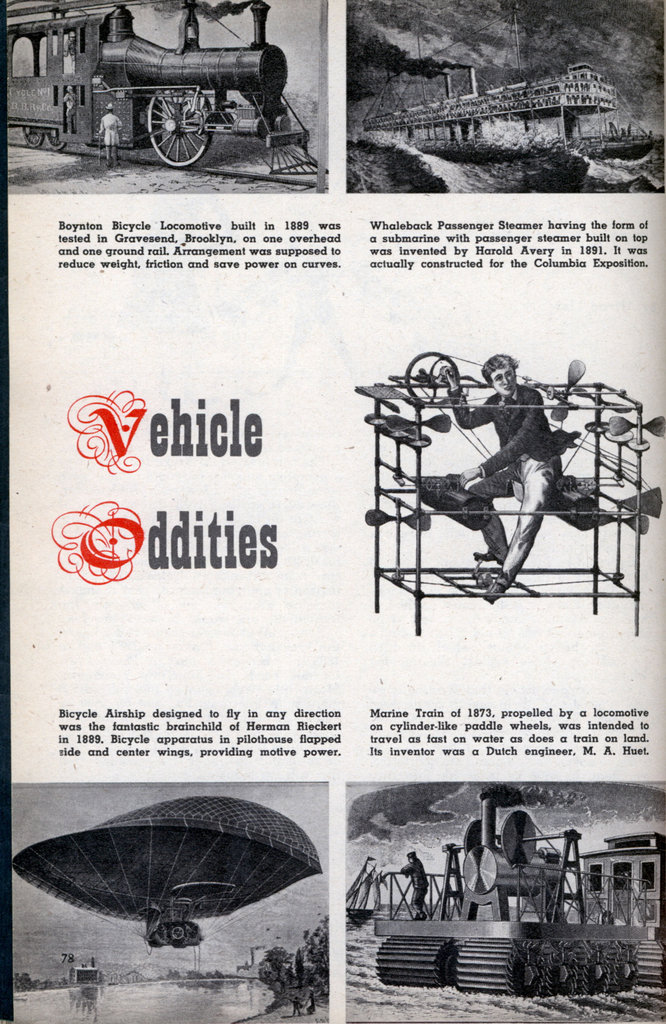 Boynton Bicycle Locomotive built in 1889 was tested in Gravesend, Brooklyn, on one overhead and one ground rail. Arrangement was supposed to reduce weight, friction and save power on curves.

Bicycle Airship designed to fly in any direction was the fantastic brainchild of Herman Rieckert in 1889. Bicycle apparatus in pilothouse flapped side and center wings, providing motive power.

Whaleback Passenger Steamer having the form of a submarine with passenger steamer built on top was invented by Harold Avery in 1891. It was actually constructed for the Columbia Exposition.

Marine Train of 1873, propelled by a locomotive on cylinder-like paddle wheels, was intended to travel as fast on water as does a train on land. Its inventor was a Dutch engineer, M. A. Huet.

Aerial Machine invented by W. O. Ayres in 1885 got its power from air compressed to 3.000 lbs. per sq. in. in two drums. Air was supposed to feed through tubes to motors, last for several hours.

Aerial Railway for towing craft on land and water got its power from wind on wings held up by balloons. Passenger basket was tied midway on towing cables. Invented in 1890 by David Thayer.

Pennington Aluminum Airship of 1891 had large sail over its gas bag which could be manipulated like that of a boat. It had propeller in front for motion, two propellers in each side wing.

Chase-Kirchner Aerodynamic Railroad of 1894 was a combination of an electric high-speed railroad and aeroplane. Inventors claimed it could attain 150 mph on a straight track, never tested it.

Spheroid Dirigible of 1887 had central compartment for passengers with buoyancy chamber at top and bottom. Engine was placed in hollow shaft in center connected to pilothouse below.