I’ve always loved that the Heaviside Layer sounds like the name describes its properties, but was actually just discovered by a guy named Heaviside. Obviously it confused the writer or editor of this piece because they spelled it “Heavyside”. I wonder if there is a term for eponyms that sound like they are descriptive words. 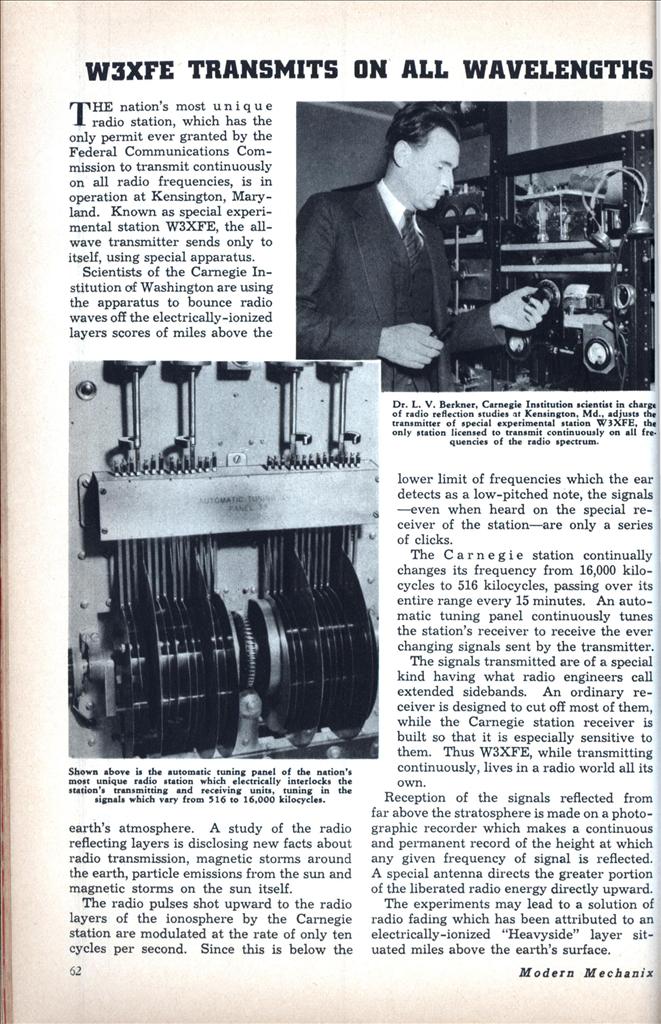 W3XFE TRANSMITS ON ALL WAVELENGTHS

THE nation’s most unique radio station, which has the only permit ever granted by the Federal Communications Commission to transmit continuously on all radio frequencies, is in operation at Kensington, Maryland. Known as special experimental station W3XFE, the all-wave transmitter sends only to itself, using special apparatus.

Scientists of the Carnegie Institution of Washington are using the apparatus to bounce radio waves off the electrically-ionized layers scores of miles above the earth’s atmosphere. A study of the radio reflecting layers is disclosing new facts about radio transmission, magnetic storms around the earth, particle emissions from the sun and magnetic storms on the sun itself.

The radio pulses shot upward to the radio layers of the ionosphere by the Carnegie station are modulated at the rate of only ten cycles per second. Since this is below the lower limit of frequencies which the ear detects as a low-pitched note, the signals —even when heard on the special receiver of the station—are only a series of clicks.

The Carnegie station continually changes its frequency from 16,000 kilocycles to 516 kilocycles, passing over its entire range every 15 minutes. An automatic tuning panel continuously tunes the station’s receiver to receive the ever changing signals sent by the transmitter.

The signals transmitted are of a special kind having what radio engineers call extended sidebands. An ordinary receiver is designed to cut off most of them, while the Carnegie station receiver is built so that it is especially sensitive to them. Thus W3XFE, while transmitting continuously, lives in a radio world all its own.

Reception of the signals reflected from far above the stratosphere is made on a photographic recorder which makes a continuous and permanent record of the height at which any given frequency of signal is reflected. A special antenna directs the greater portion of the liberated radio energy directly upward.

The experiments may lead to a solution of radio fading which has been attributed to an electrically-ionized “Heavyside” layer situated miles above the earth’s surface.