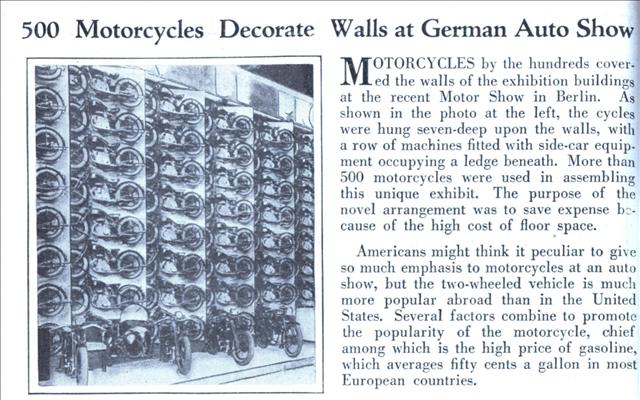 MOTORCYCLES by the hundreds covered the walls of the exhibition buildings at the recent Motor Show in Berlin. As shown in the photo at the left, the cycles were hung seven-deep upon the walls, with a row of machines fitted with side-car equipment occupying a ledge beneath. More than 500 motorcycles were used in assembling this unique exhibit. The purpose of the novel arrangement was to save expense because of the high cost of floor space.

Americans might think it peculiar to give so much emphasis to motorcycles at an auto show, but the two-wheeled vehicle is much more popular abroad than in the United States. Several factors combine to promote the popularity of the motorcycle, chief among which is the high price of gasoline, which averages fifty cents a gallon in most European countries.