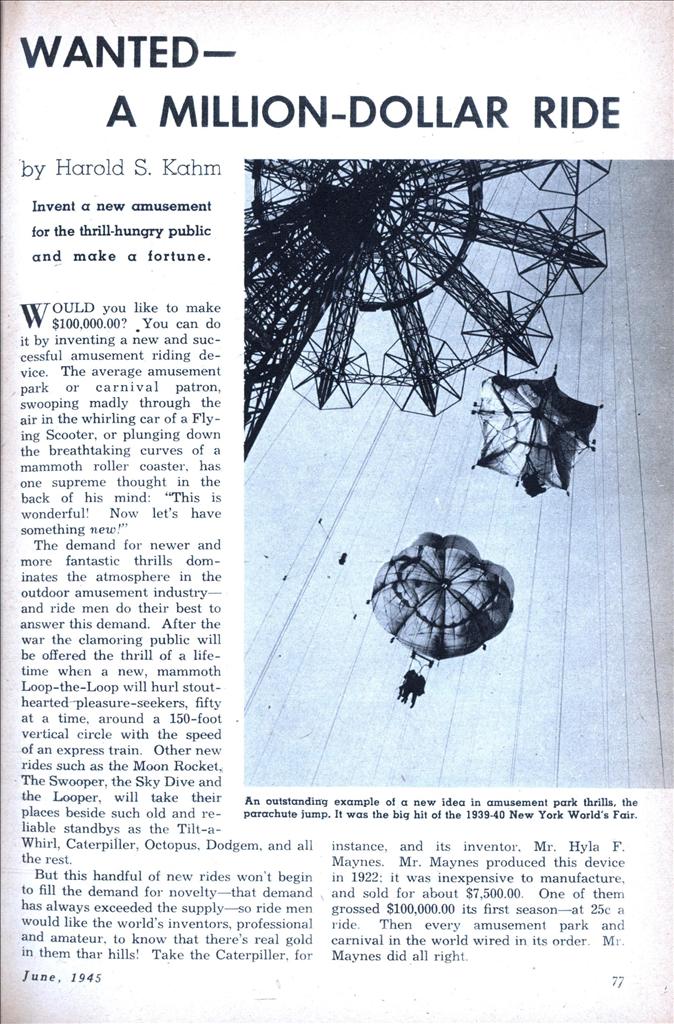 Invent a new amusement for the thrill-hungry public and make a fortune.

WOULD you like to make $100,000.00? .You can do it by inventing a new and successful amusement riding device. The average amusement park or carnival patron, swooping madly through the air in the whirling car of a Flying Scooter, or plunging down the breathtaking curves of a mammoth roller coaster, has one supreme thought in the back of his mind: “This is wonderful! Now let’s have something new!”

The demand for newer and more fantastic thrills dominates the atmosphere in the outdoor amusement industry— and ride men do their best to answer this demand. After the war the clamoring public will be offered the thrill of a lifetime when a new, mammoth Loop-the-Loop will hurl stouthearted pleasure-seekers, fifty at a time, around a 150-foot vertical circle with the speed of an express train. Other new rides such as the Moon Rocket,; The Swooper, the Sky Dive and the Looper, will take their places beside such old and reliable standbys as the Tilt-a-Whirl, Caterpiller, Octopus, Dodgem, and all the rest.

But this handful of new rides won’t begin to fill the demand for novelty—that demand has always exceeded the supply—so ride men would like the world’s inventors, professional and amateur, to know that there’s real gold in them thar hills! Take the Caterpiller, for instance, and its inventor, Mr. Hyla F. Maynes. Mr. Maynes produced this device in 1922; it was inexpensive to manufacture, and sold for about $7,500.00. One of them grossed $100,000.00 its first season—at 25c a ride. Then every amusement park and carnival in the world wired in its order Mi Maynes did all right.

The Caterpiller wasn’t a complicated device, actually; it was just a clever idea transmitted into durable materials. It consisted of a series of cars going around on a circular, undulating track—practically no thrill at all, for the motion was very mild. But what a wallop it carried for romance-minded young couples! Every few seconds the revolving cars would be enveloped by a canvas cover that would close down over the riders, plunging them into total darkness—ideal occasion for a stolen kiss. And to top it all, many of the rides were fitted with powerful blowers underneath the cars that sent up gusts of wind which would cause feminine riders to scream as they frantically clutched their skirts. A bit rowdy, perhaps, but how the public loved it! The Caterpiller is still going strong today, after more than two decades of coining money.

How are new rides invented? Ride men believe they are not invented; they evolve. You start with one idea, and it leads to another, and so on. For example, during World War I, a fellow by the name of Roehr had a job in a munitions plant. One day he got himself what was then a new idea, and constructed a small-sized auto truck which could be used to haul heavy materials around inside the big factory. Everybody wanted to take a ride in this little car. It was fun. Roehr kept this fact in the back of his mind. After the war he constructed a similar car equipped with heavy protective bumpers, electrically powered by a rod reaching up to make contact with an electrified metal roof. If several people rode in these little cars within a limited space, he figured, they could have a whale of a lot of fun trying to bump each other, or to avoid getting bumped. The idea was a knockout. Roehr sold his patent for $40,000.00, and the pleasure-crazy public had a new ride —The Dodgem—which has never lost its tremendous popularity. You’ve probably ridden in these little cars yourself, or their counterpart, The Skooter.

Down in Faribault, Minnesota, Herbert Sellner, back in 1925, conceived the idea of a water merry-go-round for use at beaches. He tried it out at a local beach and found it wasn’t practical. So he took his machine out of the water, added a few touches, and the fabulously successful Tilt-a-Whirl was born. Today, the Sellner Manufacturing Company is one of the leading riding device firms in the world, with Tilt-a-Whirls in operation from New England to New Zealand.

The riding device industry is international in scope; most of the rides are manufactured in the U. S. and shipped to England, France, South Africa, Brazil, Mexico—and before the war, to Germany and Japan. But a number of new rides have originated in Europe, notably the merry-go-round. European inventors are constantly striving to get their share of the rich pot of gold waiting for inventors in the riding device field.

As a matter of fact, hundreds of new ideas for rides flow into the offices of ride manufacturers in a steady stream, but not one in a hundred is even worth consideration, simply because the average inventor has no understanding of the technical requirements of the industry; he doesn’t, in fact, seem to know anything about anything—if you can believe the expert ride men. So if you think you’d like to try your luck in this fabulously successful field, which is certainly one of the best in the world for the amateur inventor, here are the facts you should know: The average successful ride is easily portable; it can be set up or dismantled in a few hours, and conveniently loaded into one or two trucks. If it is not portable, in this manner, it will be of no use to the richest and biggest ride market—the travelling carnival. A portable ride, on the other hand, is just as saleable to permanent amusement parks. In other words, you can sell a portable ride to any ride operator, but if it isn’t portable your market is limited to parks alone.

If you can figure out a way to make permanent park rides portable—such as the roller coaster—you’ve got yourself a million dollars; every big carnival company in existence would buy one, and wouldn’t hesitate to pay $50,000.00 for it. A coaster in a good location can make that much in a season. But on the other hand, just design a new and better type of coaster for parks and you’ll do all right, too; $5,000.00 royalty per coaster is considered a reasonable payment, and there might be 200 park owners scrambling for the new design.

Safety, of course, is a prime consideration no matter what type of ride you create. All amusement riding devices are perfectly safe and no new ride will be considered unless it is safe not only for adults but for small children; a big slice of riding device income comes from small kids, and a ride operator doesn’t want to kill off his customers! It is possible, however, to make even the most violent ride perfectly safe. But you’d be surprised how many would-be inventors never give this vital factor a thought.

Ease of operation is also important; one man can operate the average ride, with the aid of a cashier; a ride that requires more than three men to run it, after it is set up, is looked upon with disfavor by operators, who would rather not pay the salaries of four or five men if one or two would be sufficient. Simplicity of construction is also important, because the more complicated a ride is the more breakdowns there are likely to be. As many standard, interchangeable parts should be used as possible—parts that might be bought in any town. The ideal ride would probably be made up of standard auto parts, but thus far that’s only a carnival man’s dream; ordinarily, when a part breaks, a new one has to be obtained from the manufacturer.

Capacity is another important feature; a ride should be able to handle a minimum of 24 passengers at a time. The more the better.

Now we come to the really important part— marketing your new ride. Submitting the idea to manufacturers is just a waste of time, because they have learned, through years of costly experience, that they lose too much money that way —no matter how fascinating a new ride idea might seem, from every standpoint, the public alone will determine its success, and the manufacturer can’t tell in advance whether they’ll go wild over a certain new ride, or keep away in droves. So the only practical way to sell your idea is to make up a full-scale working model of your brain child, install it in a park or carnival, iron out all the bugs, and see how the public takes to it.

If it proves to be a money-maker, getting orders for it will be about as difficult as selling ice cold lemonade to people dying of thirst in the Sahara desert. You can manufacture it yourself, or sell, or lease, your patent rights to a regular concern.

So if you can think of a new way to twirl the world, better get out that blueprint paper and get busy. There’s a hefty pot of gold at the end of that rainbow—and it might just as well be for you.