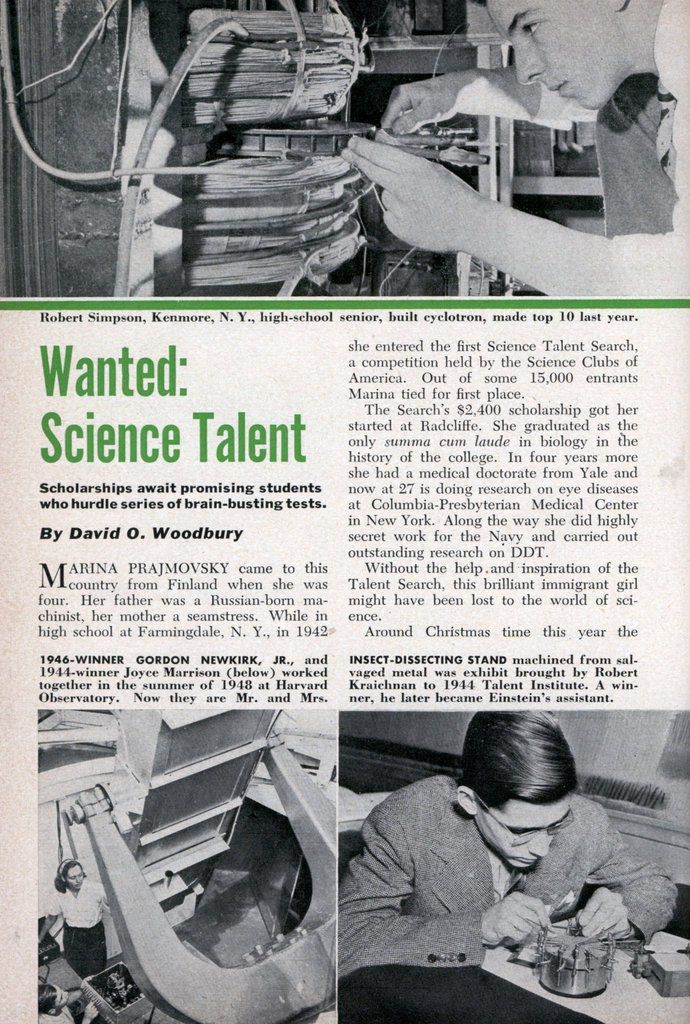 MARINA PRAJMOVSKY came to this country from Finland when she was four. Her father was a Russian-born machinist, her mother a seamstress. While in high school at Farmingdale, N. Y., in 1942 she entered the first Science Talent Search, a competition held by the Science Clubs of America. Out of some 15,000 entrants Marina tied for first place.

Without the help and inspiration of the Talent Search, this brilliant immigrant girl might have been lost to the world of science.

Around Christmas time this year the Search will launch its eleventh aptitude test for thousands of bright high-school seniors in every state. The kids will tackle the toughest two-and-a-half-hour exam of their lives; 300 of them, ranging from 15 to 18, will pass. The top 40 will go to Washington to be judged still more rigorously and eventually receive financial aid without which many of them could not go to college.

The other 260 will be recommended to colleges as exceptional material. In 10 years this good word has never failed to bring every winning contestant a scholarship offer. So far 3,000 winners have been launched on promising scientific careers, thus4 helping to fill the dangerously low pool of scientific man power.

Along with the aptitude test every candidate must hand in a 1,000-word essay on “my scientific project.” This means a piece of first-hand research, carried through to a finish. Science teachers everywhere coach their best students and help them find projects. To produce a Search winner is about the highest honor a school can have nowadays.

Thousands of bright kids can knock over the test, but the essay really weeds them out. It takes a natural-born scientist to carry out a useful research and report lucidly upon it at the age of 16. Yet, many of the papers read like reports by mature scientists.

Contestants Work Is of Real Value

Nancy Durant, a 15-year-old Negro girl from a Washington high school, handed in an essay proposing the use of sodium tungstate for fireproofing fabricsâ€”a valuable new method. Lee Hershenson, 16, from Pittsburgh, discussed synthetic rubber through 10 pages of intricate chemical formulas, a report worthy of commercial researchers in the field. Marina Prajmovsky’s essay, on osmosis in living tissues, was excitedly acclaimed by the university chemistry professor to whom it was referred.

The 1943 crop of essays discussed atomic energy so penetratingly that Search officials feared the Army might hush them all up. Instead, two of the contestants, drafted while still in college, found themselves on duty with the atomic-bomb project.

Every so often a natural mathematician turns up in STS. Saul Kravetz, 17, handed in a paper on “The Calculus of Variations”â€” a brain-buster exploring a problem still in debate by world experts. The judges were completely stumped by its six pages of solid equations and had to call in a Bureau of Standards specialist to tell them what they meant.

Talent Search disclaims any effort to pick geniuses. It merely uncovers talent for pioneering and original thinking. All-around citizens in the making, these are the men and women who will dedicate themselves to lifetimes of service, most of it modestly paid.

About a third of the winners come from towns of less than 10,000 population. Many earn their own way as professional musicians, mechanics, stenographers, gardeners and store workers. Without exception these talented youngsters’ interests cover many fields. All of them belong to school clubs, many are letter athletes. Others write for the school paper or go in for dramatics.

War Pointed Up Need for Scientists

Though the Search is now recognized as a vital contributor to the ranks of American scientists, it started in an offhand way. Early in 1942 the sudden pressure of war produced a crying need for scientific brains. G. Edward Pendray, then with Westinghouse Electric, was attempting to set up a national organization of school science clubs around a nucleus of a few already in exist-ence around New York. It wasn’t going well. Watson Davis, director of Science Service, a nonprofit educational organization in Washington, heard of Pendray’s troubles and offered to take over the job. Science Clubs of America was thus formed. From Westinghouse, Davis inherited Margaret E. Patterson, a former science teacher. “Pat” at once became the moving spirit of the clubs.

But Davis, Pendray, Miss Patterson and Dr. Harlow Shapley, who was president of Science Service, agreed that the science clubs were not enough. Something more ought to be done with the talent they were turning up. The result was the Science Talent Search, aided by a yearly $11,000 grant for scholarships from the Westinghouse Educational Foundation.

Davis found two psychologists, Dr. Harold A. Edgerton and Dr. Steuart Britt, both with long experience in devising aptitude tests. He asked them to work out a contest scheme that would avoid narrow geniuses but be sure-fire in selecting the topnotch talent upon which scientific progress depends.

The experts came up with a four-way screen: a tough test, a character recommendation from the entrant’s science teacher, the student’s school record, and an essay. This is called the “successive-hurdles method.” Most of the youngsters trip over the first, a few more at the second and third. It is the essay that points to the real talent.

This is how a typical Search works today: The minute the schools open, Miss Patterson begins reminding thousands of teachers and science-club sponsors to prepare their best students for the fray. Early in December comes the great exam, held by each school under the honor system. Talent Search spends the whole year gathering new test questions; the exam is made so difficult that few college presidents could pass it. The two-and-a-half-hour grind covers a dozen pages of selective-choice questions, and the test is full of jokers to trap the unwary and the chap who doesn’t think.

There is a generous infusion of diagrams. But the real brain-busters come toward the end in a section devoted to long, abstruse descriptions that end with questions you can’t answer until you have cut through the blather to the data hidden beneath it.

Nobody ever made 100 percent on a Search testâ€”most scores are in the region between 50 and 70 percent. Mighty few get into the 90-percent class.

Around Christmas time the Science Service offices burn their lights all night, as the tests are graded. Gradually, of the 15,000 or more students who have competed, all but 400 have been weeded out. Not till then are the essays read.

Four experienced readers tackle the essays, . judging them on originality, completeness and “scientific potential.” With the preliminary selecting done, four judges agonize over the slight differences among 300 brilliant survivors. The list is finally pared to 40 “finalists” and 260 “honorable mentions.” It is a wonderful day for those 40 when, in January, they receive a telegram which begins: “Congratulations. You have won a Washington trip . . .”

In early March the five-day Institute begins, and the happy finalists descend upon the capital. There are sight-seeing tours, talks with top scientists, special parties in government laboratories, receptions by Representatives and Senators, presentations to the President.

Now the final cut is made to pick the two top winners and the eight runners-up. Every contestant must submit to the exquisite torture of a recorded interview with each of the four judges. In these star-chamber proceedings anything can happen. Shapley, for instance, likes to fire at his victims such a bombshell as this: “Two days from now a billion-ton asteroid will hit Washington. You are in charge of everything. What will you do?”

Most kids keep their nerve and turn in thoughtful answers. When it is all over, the top winners are announced at a final banquet and the youngsters go home.

The Talent Search staff later makes breakdown studies of the winners and their backgrounds. Their parents form a good cross section of the American middle class. A few fathers are famous scientists; sometimes the mothers are also. But mainly the mothers are homemakers only and the fathers are fanners, businessmen, shopkeepers, ministers and teachers. Two things seem to count most: good school equipment and teachers of high skill.

Even in a short 10 years the validity of the Search idea has been established by the achievements of its product. Girls and boys alike are already crowding established scientists for honors in some fields. Besides the remarkable Marina Prajinovsky, there is Carol Pike, who has become a chemical engineer and a founder of the world’s first Society of Woman Engineers. There is Rodman Jenkins, who won a degree at M.I.T, at the age of 17 and is now in advanced research on petroleum in Texas. Wolf Karo holds a top-ranking job with the National Advisory Committee for Aeronautics in Cleveland, and is developing new fuels for jets and rockets.

Paul Teschan and Paul Cranefield are two more outstanding successes. Teschan was already headed for medicine when the Search found him in 1942. In college he got interested in research on kidney ailments, but the one hospital in Boston where such work was done would not take him on. He was too young, they said. Then he got into the Army and wound up at Walter Reed Hospital as a laboratory assistant. Now he is a department director there, a leading authority on uremia and the inventor of an artificial kidney technique he hopes will cure it.

Paul Cranefield, meanwhile, is doing a quiet job at a Madison, Wis., laboratory on cardiac injury and epilepsy. He has a mild form of epilepsy himself, and the chances are that if STS hadn’t found him he would never have become a scientist at all. Some day every epileptic in the world may have reason to thank the Search for Paul Cranefield, for he is on the track of a solution to their ills.

Scientist Must Combine Many Talents

Some years ago Dr. Vannevar Bush addressed the Search banquet in these inspiring words:

“In the exploration of the unknown the price of one success is often many failures. The ability to detect failure early, and the capacity to abandon a line of approach, however treasured and however far committed, are vital elements in the complex compound of plan, reason, patience and courage out of which new knowledge is gained.

“The great quality is not simply to be able to stand up under disappointments, but to do so without losing the zest and exhilaration that should attend success.”

Fortunately for America, the Science Talent Search is finding thousands of young people who will follow this ideal.