For comparison, when the modern descendant of these atom smashers, the Large Hadron Collider, comes fully online it will accelerate protons to 7 trillion electron volts. They will be travelling at 99.9999991% the speed of light and have an effective mass 7460.52 times what they have at rest. This is so fast that even though they will be making 11,000 orbits around the 27km ring per second, from the proton’s perspective time dilation will make each orbit seem to last about 2 minutes. 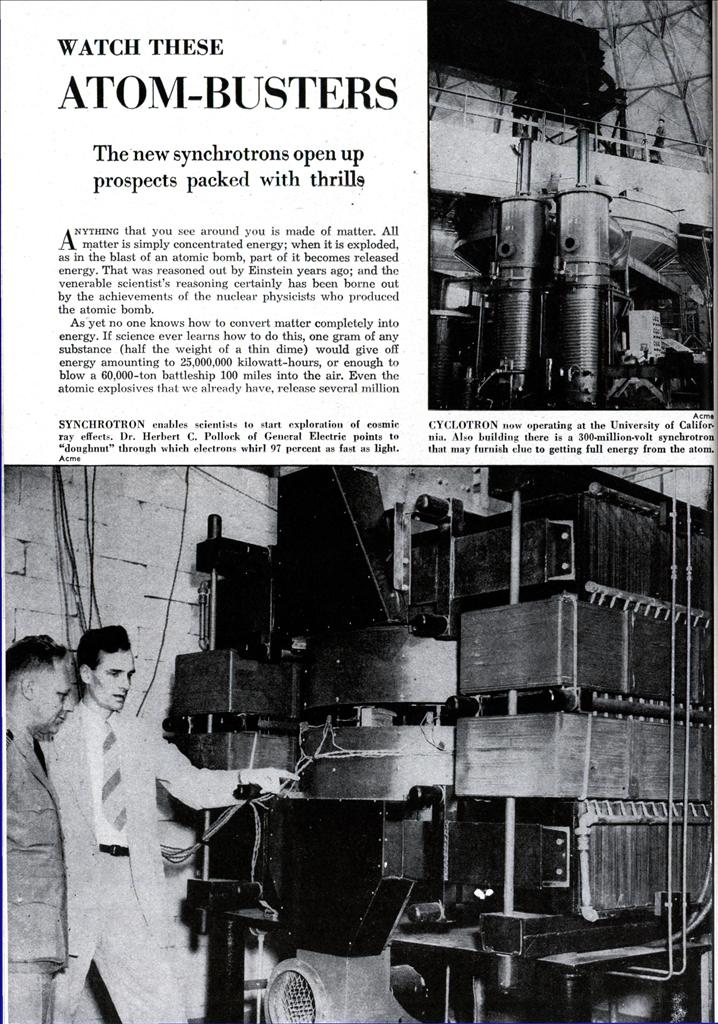 The new synchrotrons open up prospects packed with thrills.

Anything that you see around you is made of matter. All matter is simply concentrated energy; when it is exploded, as in the blast of an atomic bomb, part of it becomes released energy. That was reasoned out by Einstein years ago; and the venerable scientist’s reasoning certainly has been borne out by the achievements of the nuclear physicists who produced the atomic bomb.

As yet no one knows how to convert matter completely into energy. If science ever learns how to do this, one gram of any substance (half the weight of a thin dime) would give off energy amounting to 25,000,000 kilowatt-hours, or enough to blow a 60,000-ton battleship 100 miles into the air. Even the atomic explosives that we already have, release several million times as much energy as we can get out of coal or oil.

If the atom can be mastered, if science can learn all of its secrets, the prospect is that present power can be multiplied not by millions but by billions. That is why scientists are so greatly interested in nuclear physics and the atom-smashers.

Outstanding event of the 1946 science year was the turning on, in October, of General Electric Company’s atom-smashing synchrotron. This new equipment at Schenectady was not the first of its line, as a small 8,000,000-volt machine went into operation in England some months earlier. Last November the University of California put into service its new 4,000-ton cyclotron, and is now readying a synchrotron, much larger than GE’s, which will soon be creating an electron beam of 300,000,000 volts. Columbia University has announced the building of its. own cyclotron. Carnegie Institute of Technology will build a synchro-cyclotron. In all, as many as 50 of the atom-smashers have been, or are being built. They will be much in the news; they may make the year’s biggest news.

Cyclotron and synchrotron: what are they like, and just what do they do?

Both are devices for giving tiny particles the highest possible velocities, up close to the velocity of light itself (186,000 miles per second). The chief difference between them is that the cyclotron works on atom-size particles of matter, while the synchrotron uses electrons, which are atoms of electricity. This leads to further differences, for the atomic nuclei have a positive charge, while the electrons are negative. And an electron has only 1/2,000 the mass of even the smallest atomic nucleus, and can be speeded more easily.

The first cyclotron was designed by Dr. E. O. Lawrence at the University of California in 1931. Along with others built in America since then, it provided much of the information that made possible the atomic bomb.

In all cyclotrons atomic nuclei are whirled in a hollow drum, which is surrounded by a strong magnetic field. The drum, in effect, is divided into two halves, each shaped like a capital D, the halves separated by an electrical gap. Each time the particles shoot across the gap they are given an electrical spanking which increases their speed the next time around. The atomic particles make each round trip in millionths of a second. Speed is important, but it cannot be increased indefinitely, as the particles tend to lag behind the cyclotron’s timing system.

Making the cyclotron bigger will not attain a voltage high enough to reproduce the effects of cosmic rays—one of the most important goals of present-day nuclear physics. The largest cyclotron to date has a capacity of about 200 million volts. The atom-smashers want to go much higher. The problem! has been to develop a machine that! would operate under incredibly high energies—a billion volts or more. That’s! where the synchrotron comes in.

This atom-smasher was invented by Prof. E. M. McMillan of the University of California, who is now building the 300-million-volt machine. Quite independently, Prof. V. I. Veksler in Russia devised the same thing. The 70-million-volt synchrotron already in operation at Schenectady was designed by a GE group led by Dr. Herbert C. Pollock.

The synchrotron can go up as high as 300 million electron volts, though the one at Schenectady produces a modest 70 million.

Where the cyclotron had the drum at the center, the synchrotron has a hollow glass doughnut. Now the particles being whirled and speeded are electrons. Injected from a hot filament,they speed around the doughnut under the accelerating force of a magnetic field, going ever faster. By the time they have acquired energies of about 2,000,000 volts they are moving at 97 per cent of the speed of light.

Even so, the scientists want still higher energies.

Until recently, a strange effect called “relativity-mass” has prevented the increase of energy at high velocity. It is the synchrotron’s ability to overcome this effect that makes it such an important, and highly interesting, tool for scientific research.

Einstein predicted relativity-mass many years ago. He calculated that the speed of any particle can never exceed the speed of light; as it approaches that speed its mass increases until all acceleration stops. Physicists today know that Einstein’s predictions were accurate: an electron with a 300,000-volt push behind it is 600 times heavier than normal.

Regular volts by the billions

It took a small radio transmitter to pole-vault physicists over the relativity-mass obstacle. This transmitter, a 163-megacycle oscillator, is connected to a gap on the inside of the synchrotron doughnut. As the electrons reach 2,000,000-volt energies, and settle down to practically constant speed, the transmitter turns on automatically.

In the transmitter’s oscillating field the electrons quickly get in step and come around in groups, receiving an increase in energy each time they go past. In this way energies of 300.000,000 volts will be obtained in the new California synchrotron. In time energies running into billions of volts may be possible.

Why do physicists want such enormous energies in their atom smashers?

They want to duplicate the effects of cosmic rays. These rays, mysterious high-energy particles shooting in from outer space, collide with atoms in the atmosphere at an altitude of 150 to 200 miles and produce great quantities of sub-atomic particles called mesons.

These small particles, themselves a product of multi-billion-volt cosmic-ray bombardment, in turn are able to disrupt the atoms of carbon, nitrogen, and oxygen. The search for the meson is, therefore, one objective of today’s synchrotron research. Mesons have never been released or observed in the laboratory; they remain a deep and fascinating mystery.

Most puzzling is the fact that they seem to have a life of only two millionths of a second. Almost as soon as they are born of the collision between cosmic rays and atmosphere atoms they are gone in a puff of concentrated energy.

If mesons can be generated in the laboratory, science will be on its way toward the ultimate gamble, the complete conversion of matter into energy. Few, if any, of the experts believe that this can be done. But any advance toward the goal can mean an end to drudgery for many millions—or, in Warfare, a cataclysmic end-of-everything