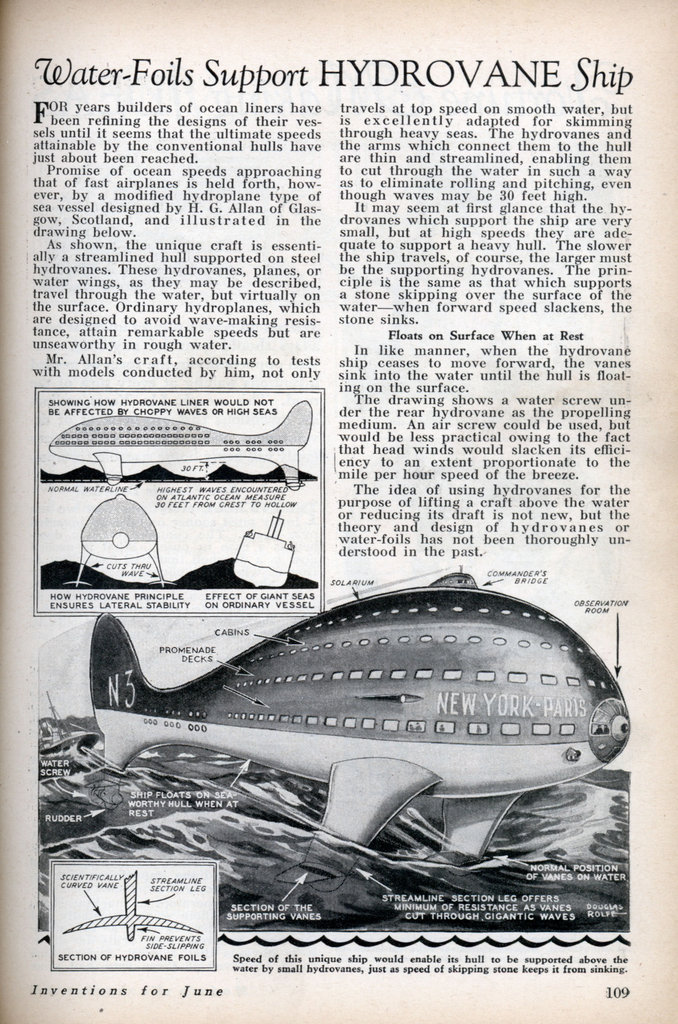 FOR years builders of ocean liners have been refining the designs of their vessels until it seems that the ultimate speeds attainable by the conventional hulls have just about been reached.

Promise of ocean speeds approaching that of fast airplanes is held forth, however, by a modified hydroplane type of sea vessel designed by H. G. Allan of Glasgow, Scotland, and illustrated in the drawing below.

As shown, the unique craft is essentially a streamlined hull supported on steel hydrovanes. These hydrovanes, planes, or water wings, as they may be described, travel through the water, but virtually on the surface. Ordinary hydroplanes, which are designed to avoid wave-making resistance, attain remarkable speeds but are unseaworthy in rough water.

Mr. Allan’s craft, according to tests with models conducted by him, not only travels at top speed on smooth water, but is excellently adapted for skimming through heavy seas. The hydrovanes and the arms which connect them to the hull are thin and streamlined, enabling them to cut through the water in such a way as to eliminate rolling and pitching, even though waves may be 30 feet high.

It may seem at first glance that the hydrovanes which support the ship are very small, but at high speeds they are adequate to support a heavy hull. The slower the ship travels, of course, the larger must be the supporting hydrovanes. The principle is the same as that which supports a stone skipping over the surface of the waterâ€”-when forward speed slackens, the stone sinks.

Floats on Surface When at Rest

In like manner, when the hydrovane ship ceases to move forward, the vanes sink into the water until the hull is floating on the surface.

The drawing shows a water screw under the rear hydrovane as the propelling medium. An air screw could be used, but would be less practical owing to the fact that head winds would slacken its efficiency to an extent proportionate to the mile per hour speed of the breeze.

The idea of using hydrovanes for the purpose of lifting a craft above the water or reducing its draft is not new, but the theory and design of hydrovanes or water-foils has not been thoroughly understood in the past.