Popular Mechanics
Issue: May, 1924
Posted in: General
2 Comments on Water Veil Guards Walls of Skyscraper (May, 1924) 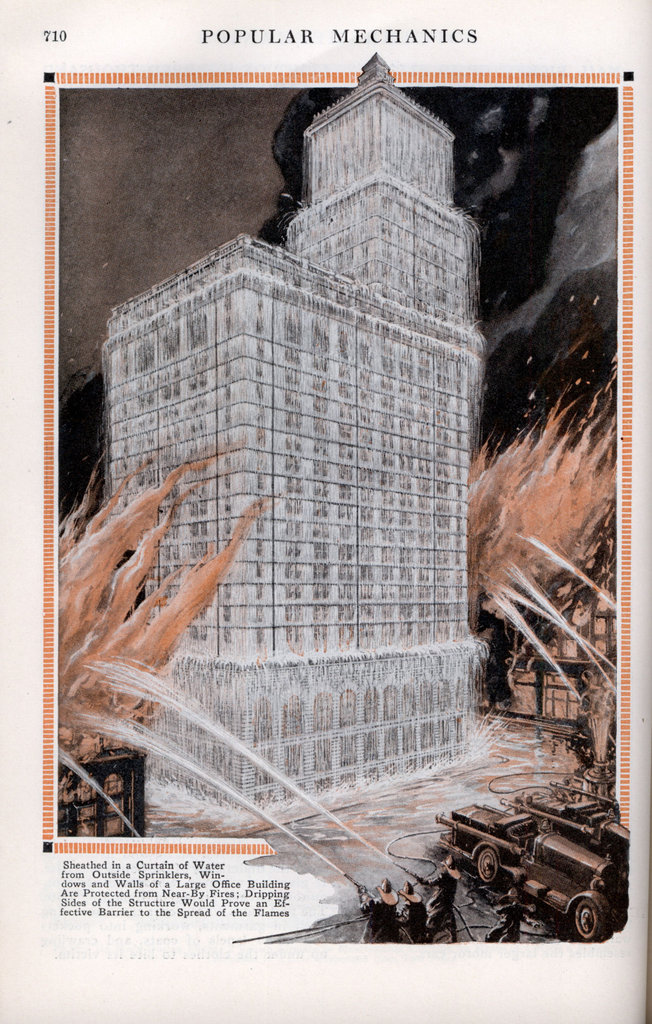 CONNECTED to powerful pumps, a network of 291 sprinklers on the outside of the new Union Central Life Insurance company’s building in Cincinnati, Ohio, has been installed to bathe the structure’s upper stories in a protecting curtain of water in case of a severe fire in the neighborhood. The sprinklers are similar to those used in interiors, but operate only when the pumps are started.

This installation, said to be the first of its kind on a building of this type, was adopted largely because of the lesson taught by a disastrous fire in Chicago, in 1922, when flames leaped an eighty-foot street, melted windows of heavy wire glass and devoured the contents of several upper floors of a steel skyscraper. The blaze proved that a modern “fireproof” structure, though amply guarded against flames by interior sprinklers, may not be immune from an outside attack. The conflagration further showed that, even if the flames do not actually break through, the wire-glass windows, capable of withstanding from 1,500 to 1.700 degrees Fahrenheit, radiate sufficient heat to endanger books and papers and other inflammable materials. The system is divided into six units, each placed where it will best protect the exposed sides of the building. Water is supplied directly from the city mains and from storage tanks in the upper floors. Approximately 5,000 linear feet of galvanized pipe, weighing 14,000 pounds, were required to connect the sprinklers.

The “feeders” are attached to the build-ing by fasteners in holes drilled into the exterior terra cotta. Sprinklers are turned downward so they will drain, and are pointed directly at the windows. In case of danger from an outside fire, pumps are started, control valves on the top floor where the entire system is managed, are opened, and, in a short time, the upper stories are bathed in a protecting film of water, pouring at the rate of 2,550 gallons a minute at fifty pounds pressure, upon the outside of the windows.