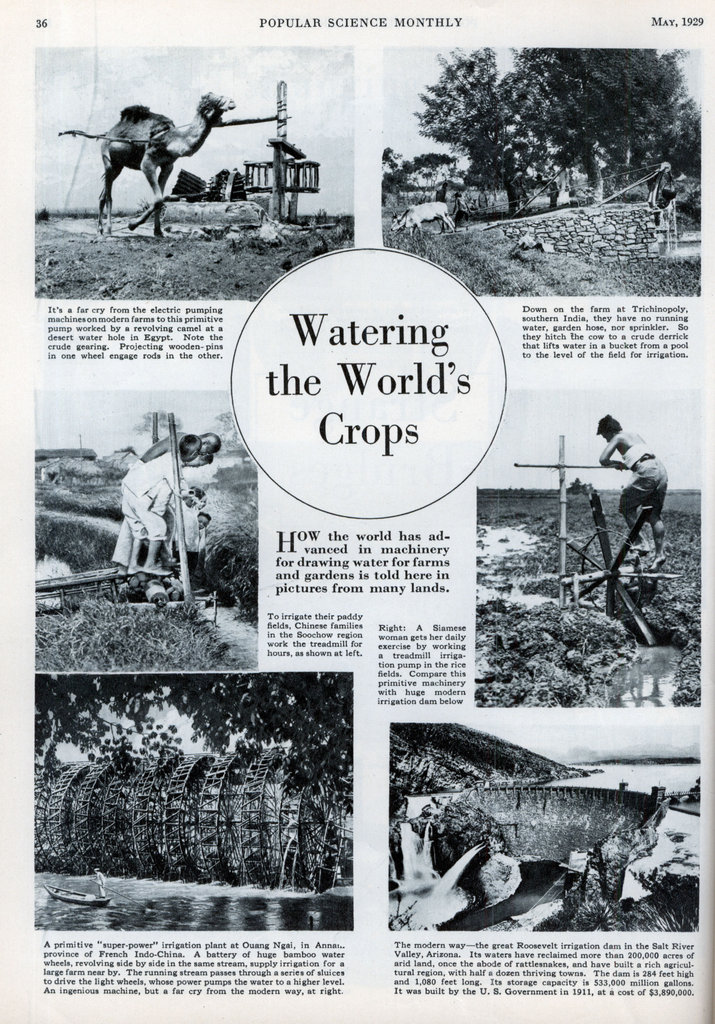 HOW the world has advanced in machinery for drawing water for farms and gardens is told here in pictures from many lands.

It’s a far cry from the electric pumping machines on modern farms to this primitive pump worked by a revolving camel at a desert water hole in Egypt. Note the crude gearing. Projecting wooden- pins in one wheel engage rods in the other.

To irrigate their paddy fields, Chinese families in the Soochow region work the treadmill for hours, as shown at left.

A primitive “super-power” irrigation plant at Ouang Ngai, in Annan, province of French Indo-China. A battery of huge bamboo water wheels, revolving side by side in the same stream, supply irrigation for a large farm near by. The running stream passes through a series of sluices to drive the light wheels, whose power pumps the water to a higher level. An ingenious machine, but a far cry from the modern way, at right.

Down on the farm at Trichinopoly, southern India, they have no running water, garden hose, nor sprinkler. So they hitch the cow to a crude derrick that lifts water in a bucket from a pool to the level of the field for irrigation.

Right: A Siamese woman gets her daily exercise by working treadmill irrigation pump in the rice fields. Compare this primitive machinery with huge modern irrigation dam below The modern wayâ€”the great Roosevelt irrigation dam in the Salt River Valley, Arizona. Its waters have reclaimed more than 200,000 acres of arid land, once the abode of rattlesnakes, and have built a rich agricultural region, with half a dozen thriving towns. The dam is 284 feet high and 1,080 feet long. Its storage capacity is 533,000 million gallons. It was built by the U. S. Government in 1911, at a cost of $3,890,000.