Mechanix Illustrated
Issue: Jan, 1948
Posted in: Computers, Impractical, Sign of the Times
Tags: environment
No Comments on We CAN Control the Weather! (Jan, 1948)

Very interesting if somewhat optimistic article about weather prediction and control. Their secret weapon is a new computer with an very impressive (for the time) 20K of memory which will allow them to predict the weather and model the effects of any potential interventions.

To show just how off they were in terms of necessary processing power, check out the list of Weather Modeling machines on the the top 500 supercomputer list. The fastest has 1020 processors and 4TB of memory.

My favorite of their weather control techniques has to be creating giant oil slicks off the Florida coast and setting them on fire to deflect a hurricane. 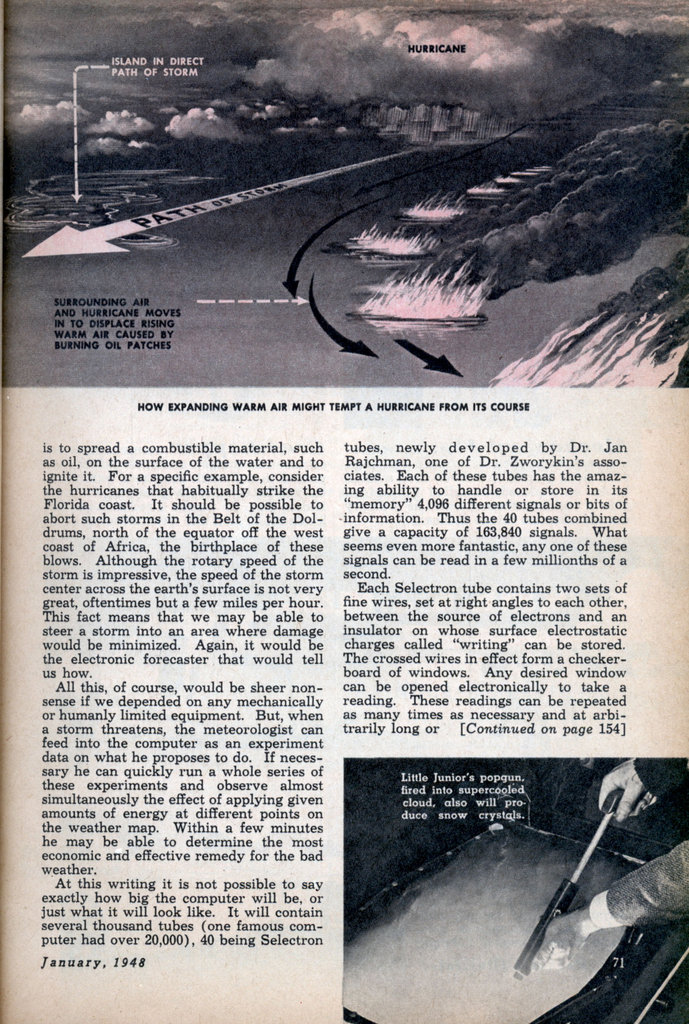 We CAN Control the Weather!

BY WILLIAM WINTER, based on an interview with DR. VLADIMIR K. ZWORYKIN, Vice President and Technical Consultant, RCA Laboratories

WHEN Mark Twain made his famous quip that everyone talked about the weather but that no one ever did anything about it, he had no way of knowing that the science of electronics, even then in its infancy, not only would promise a revolution in forecasting but would show the way to actually control the elements.

Yes, thanks to electronics we soon will be able to predict in a few minutes the weather for several days ahead. Even more important, man may be able to prevent the development of hurricanes and other violent storms, or divert them, prevent killing frosts, eliminate local fogs, and even cause rain to fall in regions of drought. The benefits to aviation and agriculture alone would be tremendous, to say nothing of the direct savings in lives and property.

Many earlier attempts at controlling the weather will spring to mind. By dropping “ice seeds” or electrified sand from airplanes clouds have been forced to give up their moisture as rain. The Swiss have dispelled threatening hailstorms by setting off explosives. Other smaller but, perhaps, more familiar methods of weather control may be found in the smudge fires that protect our citrus groves from frost and in Fido, the system developed by the British for clearing fog from airplane runways by burning oil. But, although local emergencies frequently justify the cost of such measures, their application on a grand scale would be prohibitively expensive. Such methods are the equivalent of locking the stable door after the horse is out. The trick is to interfere with a dangerous weather condition when it forms, rather than fight it as a full-blown hurricane.

Until now this was a remote possibility, indeed. It is the development of the electronic computer as a means of weather forecasting that will permit meteorologists to tell where and how they can apply man-made corrective measures to the weather.

At present a meteorologist has two ways of making a forecast. After assembling data on pressure, temperature, humidity and wind velocity at various altitudes, gathered at weather stations over a wide area, he can apply the laws of physics to the motion of air masses, the formation of cloud systems, the absorption of solar energy by the atmosphere, and other weather phenomena. If this sounds complicated, it is complicated â€”so much so, in fact, that rather general formulas must be substituted for the desirable but time-consuming fundamental calculations. The second method involves the comparison of the weather map with earlier maps for which the subsequent weather has been recorded. For accurate forecasting the meteorologist needs to blend both methods. But he cannot. By the time we could ascertain that it Was going to rain, it would be raining. Accurate prediction by present methods is hopelessly slowâ€”but the work that now would occupy the forecaster for two or three days can be handled in as many minutes by the electronic computer, now being developed by the RCA Laboratories as a joint project with the Institute for Advanced Study.

A few examples may point up the importance of this instrument to science. Let us assume that it is important to predict the position of the moon 200 years from now. The best mathematicians working with the best Comptometers would require 50 years to find the answer. The electronic computer can solve the problem in two to three hours. The multiplication of two numbers of as many as twelve digits (one thousand billions) can be completed in several millionths of a second. It is this incredible speed that enables the computer to solve complex weather data in a matter of minutes.

How do you control a hurricane? Nature supplies many clues. For example, large cloud masses rise to great altitudes at certain times of the day over south sea islands. Recurrent thunderstorms have been found to center over large burned and blackened areas in Africa. We know that the heat of the sun’s rays causes air to rise and that, when in rising that air becomes sufficiently chilled, condensation and rain will follow. When there is a temperature differential at the surface, such as over an island and the surrounding cooler water, the rising warm air will suck in the adjacent cooler air, thus setting up a circulation that rapidly builds up energy in a cloud or storm formation.

According to Doctor V. K. Zworykin, “The hope for effective weather control rests in the fact that the condition preceding many of the weather processes which it may be desirable to control is essentially unstable or metastable, characterized by the accumulation of large amounts of potential energy during an extended period. Thus, while the energy finally released may be enormous, that required to trigger the release may be quite modest.” Man can trigger the release of this energy with the guidance of the computer and by using nature’s principles or weather making.

There are two ways to do this. One is the use of strategically located “weather control patches” or carbon-blackened areas which would vary the rate of absorption of solar heat. (Remember the African thunderstorms?) The rate of absorption of these patches can be controlled by covering them with artificial fog. Properly applied, these patches would artificially create a circulation of rising air that could precipitate a budding storm on the spot. The second method is to spread a combustible material, such as oil, on the surface of the water and to ignite it. For a specific example, consider the hurricanes that habitually strike the Florida coast. It should be possible to abort such storms in the Belt of the Doldrums, north of the equator off the west coast of Africa, the birthplace of these blows. Although the rotary speed of the storm is impressive, the speed of the storm center across the earth’s surface is not very great, oftentimes but a few miles per hour. This fact means that we may be able to steer a storm into an area where damage would be minimized. Again, it would be the electronic forecaster that would tell us how.

All this, of course, would be sheer nonsense if we depended on any mechanically or humanly limited equipment. But, when a storm threatens, the meteorologist can feed into the computer as an experiment data on what he proposes to do. If necessary he can quickly run a whole series of these experiments and observe almost simultaneously the effect of applying given amounts of energy at different points on the weather map. Within a few minutes he may be able to determine the most economic and effective remedy for the bad weather.

At this writing it is not possible to say exactly how big the computer will be, or just what it will look like. It will contain several thousand tubes (one famous computer had over 20,000), 40 being Selectron tubes, newly developed by Dr. Jan Rajchman, one of Dr. Zworykin’s associates. Each of these tubes has the amazing ability to handle or store in its “memory” 4,096 different signals or bits of information. Thus the 40 tubes combined give a capacity of 163,840 signals. What seems even more fantastic, any one of these signals can be read in a few millionths of a second.

Each Selectron tube contains two sets of fine wires, set at right angles to each other, between the source of electrons and an insulator on whose surface electrostatic charges called “writing” can be stored. The crossed wires in effect form a checkerboard of windows. Any desired window can be opened electronically to take a reading. These readings can be repeated as many times as necessary and at arbitrarily long or short intervals. The reading is simply an on or off signal. It might be compared to scanning the pigeonholes of a desk to ascertain quickly which contain papers.

Dr. Zworykin states that weather control by means of electronic guidance would be exercised only over a limited region. To be applied on a global scale, there would have to be co-operation between the peoples of the earth.