Science And Mechanics
Issue: Jan, 1934
Posted in: General
Tags: optical illusions
2 Comments on We Do Not See Alike! (Jan, 1934) 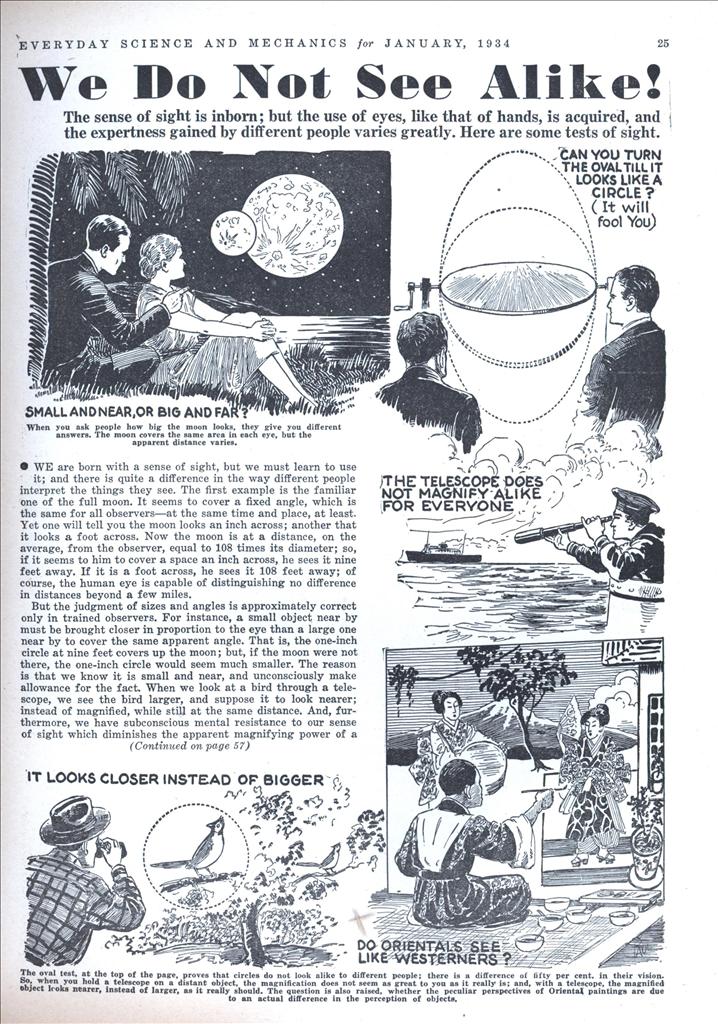 We Do Not See Alike!

The sense of sight is inborn; but the use of eyes, like that of hands, is acquired, and the expertness gained by different people varies greatly. Here are some tests of sight.

WE are born with a sense of sight, but we must learn to use it; and there is quite a difference in the way different people interpret the things they see. The first example is the familiar one of the full moon. It seems to cover a fixed angle, which is the same for all observers—at the same time and place, at least. Yet one will tell you the moon looks an inch across; another that it looks a foot across. Now the moon is at a distance, on the average, from the observer, equal to 108 times its diameter; so, if it seems to him to cover a space an inch across, he sees it nine feet away. If it is a foot across, he sees it 108 feet away; of course, the human eye is capable of distinguishing no difference in distances beyond a few miles.

But the judgment of sizes and angles is approximately correct only in trained observers. For instance, a small object near by must be brought closer in proportion to the eye than a large one near by to cover the same apparent angle. That is, the one-inch circle at nine feet covers up the moon; but, if the moon were not there, the one-inch circle would seem much smaller. The reason is that we know it is small and near, and unconsciously make allowance for the fact. When we look at a bird through a telescope, we see the bird larger, and suppose it to look nearer; instead of magnified, while still at the same distance. And, furthermore, we have subconscious mental resistance to our sense of sight which diminishes the apparent magnifying power of a telescope. One of only or 2 diameters magnifying power does not seem to us to magnify at all, when we look through it. A test of this is to take a glass; look through it and estimate the power. Then look through it at some object which affords a comparison, like a yardstick or a brick wall. Look at the same field with one eye through the telescope, and through the other without artificial aid. Count the lines in the field and then those outside it, against the apparent circle of the telescope’s lens. The ratio between them is the magnifying power, and it will be found more than you expected, as a rule.

Again, take an oval piece of cardboard and fix it on a standard, so that you can turn it. Stand, with your eye sighting along the greatest length of the oval; and turn it until it seems to be a circle. Now, if you will make measurements (as by sighting a pencil on it and taking the length with your thumb) you will find that it really covers the area of an oval with its shortest diameter toward you. In other words, you are not believing your eyes, but endeavoring to change what you see into what you think is there. In testing two hundred subjects, says Dr. Robert H. Thouless, of the University of Glasgow (Scotland), not one reached the correct angle, and there was a great range of differences in their judgment. To this and allied effects, he gives (in an article in “Nature,” London) the name of “phenomenal retrogression.”

For instance, he points out, if a white paper is placed under lower illumination than a gray one, so that it really reflects less light to the eye, it may yet seem brighter. Probably many readers have noticed the apparent difference in the distances, at night, of a red and a green light on the same signal post.

The high degree of “phenomenal retrogression” among members of Asiatic races tested leads Dr. Thouless to conjecture that the difference in perspective in Oriental paintings, from that in Western drawings, is due to a racial difference. However, the fact that medieval European drawings are rather Oriental in their perspective may shake this theory. And, in view of the effects here described, the artist who draws his perspective lines mathematically exact is erring in the opposite direction from the Persian painter. A photograph of a building, for instance, differs from the effect the eye receives, because the eye changes its focus in looking from one end to the other, and the brain then alters the report from the eye, to suit its own preconceived notions.