Well, the headline certainly does grab your attention. This is a gimmick MI has used before. 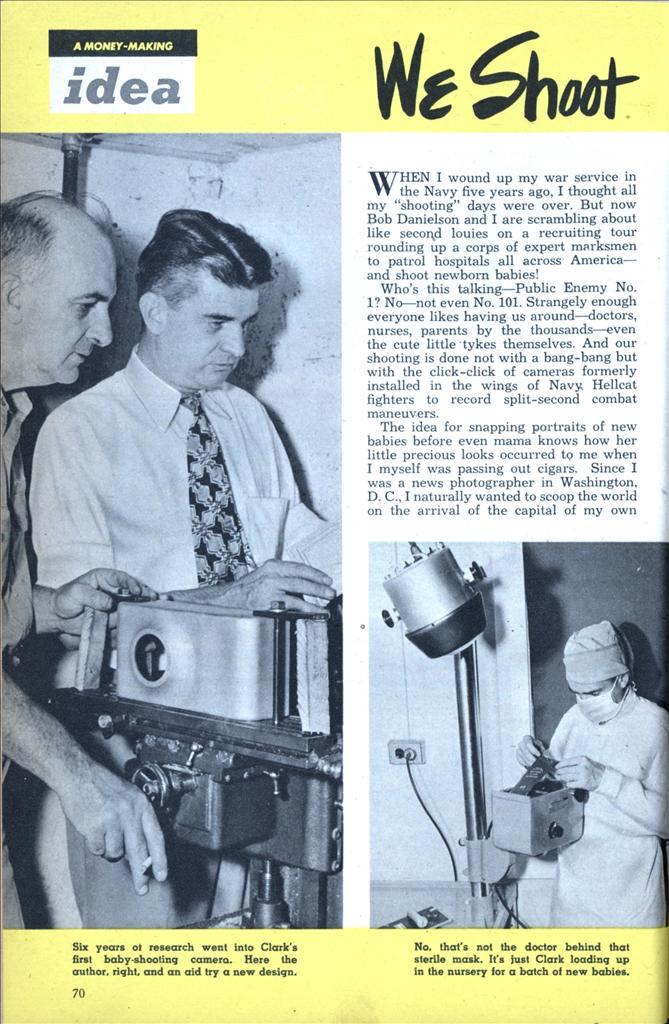 WHEN I wound up my war service in the Navy five years ago, I thought all my “shooting” days were over. But now Bob Danielson and I are scrambling about like second louies on a recruiting tour rounding up a corps of expert marksmen to patrol hospitals all across America— and shoot newborn babies!

Who’s this talking—Public Enemy No. 1? No—not even No. 101. Strangely enough everyone likes having us around—doctors, nurses, parents by the thousands—even the cute little tykes themselves. And our shooting is done not with a bang-bang but with the click-click of cameras formerly installed in the wings of Navy Hellcat fighters to record split-second combat maneuvers.

The idea for snapping portraits of new babies before even mama knows how her little precious looks occurred to me when I myself was passing out cigars. Since I was a news photographer in Washington, D. C., I naturally wanted to scoop the world on the arrival of the capital of my own baby boy. The hospital, though, refused to let me take his picture. It seems they thought that if I didn’t scare him to death with the flash, the nasty little germs in my old shutterbox might get him. But it’s not so easy to squelch a good newspaperman.

On the second day after the big event I slipped into my wife’s room when the baby was with her—and just happened to have an extra camera handy under my coat. I shot a fast picture of my two-day-old son, then raced out to develop it.

Its clarity and personality surprised everyone including Papa. For the next few days I was so busy grinding out prints for relatives and friends of the family I hardly had time to visit the hospital.

I started wondering how I could work out a scheme to take pictures of newborn babies without having to fear for my life if I got caught with a camera in the hospital nursery.

I had a lot of high hurdles to clear, though, before I perfected a photo setup that would satisfy the rigid hospital stand- ards of sanitation and safety—and at the same time take good pictures.

“Your equipment will have to function automatically and be so simple any nurse can operate it,” doctors insisted.

But they did like the idea of new-baby photos as an additional means of identification to prevent the possibility of tragic mixups. And from my point of view, I felt sure the proud parents would show their delight in the photo service by buying lots of pictures.

Just as I was settling down to work out a practical system for baby shooting that would make everybody happy, the Japs upset all my personal plans by blasting Pearl Harbor. I shelved the baby project and sailed off to join the Navy.

Even at war, though, I didn’t forget my idea. Later, while I was serving as photographic officer aboard the big carrier Midway, a machinist pal and I spent our spare time studying the Fairchild K-25 aerial, camera that we were using in the wings of our F6F fighters.

I kept wondering if they might be converted for my baby-shooting idea.

Although the K-25 had the right shutter speed, there were other major problems I had to work out first. For one thing, to take a picture at a fixed distance in the hospital nursery, the camera had to be regeared. For another, it had to wind the film and be ready automatically for the next exposure.

After the war, I plunged headlong into the baby business again. I wrote hundreds of letters to manufacturers to find someone who could make special lenses, shutters, motors and speed reducers for a redesigned aerial camera. I never found anyone who had in stock the exact equipment I wanted. I still have to hire an expert machinist to make up by hand the special parts I need for my cameras.

Getting the proper light for photographing babies was tough. A constant light causes baby to squint—or, worse yet, makes those big, beautiful eyes shut tight. Finally, an invention by Dr. Harold Edgerton of Massachusetts Institute of Technology helped me solve the lighting problem. I synchronized my aerial camera with Dr. Edgerton’s highspeed, repeating flashlight. With this arrangement, I found I could snap baby’s picture in quick, gentle light, no stronger than daylight. Doctors approved this setup since it was completely safe for baby’s tender eyes.

After a total of six years’ experimental work in perfecting the first practical camera for my hospital project, I decided to try it out at Keyser, West Virginia. Like the stage show that opens on the road before its Broadway appearance, I wanted to test my equipment on a small scale before installing my photo “show” in Washington’s big Garfield Memorial Hospital. The debut was a success and got good notices from both doctors and parents.

So, I moved into big time at Garfield. The installations there cost me about $3000. I amortized this outlay over a five-year period as a part of my stay-in-the-black program.

The Garfield units began to pay off immediately after I had installed them. Others that I have set up in hospitals along the Eastern Seaboard and in Missouri, Texas and Oregon also are hitting the jackpot. In January, 1949, I teamed up with Bob Danielson, an alumnus of the Harvard Graduate School of Business Administration and formed the Hospital Pictures Service Corporation. He’s pooled his resources with mine and taken over the business side while I concentrate on the technical angle. “Easy does it” is our motto. We prefer building up slowly and letting the business pay as it rolls along.

Biggest expense in our business, we find, is the cost of making the cameras. Though we had to redesign the K-25 to fit our non-combat needs, we still use ordinary roll film and film processing and enlarging equipment of standard commercial make. Demands for Hospital Pictures Service, the name we gave our outfit, pour in faster than we can build the cameras. Right now, though, our baby-photo equipment is doing a terrific business in 33 hospitals. And more are in the works.

“How do you get the picture of Junior with his eyes so wide open?” proud papas often ask as they admire the handsome candid portrait of their bright-eyed darlings.

The answer is, we snap them when they’re well rested after their naps just as feeding time approaches. On the day after birth, nurse wheels baby under the permanently installed cameras in the nursery. After rolling the crib into the proper position, she steps on a foot lever. P-s-s-t! the photo is made in one five-thousandth of a second-—before baby can even think about screwing up that pretty little face in a startled squint.

“Why do you have to wait till the second day before taking the pictures?” some of the eager parents want to know.

Well, that first day baby’s tired because he’s just done a man-sized day’s work by coming out into a strange, new world. But by this second day he’s gotten his strength and he’s at the peak of the pulchritude. Two-day-old babies are really beautiful—and a look through the picture files will convince even the most cynical bachelor.

Generally the hospital attaches a baby picture to the mother’s admittance card as a part of its permanent record. Not only are these clear, portrait photos an important aid in identification but also they allow specialists to make a more careful study of their tiny patients whenever a remedial operation becomes necessary.

We finish off a larger print for the parents, who, of course, don’t have to buy the picture unless they want it. But practically all of them do—and ask for reorders, too!

Every two days I or one of my associates go to the hospital to pick up the film. Before we enter the nursery to service the camera unit, we prepare ourselves like a doctor about to begin a major operation. Scrubbed, capped, gowned and masked, we comply with every antiseptic regulation in order to protect baby from possible exposure to germs.

We process films from the Washington area at our local office. Hospitals in other cities throughout the country are handled by franchise operators who have obtained, from our home offices at Box 29, Cambridge 39, Mass., contracts for specific territories and the use of our new specially manufactured “Hospix” camera. These franchise owners vary in their photo skill. Some are professionals; some are advanced amateurs. Still others are businessmen who contract with a wholesale finisher for the technical work.

Along with the equipment, we supply helpful information and the record and bookkeeping systems that we’ve found best through trial and error. We try to do everything we can to help our operators avoid the same mistakes we’ve already made.

Having franchise owners put up an advance rental on their machines eases the heavy outlay we must make in order to build the cameras.

As the news of our unique baby-photo service spreads, our mail gets bigger and bigger. Besides letters of appreciation from delighted parents whose children already have been photographed, I even get letters like this: Dear Mr. Clark: I am expecting a baby in March.’ I would like to go, if possible, to a hospital using your picture service. Will you kindly tell me which ones in this area have it?

We still have to disappoint a lot of these mothers-to-be—but the way our business keeps growing, we hope it won’t be long before we can shoot practically every newborn baby in America. •