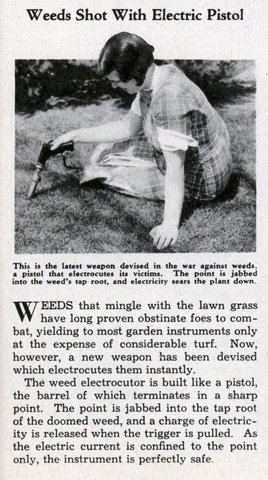 WEEDS that mingle with the lawn grass have long proven obstinate foes to combat, yielding to most garden instruments only at the expense of considerable turf. Now, however, a new weapon has been devised which electrocutes them instantly.

The weed electrocutor is built like a pistol, the barrel of which terminates in a sharp point. The point is jabbed into the tap root of the doomed weed, and a charge of electricity is released when the trigger is pulled. As the electric current is confined to the point only, the instrument is perfectly safe.