I’m not sure I get the analogy here. I mean I appreciate the message they are trying to get across. However it seems that if he really didn’t want to plow that acre he could just use ddt or something and kill all those dang weeds. Which I guess represent black people, or jews. Or does the soil represent a minority and the weeds represent um… bad minorities? That want to infect the pristine, weed free majority?!?

Well at least the message in the second part is clear: Speak out whenever you hear someone say they are not going to plow a field. And don’t spread rumors about dirt that is different than what you are used to. 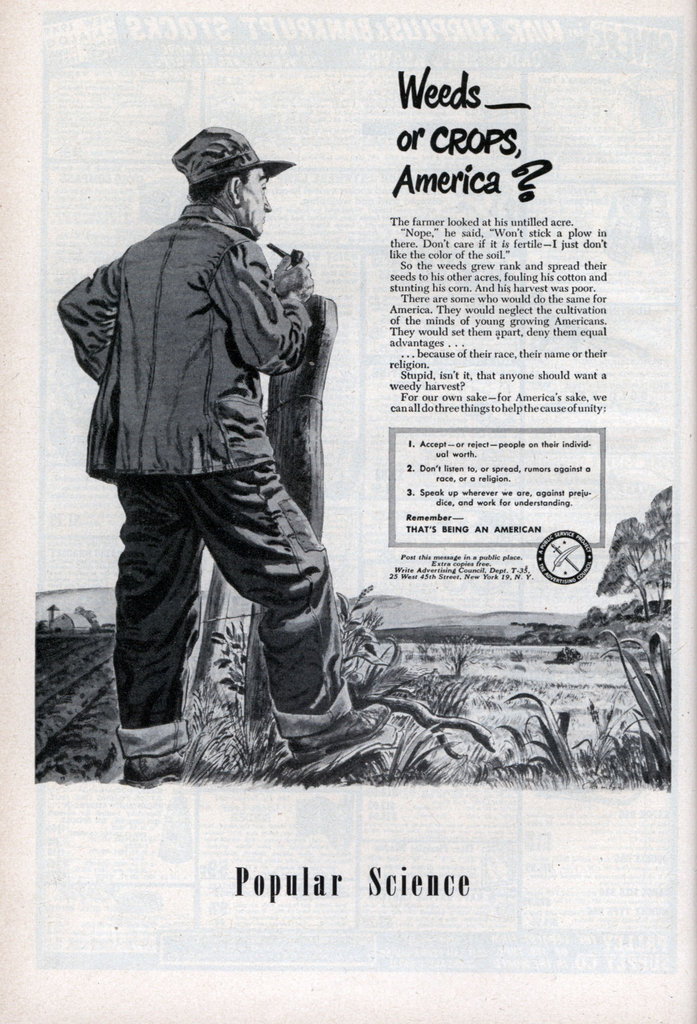 The farmer looked at his untilled acre.
“Nope,” he said, “Won’t stick a plow in there. Don’t care if it is fertileâ€”I just don’t like the color of the soil.”

So the weeds grew rank and spread their seeds to his other acres, fouling his cotton and stunting his corn. And his harvest was poor.
There are some who would do the same for America. They would neglect the cultivation of the minds of young growing Americans. They would set them apart, deny them equal advantages …

… because of their race, their name or their religion.

Stupid, isn’t it, that anyone should want a weedy harvest?

For our own sake â€”for America’s sake, we can all do three things to help the cause of unity:

1. Accept â€”or rejectâ€” people on their individual worth.
2. Don’t listen to, or spread, rumors against a race, or a religion.
3. Speak up wherever we are, against prejudice, and work for understanding.

Remember –
THAT’S BEING AN AMERICAN