The old issues of Popular Mechanics are organized rather badly. In this case there was a section called “Radio News” with two or three pages of articles and then this pictorial with no preface or explaination. The pictures are pretty great though so I hope you enjoy them. 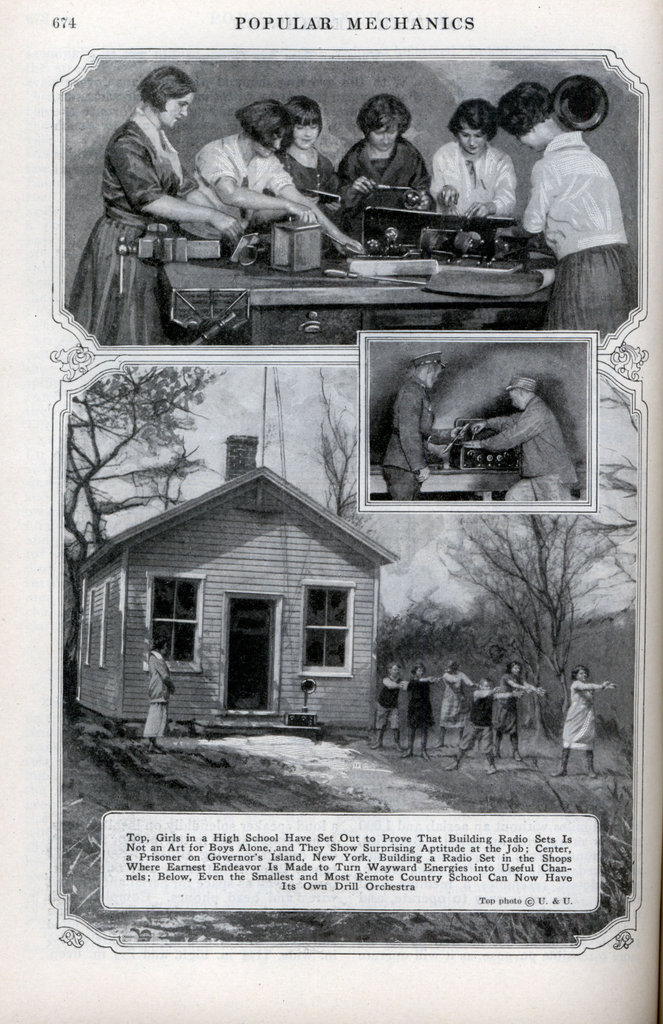 Top, Girls in a High School Have Set Out to Prove That Building Radio Sets Is Not an Art for Boys Alone, and They Show Surprising Aptitude at the Job; Center, a Prisoner on Governor’s Island, New York, Building a Radio Set in the Shops Where Earnest Endeavor Is Made to Turn Wayward Energies into Useful Channels; Below, Even the Smallest and Most Remote Country School Can Now Have Its Own Drill Orchestra

A New Type of Loud Speaker Entertains New York Fans Gathered on the Street Below. The Inventor Is Paul De Kilduchevsky

Major Andrew White, Famous Fight Announcer, Broadcasting the Gibbons-Carpentier Fight, Round by Round, from the Ringside at Michigan City; the Microphone Was Connected by Special Wire to KYW

At a Dinner on the “Leviathan,” Speeches and Entertainment Were Broadcast with Shin’s Set â€” the First Time This Has Been Done

Above, the Salvation Army Has Adopted a New Way of Supplying Music to Passers-By; Left, a Fashion Hint for Girl Fansâ€”a Miniature Ivory Loose Cou-pier on the Ring

Joseph-Takes-the-Shield and Mrs. Shield, Sioux from Standing Rock, and Black Owl, an Assini-boine from Montana, Whose War Whoops, Songs and Tom-Tom Music, Broadcast from WRC, Chilled and Thrilled the Radio Audience

Sir Walford Davis, English Composer, Lectures to Schools over the Radio; Note the Flexible Suspension of the Microphone. Right, Radio Set in a Coconut Shell

Delivering Set That Brought the Republican and Democratic National Conventions into the White House; the Diaphragm of the Hornless Loud Speaker Is Covered with Reed, and the Loop Aerial Is Attached Directly to the Cabinet

This Radio-Receiving Set Fits in a Telephone Receiver. The Tuning Element Is a Spider-Web Coil with Five Taps; the Builder Is J. A. Key of St. Louis

The “Columbus” Is the First Trans-atlantic Liner Whose Lifeboats Carry Radio – Transmitting and Receiving Sets of Long Range. The Photo Shows Officers Rigging the Antenna