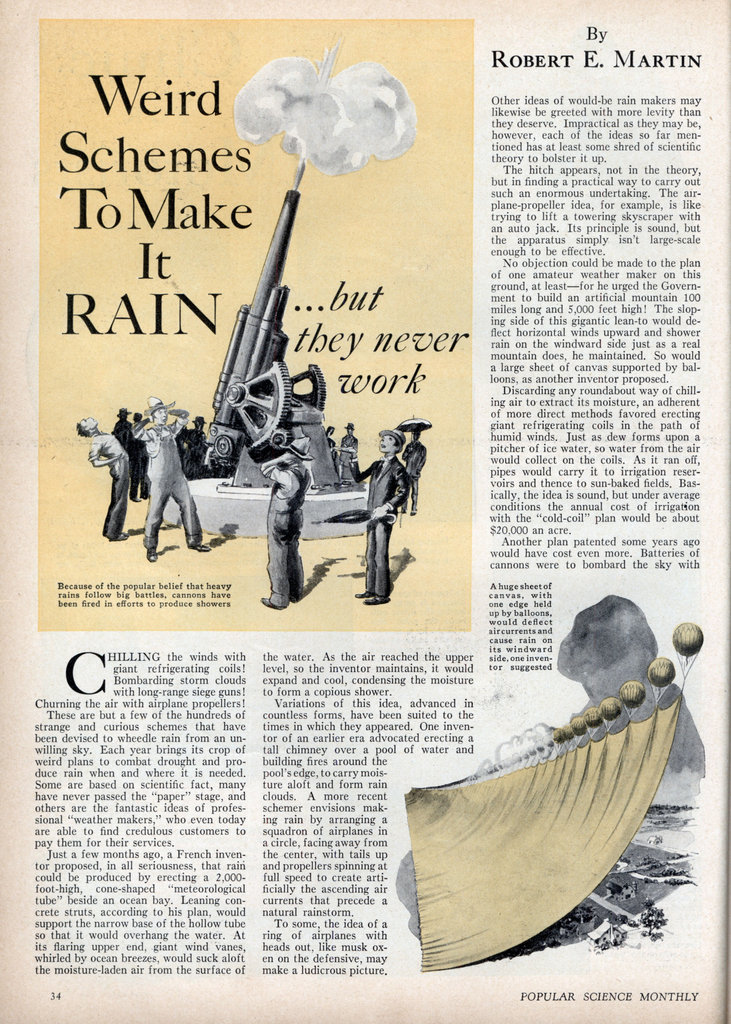 Weird Schemes To Make It RAIN …but they never work

CHILLING the winds with giant refrigerating coils! Bombarding storm clouds with long-range siege guns! Churning the air with airplane propellers! These are but a few of the hundreds of strange and curious schemes that have been devised to wheedle rain from an unwilling sky. Each year brings its crop of weird plans to combat drought and produce rain when and where it is needed. Some are based on scientific fact, many have never passed the “paper” stage, and others are the fantastic ideas of professional “weather makers,” who even today are able to find credulous customers to pay them for their services.

Just a few months ago, a French inventor proposed, in all seriousness, that rain could be produced by erecting a 2,000-foot-high, cone-shaped “meteorological tube” beside an ocean bay. Leaning concrete struts, according to his plan, would support the narrow base of the hollow tube so that it would overhang the water. At its flaring upper end, giant wind vanes, whirled by ocean breezes, would suck aloft the moisture-laden air from the surface of

Other ideas of would-be rain makers may likewise be greeted with more levity than they deserve. Impractical as they may be, however, each of the ideas so far mentioned has at least some shred of scientific theory to bolster it up.

The hitch appears, not in the theory, but in finding a practical way to carry out such an enormous undertaking. The airplane-propeller idea, for example, is like trying to lift a towering skyscraper with an auto jack. Its principle is sound, but the apparatus simply isn’t large-scale enough to be effective.

No objection could be made to the plan of one amateur weather maker on this ground, at leastâ€”for he urged the Government to build an artificial mountain 100 miles long and 5,000 feet high! The sloping side of this gigantic lean-to would deflect horizontal winds upward and shower rain on the windward side just as a real mountain does, he maintained. So would a large sheet of canvas supported by balloons, as another inventor proposed.

Discarding any roundabout way of chilling air to extract its moisture, an adherent of more direct methods favored erecting giant refrigerating coils in the path of humid winds. Just as dew forms upon a pitcher of ice water, so water from the air would collect on the coils. As it ran off, pipes would carry it to irrigation reservoirs and thence to sun-baked fields. Basically, the idea is sound, but under average conditions the annual cost of irrigation with the “cold-coil” plan would be about $20,000 an acre.

Another plan patented some years ago would have cost even more. Batteries of cannons were to bombard the sky with shells filled with carbon dioxide gas. Dynamite and time fuses would explode the shells at a predetermined height. The carbon dioxide, chilled as it expanded, would evaporate into a sheet of low-temperature vapor, cooling the surrounding air in turn and precipitating rain. A California scientist did a bit of figuring on this plan. Counting only the price of the gas itself, the cost of treating a single acre of land to a quarter inch of rainfall would be about $600,000.

Rain-making schemes of another brand approach the purely fantastic, even in theory. One inventor proposed to send aloft, successively, four fleets of balloons. The first, by exploding charges of gunpowder, would scatter particles of chlorate of potash through the air; the second, a spray of water; the third, nitrogen gas; and the fourth, steam. Rain would surely follow, he declared, within twenty-four hours. Just why he expected this happy outcome remains a mystery.

Another balloon enthusiast patented a gas bag covered with metal spurs, which were to be joined by a wire network surrounding the fabric. The wires led to a cable that tethered the “lightning-rod balloon” to the ground. When this extraordinary device was allowed to rise into an electrically charged cloud, its designer argued, the discharge of electricity to the ground through the cable would release raindrops from the cloud.

By far the greatest number of plans for producing rain have been based on the popular, and mistaken, belief that loud noises or heavy concussions will cause a downpour. Early proponents of the noise theory of rain erroneously believed that the concussion of thunder or artillery fire would jostle together the small droplets of moisture in a cloud, forming larger drops that would fall as rain. One of their leaders, Edward Powers, published in 1871 a book in which he assembled enough supporting evidence to wield tremendous popular influence. The following year, he petitioned Congress to finance an ambitious rain-making experiment, in which 300 cannon were to be taken to an arid section of the West and fired simultaneously.

Congress refused, but by 1891 public pressure became so great that it consented to authorize an elaborate test of the theory.

Odd, indeed, for a grizzled war dog, must have seemed the task assigned to Gen. Robert Dyrenforth, under whose direction the trial was actually carried out near Midland, Tex. Instead of hurling steel at an enemy, his cannon barked defiance at the sky. Shell after shell went screaming aloft. Balloons soared into the air, filled with an explosive mixture of hydrogen and oxygen, and exploded high above the ground as fuses touched them off. One went off squarely in the middle of a black rain cloudâ€”but, like the rest of the skyward volley, to no avail.

Did the Dyrenforth experiments settle the question once and for all, as anyone might have expected? Quite the contrary! As late as’ 1912, a group bombed storm clouds near Battle Creek, Mich., and cheered when rain shortly arrived. However, as a matter of record, it rained that day over an area extending from the Rocky Mountains to the Atlantic.

Quick to capitalize upon the national interest in rain making aroused by the Dyrenforth tests, a horde of professional “weather wizards” invaded the agricultural regions of the west. Approaching a farmer, one of these self-styled experts would contract to deliver a certain amount of rain within a specified time, for a sizable fee. He was to be paid, the “rain contract” usually stipulated, only in case he made good on his promise.

Thereupon, the “wizard” retired into a win-dowless shack from which wisps of smoke soon arose, showing that he was at work with his “secret chemicals.” Presently he emerged, announcing that he had done his work and rain might now be expected. If nature came to his aid by providing the desired shower, he pocketed his fee and went blithely on his way.

Naturally, a shrewd rain maker took care to consult weather maps and records, attempted his operations only in favorable weather, and never contracted to “produce” more rain than normally fell in a given locality. Thus he had an excellent chance of making good.

Should he fail, he had nothing to lose.

One of the most famed of all claimed to bring rain by evaporating “secret chemicals” in tanks mounted on thirty-five-foot towers. This man plied his trade for fifteen years over a territory from central Texas to Alaska. The secret of his success may be judged from his contract with an agricultural association in Medicine Hat, Alberta, Canada, to supply rain over a period of three months at a fee of $1,000 an inch. The official rain gauge at Medicine Hat recorded five inches of rain during that period. But weather records show that the normal average rainfall in that section for those three months is more than six inches!

A western railroad hired a man who was said to have broken innumerable dry spells in Australia, and gave him a special car which he fitted with chemicals, water tanks, exhaust pipes, and electric batteries. At intervals along the line, the “rain car” was deposited on a siding. Smoke curled from its exhaust pipes, and presently the “Australian rain wizard” emerged and assured the congregated farmers that, thanks to the generosity of the railroad, rain soon would fall upon their parched fields. Then the rain car was hauled away to another dry spot.

The railroad tour was reported to be “amazingly successful.” Follow the rainmaker’s route with U. S. Weather Bureau maps, however, and you discover that rain followed his mysterious activities only where the weather was unsettled and where the local Weather Bureau official had definitely predicted rain!

Preventing rain is as easy as producing it, if you would credit the glib sales talk of a professional weather maker. Officials of an Eastern race track, in 1930, actually engaged the services of one of these specialists. He was commissioned to set up his apparatus and attempt to prevent rain during the week of horse races, at a fee of $1,000 a day and $2,500 for Saturday. Fortunately for him, not a drop of rain fell the whole week. Following his apparent success, the expert was rehired for one day the next week. It poured.

Government weather experts supply the epilogue. So far as is known, they say, no man has ever succeeded in producing or preventing rain.

Attempts to control other kinds of weather have fared no betterâ€”though not for want of trying. One inventor would improve our national climate by placing a 3,000-mile string of coal stoves along the Canadian border, to keep blizzards away!

ANOTHER produced a more imaginative plan. Let a windbreak of fifty-foot evergreen trees be planted, he suggests, on parallel ridges running along our northern boundary. There might be 100 such “shelter ridges,” spaced about 500 feet apart. Now, suppose a layer of polar air, 5,000 feet deep, sweeps down from Canada. As it crosses the border, the first shelter ridge will clip off the lowest fifty feet of the cold air stream. Deprived of its underpinning, the remaining 4,950 feet will settle to earth and continue onward until it hits the second ridge, when another fifty feet will be amputated. Thus, the frigid blast will lose a fifty-foot slice at each ridge, until the final one annihilates the last trace of polar cold. Follow these directions, the sponsor of the plan maintains, and America will become a tropical paradise. Even if it were practical to carry out so vast an undertaking, however, skeptics may reserve their opinion as to whether the wind would fall into the trap so carefully laid for it.

The best that man can do, meteorologists insist, is to adapt himself to existing conditions. He can’t force rain to fall on parched fields, but he can build irrigation systems to water the soil. He can’t prevent the spring rains that cause floods, but he can plant trees to help the water soak into the ground, and build dams to stem the raging torrents.

Sound advice, no doubtâ€”but it’s safe to wager that inventors, with indomitable optimism, will go right on thinking up bigger and fancier schemes for controlling the weather!