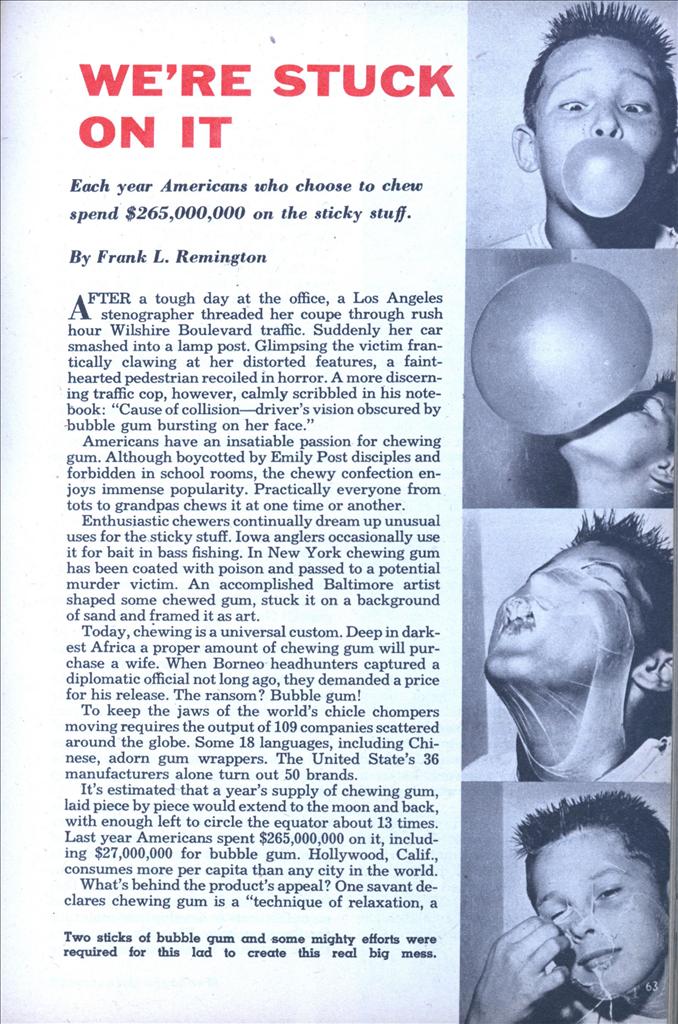 We’re Stuck on It

AFTER a tough day at the office, a Los Angeles stenographer threaded her coupe through rush hour Wilshire Boulevard traffic. Suddenly her car smashed into a lamp post. Glimpsing the victim frantically clawing at her distorted features, a fainthearted pedestrian recoiled in horror. A more discerning traffic cop, however, calmly scribbled in his notebook: “Cause of collision—driver’s vision obscured by -bubble gum bursting on her face.”

Americans have an insatiable passion for chewing gum. Although boycotted by Emily Post disciples and forbidden in school rooms, the chewy confection enjoys immense popularity. Practically everyone from tots to grandpas chews it at one time or another.

Enthusiastic chewers continually dream up unusual uses for the sticky stuff. Iowa anglers occasionally use it for bait in bass fishing. In New York chewing gum has been coated with poison and passed to a potential murder victim. An accomplished Baltimore artist shaped some chewed gum, stuck it on a background of sand and framed it as art.

Today, chewing is a universal custom. Deep in darkest Africa a proper amount of chewing gum will purchase a wife. When Borneo headhunters captured a diplomatic official not long ago, they demanded a price for his release. The ransom? Bubble gum!

To keep the jaws of the world’s chicle chompers moving requires the output of 109 companies scattered around the globe. Some 18 languages, including Chinese, adorn gum wrappers. The United State’s 36 manufacturers alone turn out 50 brands.

It’s estimated that a year’s supply of chewing gum, laid piece by piece would extend to the moon and back, with enough left to circle the equator about 13 times. Last year Americans spent $265,000,000 on it, including $27,000,000 for bubble gum. Hollywood, Calif., consumes more per capita than any city in the world.

What’s behind the product’s appeal? One savant declares chewing gum is a “technique of relaxation, a way of dissipating excess energy.” He puts pipe smoking, whistling, pencil-tapping and money-jangling in the same category. Though finicky executives may frown on a gumchewing stenographer, there’s actual proof that she can turn out more work than the girl who doesn’t pop a stick in her mouth.

Far-fetched as it seems, scientists have discovered that chewing stimulates active thinking. Consciously or not, the confirmed chewer really decreases his nervous tension and promotes concentration.

Gum chewing benefits teeth in a number of ways and helps stimulate the gums. Ocean liners stock it as an aid to avert seasickness. Airline hostesses pass gum to nervous passengers, for it helps to calm them and equalize pressure on their eardrums.

From the earliest times people have enjoyed chewing on gum-like or chewy substances. The Indians taught American colonists to chew gum-like resin from spruce trees. Spruce gum, made of unflavored pellets of this resin, delighted early 19th century chewers. Later, a chew made of paraffin wax replaced spruce gum.

Modern chewing gum first appeared in the 1860’s when Carlos Juan Santa Ana, the exiled Mexican general, arrived in New York with small quantities of chicle, which he fashioned into sweet sticks of gum. In 1869, a Mr. Semple, after experimenting with flavored chicle, took out a patent on chewing gum as we know it today.

Chicle comes from the milky juice (or latex) of the sapodilla tree, grown in tropical rain forests of Central and South America. Because of its springy chewing quality, and its ability to carry flavor, gum made with chicle and similar latex products soon won preference over the earlier types. With new processing, packaging and selling methods, modern chewing gum began its major rise in popularity in the early 1900’s.

Though many think of chewing gum as a children’s product, persons over 15-years old buy most of it. The tricycle tribe, however, with help from teenagers, blow enough wind into bubble gum each day to start a major hurricane.

The small fry’s penchant for bubble gum takes some unusual forms. Local chewers sometimes compete for blowing the biggest, the messiest, and the most geometrical bubbles. Junior’s preoccupation with bubble gum often brings unfortunate consequences, especially if the inflated mess of goo suddenly bursts over his face. And if the sticky remnants cling in his hair or stick to his new Sunday suit, he’s in a peck of trouble.

Discarded gum poses a major problem to theater managers, department store janitors, and custodians of railroad terminals, schools and other public buildings. Though gum wrappers generally carry the line: “Save Inner Wrapper To Dispose Of Gum,” most chewers apparently ignore it. And so thousands of dollars go into cleaning wads of it from beneath chairs, tables, benches and desks. . An Oak Park, 111., boys’ club recently brought out an innovation that partially solves one phase of the chewing gum problem—a checkerboard “parking lot” hung on the wall where each chomper has a labeled space for his wad. A kid can park his chew temporarily and pick it up again when his jaws are rested.

Despite stories that chewing gum is made of horses’ hoofs, discarded inner tire tubes, and even once-used wads’of gum, the label of most any brand lists five main ingredients: gum base, sugar, corn syrup, softeners and flavoring. Difficulty in controlling chicle supply forced manufacturers to develop new materials for the gum base. Recently many synthetic materials have been used to make better and more uniform chewing gums.

At the factory, raw gums go into large cooking kettles equipped with steam jackets and large powerful mixing arms. Heat and mechanical treatment softens the gums and mixes them thoroughly. After a few hours, the melted and sticky mess is filtered from the kettle to remove sand, pieces of bark and other impurities.

While still hot, the filtered gum goes into another kettle. Finely pulverized sugar and corn syrup are mixed in. Color is also added as well as aromatic flavoring essences, such as peppermint, spearmint, cinnamon and clove. Now the chewing gum is ready for rolling and scoring. Ingenious machines receive huge dough-like masses, reduce them to thin sheets by successive batteries of rollers, and finally mark the sheets off into the dimensions of the chewing gum stick. – Bubble gum is made the same way and from similar materials. The only difference is the firmness and elasticity of the base. This is made firmer so that it will form a strong film when air is blown into it to form a bubble.

Chewing gum is among the few commodities that have tripled in consumption in the past 25 years. World War II helped spread the habit. GI’s chewed their way around the world to the annual tune of 630 sticks a man—seven billion sticks a year. Jungle fighters and high altitude fliers found it indispensable as concentrated energy in a form that wouldn’t melt or freeze, as a nerve steadier and as a thirst quencher.

Gum-chewing figured in dramatic wartime roles, too. Returning from a bombing mission, an American pilot discovered a flak hole in his B-26’s hydraulic landing gear. But he brought the plane in safely by plugging the hole —with chewing gum, naturally.

Chewing on something is a normal, natural pleasure. It is a kind of enjoyment that people don’t think about very much; they just like to get their teeth into something chewy. So the ranks of the jaw chompers fraternity continues to swell. At this point in its history one thing about chewing gum seems certain: we’re stuck on it!