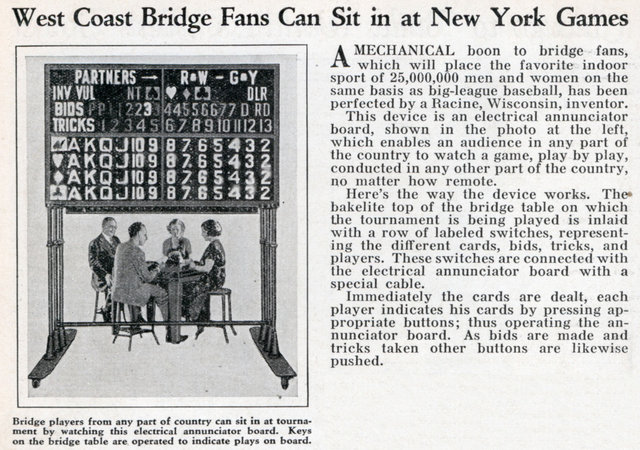 A MECHANICAL boon to bridge fans, which will place the favorite indoor sport of 25,000,000 men and women on the same basis as big-league baseball, has been perfected by a Racine, Wisconsin, inventor.

This device is an electrical annunciator board, shown in the photo at the left, which enables an audience in any part of the country to watch a game, play by play, conducted in any other part of the country, no matter how remote.

Here’s the way the device works. The bakelite top of the bridge table on which the tournament is being played is inlaid with a row of labeled switches, representing the different cards, bids, tricks, and players. These switches are connected with the electrical annunciator board with a special cable.

Immediately the cards are dealt, each player indicates his cards by pressing appropriate buttons; thus operating the annunciator board. As bids are made and tricks taken other buttons are likewise pushed.