Top Secret
Issue: Feb, 1958
Posted in: Sexuality
7 Comments on What Are Those Nurses Doing in Mexico’s Bawdy Houses? (Feb, 1958)

What Are Those Nurses Doing in Mexico’s Bawdy Houses? (Feb, 1958) 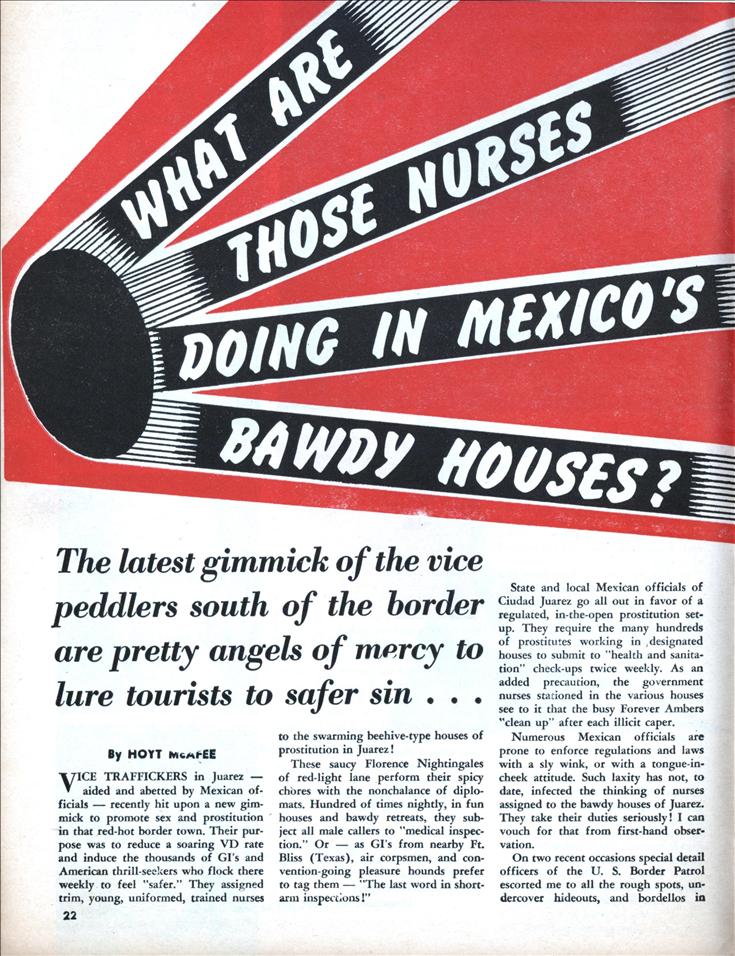 What Are Those Nurses Doing in Mexico’s Bawdy Houses?

The latest gimmick of the vice peddlers south of the border are pretty angels of mercy to lure tourists to safer sin . . .

VICE TRAFFICKERS in Juarez — aided and abetted by Mexican officials — recently hit upon a new gimmick to promote sex and prostitution in that red-hot border town. Their purpose was to reduce a soaring VD rate and induce the thousands of GI’s and American thrill-seekers who flock there weekly to feel “safer.” They assigned trim, young, uniformed, trained nurses to the swarming beehive-type houses of prostitution in Juarez!

These saucy Florence Nightingales of red-light lane perform their spicy chores with the nonchalance of diplomats. Hundred of times nightly, in fun houses and bawdy retreats, they subject all male callers to “medical inspection.” Or — as GI’s from nearby Ft. Bliss (Texas), air corpsmen, and convention-going pleasure hounds prefer to tag them — “The last word in short-arm inspections!”

State and local Mexican officials of Ciudad Juarez go all out in favor of a regulated, in-the-open prostitution setup. They require the many hundreds of prostitutes working in , designated houses to submit to “health and sanitation” check-ups twice weekly. As an added precaution, the government nurses stationed in the various houses see to it that the busy Forever Ambers “clean up” after each illicit caper.

Numerous Mexican officials are prone to enforce regulations and laws with a sly wink, or with a tongue-in-cheek attitude. Such laxity has not, to date, infected the thinking of nurses assigned to the bawdy houses of Juarez. They take their duties seriously! I can vouch for that from first-hand observation.

On two recent occasions special detail officers of the U. S. Border Patrol escorted me to all the rough spots, undercover hideouts, and bordellos in Juarez. Everywhere there was unabashed surrender to all of the weaknesses of the flesh — to animal lust.

Young shoeshine boys trumpeted the sex charms of their teen-age sisters. Taxi drivers importuned you to go have some “fun” with their wives! Shameless mothers leaned out of windows and doorways and solicited “business” for their daughters! And offbeat, non-regulated trollops beckoned to you with winks, hip wiggling, and other come-on bait.

If any reader considers my eye-witness account of conditions in Juarez exaggerated, I can substantiate it by citing three authoritative sources. First, a U. S. Senate subcommittee on juvenile delinquency, headed up by Senator Tom Hennings of Missouri. After long and thorough probing, the Hennings subcommittee issued this blistering indict- ment of Juarez: “Its vice conditions beggar description to the average person in the United States. Within its limits flourish prostitution, drunkenness, sale of narcotics and pornography, perversion, and all forms of base pleasures.

“Substantial numbers of juveniles between 13 and 18 years of age go unescorted into this Mexican border town — all of them seeking thrills, new types of recreation, and excitement. El Paso (Texas) and Juarez (Mexico) are joined by a foot bridge and thousands of persons cross and recross it daily — at will. Some of the houses of prostitution (in Juarez) have up to 50 prostitutes on the premises at all times!”

Second, the Social Hygiene Association’s devastating report on vice trafficking in Juarez. These probers made an exhaustive inquiry, then swung hard in the following words: “Juarez — on it we bestow our worst label: very bad! There are no restraints, no codes of decency in evidence, in the flesh-pot areas. Young American servicemen are subjected to cheap thrills, the baser temptations; and the places of wickedness are so numerous that a blind person would be bound to stumble upon at least one of them.

“Juarez’s VD rate is alarming. We urge all American officials in the area to insist upon a thorough house cleaning in Juarez. Otherwise, place it off limits to members of the armed forces.”

And, third, the light in which U. S. Customs and Immigration Agents view the super sexmarket in Juarez. From long experience and a keen awareness of facts, they rate Juarez as the Mexican border town “most dedicated to prostitution and other pleasures of the flesh.”

One seasoned U. S. Customs Agent recounted his informal conversations with thousands of male visitors to Juarez. “Maybe a hundred of them,” he told me, “were going shopping or night clubbing with their wives or girl friends. All the others, to be honest about it, were headed for a quick, cheap sex spree in Juarez.”

He went on: “I’ve seen numbers come back with knife wounds, battered and bloody heads, and no wallets. They’d protest loud and long to us about how badly they were treated in Juarez. Two nights later they’d come back for another helping of the same kind of punishment.”

As for the new “gimmick” nurses in Juarez bordellos, a U. S. Border Patrolman offers this comment: “So long as there’s wide-open prostitution, their presence won’t do any harm. It might even do some good in curbing venereal infection.”

In that connection, I — accompanied by two below-the-border agents — watched seven nurses in Juarez houses of ill fame greet streams of men customers. This invariably took place on first-floor or second-floor reception rooms. These later were equipped with bars, sofas, and lurid lights.

A male caller would look over the assemblage of scantily-clad “hostesses” — prostitutes to you. He’d single out his favorite, she’d plop on his lap, and the two of them would reach an agreement on the price — ranging from $5 to $10 in most instances. Then the government nurse would take over.

She’d steer the eager sport to a private room and put him through the paces of a medical examination — sexually speaking. Each nurse, I observed, went about that stint in routine, matter-of-fact fashion. But the male recipients of that delicate feminine attention: Not one of them seemed able to relax. They’d fidget, squirm, blush, bluster, end even try to bribe the nurses to skip them.

Astonishingly enough, the rough-and-tumble men seeking fleshy pleasures never made passes at the pretty, straight-faced nurses. It seemed to me that the most flippant man was rendered speechless, for the nonce, by the very presence of the Florence Nightingales.

My U. S. Border Patrolmen friends urged me to pay special heed to another point. It was the forthrightness of bordello nurses in saying to infected men: “You can’t date our girls!” Those so rejected would slink or storm out of the bagnio and off to a crummy bar on down a darkened sidestreet in search of free-lance, non-regulated “joy girls.”

One of the nurses spoke frankly about her assignment. For convenience, I shall call her Carol. She had, she explained, once worked as a nurse in a Mexico City hospital. Later, she followed an army officer boy friend to the Juarez area. He and she quarreled and broke off their romance. Soon afterward Carol accepted the offer of a nursing job in a regulated Juarez house.

She accepted it with misgivings but in time came to regard it as a “routine job.” I questioned her about the behavior of the hundreds of men she’s examined to determine whether they were free of venereal infection.

She said that only two men — both of them drunk — had ever insulted her. Carol put one in his place with a kick in the shins and subdued the other with a smart cuffing about the head!

As she related these two disagreeable incidents to me, Carol’s brown eyes flashed with anger and she clenched her fists. In short, she convinced me of her ability to take care of herself in the roughest of spots. And she demonstrated a knack for winning the respect of the most abandoned male “fun hunter.”

I asked her if any male callers ever invited her to a respectable dance-and-dinner date, in her off-duty hours. She replied “yes” — nine or ten of them nightly, on the average. Almost scornfully she made it clear that she always turned down such invitations. “Senor,” she said, “my love is not for sale — to anyone! I’m a trained nurse. No one should judge me by the place where I work.” (She hammered all that home in clear, flawless English.) Two hours later Carol — then off work for the night — joined me for lunch in a Juarez cafe. She agreed to the meeting only after I convinced her I was an Adventure Reporter and that I had visited the bordello for close-up, first-hand information.

Carol confided that only one Juarez nurse, of the several she knew well, was betraying her profession — that is, by prostituting her body on the side.

In response to Carol’s tip, I accompanied two trusted Mexican friends to the most fabulous “joy retreat” in Juarez — the spot in which the “renegade nurse” was betraying her training and profession. It was located on the outskirts of Juarez, headed into the interior of Mexico. No one crashes that place without a special invitation.

Men of limited financial means are not welcome. Nor are casual and footloose fun seekers. Even the most money-hungry taxi drivers along Juarez’s main drag won’t steer or haul you to this particular “girlie-and-whoopee” hideaway.

And the intriguing reason for that? It caters only to a hot-shot clientele — top-ranking matadors (toreros) and politicians from Mexico City, big names and lesser lights from Hollywood (in Juarez on an all-night or week-end visit), and assorted well-heeled Good-Time Charlies. It represents the “most,” in high-toned bordello entertainment.

Right away, in the main reception room, I spotted three familiar faces — two leading men from Hollywood and a prominent bullfighter. Fortunately, they didn’t know me from Adam; and my arrival caused them no disquiet.

Immediately the big-bosomed, gaudily-attired madam came over, grinning, and bade us welcome to her “fun in privacy” abode. Assuming that I must be trustworthy, since I had come there with the police official, she introduced me around to her girls. And, forthwith, I observed that there was about them an UN flavor. Some Portuguese, a few Spanish, two Puerto Ricans, one Chinese, two from “gay Paree,” one Italian, and one blonde Swedish gal.

They struck me as being more attractive, more composed, and more artful than the prostitutes in the “uptown houses.” They resorted to no high pressure, no cajolery, no trickery to make a caller select them for a date. One of them, the Swedish girl, explained to me during one of her “quiet periods” that: “We know why men come here to see us. If I look good to them, they’ll ask me to be with them — in their own way and time. We don’t put on the rush act here. I’ve found that if one fellow passes me up, the next one may go for me strong — and tip me plenty to boot.”

It was a few moments later that I met the aforementioned “renegade nurse” — the one Carol had told me about. She was, I quickly noted, truly “doubling up” in her duties. True to what was expected and required of her, she performed her “inspection chores.” Then, when some male patron indicated a wish to be with her personally, she’d hurry to a private room and accommodate him.

Other straight-shooting, legitimate nurses in Juarez bawdy houses have protested against her “two-timing” activities. They consider her a disgrace to their profession.

So far, however, their complaints have fallen on deaf ears. You probably can surmise the reason for that. The “renegade nurse” not only is pretty and very popular, but she works in the hideaway where kingpin Mexican officials seek their “fun in privacy!”