Mechanix Illustrated
Issue: May, 1950
Posted in: Radio
Tags: CB Radio, FCC
6 Comments on What Happened to the Citizens Radio Band? (May, 1950) 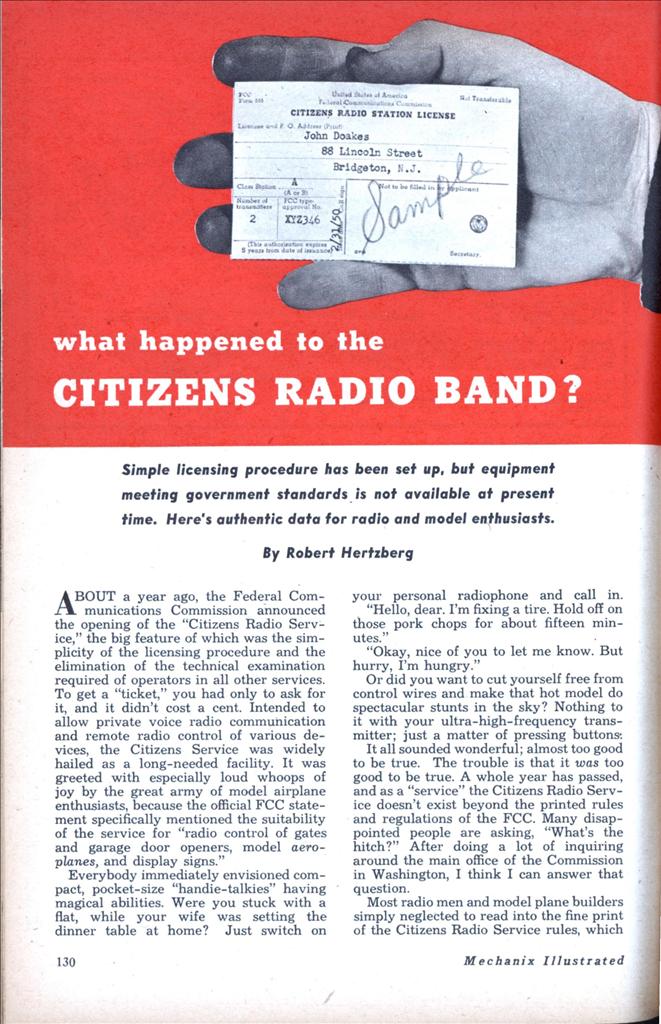 What Happened to the Citizens Radio Band?

Simple licensing procedure has been set up, but equipment meeting government standards is not available at present time. Here’s authentic data for radio and model enthusiasts.

ABOUT a year ago, the Federal Communications Commission announced the opening of the “Citizens Radio Service,” the big feature of which was the simplicity of the licensing procedure and the elimination of the technical examination required of operators in all other services. To get a “ticket,” you had only to ask for it, and it didn’t cost a cent. Intended to allow private voice radio communication and remote radio control of various devices, the Citizens Service was widely hailed as a long-needed facility. It was greeted with especially loud whoops of joy by the great army of model airplane enthusiasts, because the official FCC statement specifically mentioned the suitability of the service for “radio control of gates and garage door openers, model aeroplanes, and display signs.”

Everybody immediately envisioned compact, pocket-size “handie-talkies” having magical abilities. Were you stuck with a flat, while your wife was setting the dinner table at home? Just switch on your personal radiophone and call in.

“Hello, dear. I’m fixing a tire. Hold off on those pork chops for about fifteen minutes.”

Or did you want to cut yourself free from control wires and make that hot model do spectacular stunts in the sky? Nothing to it with your ultra-high-frequency transmitter; just a matter of pressing buttons: It all sounded wonderful; almost too good to be true. The trouble is that it was too good to be true. A whole year has passed, and as a “service” the Citizens Radio Service doesn’t exist beyond the printed rules and regulations of the FCC. Many disappointed people are asking, “What’s the hitch?” After doing a lot of inquiring around the main office of the Commission in Washington, I think I can answer that question.

Most radio men and model plane builders simply neglected to read into the fine print of the Citizens Radio Service rules, which stand today exactly as they were last June. If they’ll study them closely*, they’ll learn that while the licensing has been made very easy, the technical requirements of the actual equipment have been made very tough. So tough, in fact, that no equipment meeting them can be purchased on the open market, and none appears to be in sight at least until the end of the year.

The stumbling block is the insistence of the FCC (and rightly so) on good stability in the transmitter. The Citizens Service has been allocated to a frequency band between 460 and 470 megacycles. This range was widely used for radar during the war and its characteristics in this application are fairly well-known. However, voice and control signals are quite different from radar signals. So far, development engineers have found it very difficult to prevent the transmitters from spilling over into adjacent frequency bands, where they can cause serious interference to other important services. It is not generally realized, for instance, that a band starting at 475 megacycles was recently assigned to television, and this is where color television unquestionably will go in the not distant future. If personal radio conversations and model plane impulses ever break up TV programs, there’ll be anguished wailing on the part of the TV public.

The FCC rules allow Citizens Service stations to wander only .4% up or down from 465 megacycles if they are of low power; the tolerance is only .02% for slightly higher power stations that operate anywhere in the 460-470 megacycle band. This is roughly approximate to road traffic regulations which might state that two-wheeled vehicles must maintain a constant speed of 34.67 miles per hour between cities and must not move more than one half inch from a white painted line four inches wide, on the inside lane against the shoulder of the road. Conceivably, such driving might be possible with a gyro control of some sort and with a photo-electric eye to follow the white line, but the vehicle doesn’t exist just now.

The Citizens Service positively is NOT for experimenting. It is reserved strictly for person-to-person voice communication, for mechanical control of machines and certain other special purposes. The presumption is that the only users of the service will be non-technical people, whose only interest is pushing a button and getting results. The owner of the equipment isn’t permitted to do any testing during initial installation or subsequent servicing. This work must be done only by the holder of a commercial grade radio operator license. It will surprise many radio amateurs to learn that they don’t qualify in this respect, even though they have built complicated transmitters and receivers of their own and are highly competent technicians.

If you have gotten the impression from the foregoing that the FCC is throwing obstacles in the path of the Citizens Radio Service, you are mistaken. The air is crowded, and the Commission, in laying down the rules for this service, is merely trying to keep the crowding from getting worse. Actually, the FCC is lending all possible assistance, both official and unofficial, to would-be manufacturers of equipment, and it tests samples in its own laboratories free of charge. So far, the product of only one firm has been given what is called “type approval,” which means that the Commission is satisfied that the set meets its technical requirements. This firm’s name will not be mentioned here because it is NOT in production and doesn’t expect to be for some time.

“All right, so we can’t buy approved equipment,” you say. “Why can’t we make our own?”

There’s nothing to prevent you from trying, but unless you own a well-equipped laboratory of advanced nature, and can control temperature from 0 degrees to 125 degrees Fahrenheit for heat tests and humidity from 20% to 95% for moisture tests, you’re just wasting your time. Many competent experimenters have tried it, but have not come within a mile of conforming to the rigid FCC specifications. A couple of FCC engineers who are ardent model airplane fans on the side have been spending every moment of their own spare time on transmitters and receivers, but are now ready to admit that conventional radio methods and techniques just aren’t the thing for the ultra-high frequency involved. A new approach is needed, and the services of experienced radar specialists. Personally, I think the Citizens Service will burst through with a bang just as soon as some of the big television manufacturers start attacking the problems of transmission and reception on the new 475-megacycle TV channel. Any new techniques developed for 475-megacycle television will he easily adaptable to 470-mega-cycle voice and control-signal transmission.

The confusion over the Citizens Service has been unduly aggravated by misleading advertising of certain war-surplus high-frequency transmitter-receiver units intended originally for airborne radar purposes. The unit that bore the Army Air Force type number “BC-645” is particularly suspect. “Easily converted for use on the new Citizens Radio Service,” reads some of the ad copy. Because both the prices and the outward appearance of the BC-645 were attractive, many anxious radio and model plane boys bought it and then learned to their expense and sorrow that it didn’t fill the bill. So great a headache has this business become to all concerned that the FCC has put out a formal statement reminding prospective licensees of the stability requirements. To quote the FCC: “For example, war surplus equipment such as the BC-645 . . . does not possess in its original form sufficiently stable circuits to permit licensing in the Citizens Radio Service. Extensive modification, in some cases amounting to almost complete redesign of the original equipment, appears to be necessary to meet the standards of the Citizens Radio Service rules and will be required before the Commission will consider authorizing the use of the majority of war-surplus apparatus in the Citizens Radio Service.”

Where does all this leave us? At the present time, precisely nowhere. You can apply for a “Citizens Radio Station License,” but this is an empty gesture because you have to specify the FCC approval number for the equipment, and equipment with FCC approval isn’t obtainable. If you indicate “home-made equipment,” the burden of proving that it meets the stability requirements is yours, and brother, you’ll have to do some tall proving. And you might unwittingly fall into a trap of your own making if you say that you tried the stuff and it works fine. How could you try it in advance of getting the license? You could if you had an experimental license, but if you can qualify for that you can sail through the amateur license test in a breeze and you wouldn’t be bothering with the Citizens Band in the first place.* Equipment approved by the FCC will be coming along. It probably will be simpler and more compact even than, the idealized “mock-ups” shown in the accompanying photographs. Meanwhile, resist all advertising that doesn’t clearly, definitely and positively include the FCC type-approval number for any apparatus labeled “Citizens Radio Service.” •