Scientific American
Issue: May, 1980
Posted in: Advertisements, Computers
Tags: Hewlett Packard, pascal, programming languages
2 Comments on What if you choose HP products to enhance your productivity? (May, 1980)

What if you choose HP products to enhance your productivity? (May, 1980)

Also, while reading in software via a giant spool of bar code is pretty weird, it is not the crazy method I teased earlier. That’s coming next week. 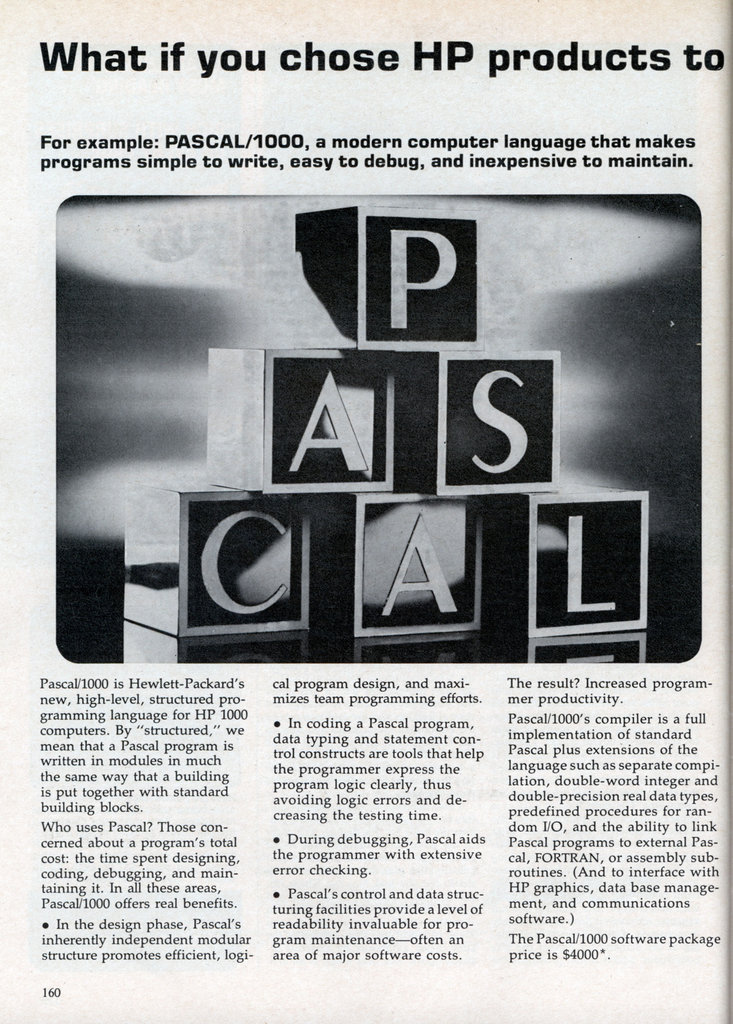 What if you choose HP products to enhance your productivity?

For example: PASCAL/1000, a modern computer language that makes programs simple to write, easy to debug, and inexpensive to maintain.

Pascal/1000 is Hewlett-Packard’s new, high-level, structured programming language for HP 1000 computers. By “structured,” we mean that a Pascal program is written in modules in much the same way that a building is put together with standard building blocks.

Who uses Pascal? Those concerned about a program’s total cost: the time spent designing, coding, debugging, and maintaining it. In all these areas, Pascal/1000 offers real benefits.

• During debugging, Pascal aids the programmer with extensive error checking.

Pascal/1000’s compiler is a full implementation of standard Pascal plus extensions of the language such as separate compilation, double-word integer and double-precision real data types, predefined procedures for random I/O, and the ability to link Pascal programs to external Pascal, FORTRAN, or assembly subroutines. (And to interface with HP graphics, data base management, and communications software.) The Pascal/1000 software package price is $4000*.

For example: HP’s new digital wand. It reads bar codes and transforms them into data a microprocessor can understand.

Anyone using a keyboard or pushbuttons for data entry could benefit from using bar codes. Bar code scanning is two to four times faster than key entry, and because it eliminates keying errors and contains built-in checksums to prevent misreadings, it is more accurate as well.

HP’s new HEDS-3000 digital bar code wand compounds the advantages of bar code data entry with its speed, reliability, low cost, and ease of use. Contained in its 5.2-inch (13.3-cm) length is all the circuitry needed to scan bar code and convert it to microprocessor-compatible digital output. The heart of the wand is a precision optical sensor. Signal-conditioning circuitry—an analog amplifier, a digitizing circuit, and an output transistor—provide TTL- and CMOS-compatible logic-level output.

As part of a portable data entry system, the wand can be used to read shelf tags for inventory control and order entry. Another interesting and very practical use for the wand is an input device for computers and programmable calculators. It can read programs and data printed in bar code form, and load them into the computer in a matter of seconds. (HP is making its own use of this faculty: the wand will soon be available as an input device for the HP-41C fully programmable hand-held calculator.) Not magic but close to it, the HEDS-3000 wand has a unit price of $99.50* in quantities up to 99.

These are only two of many thousand product reasons for choosing HP.