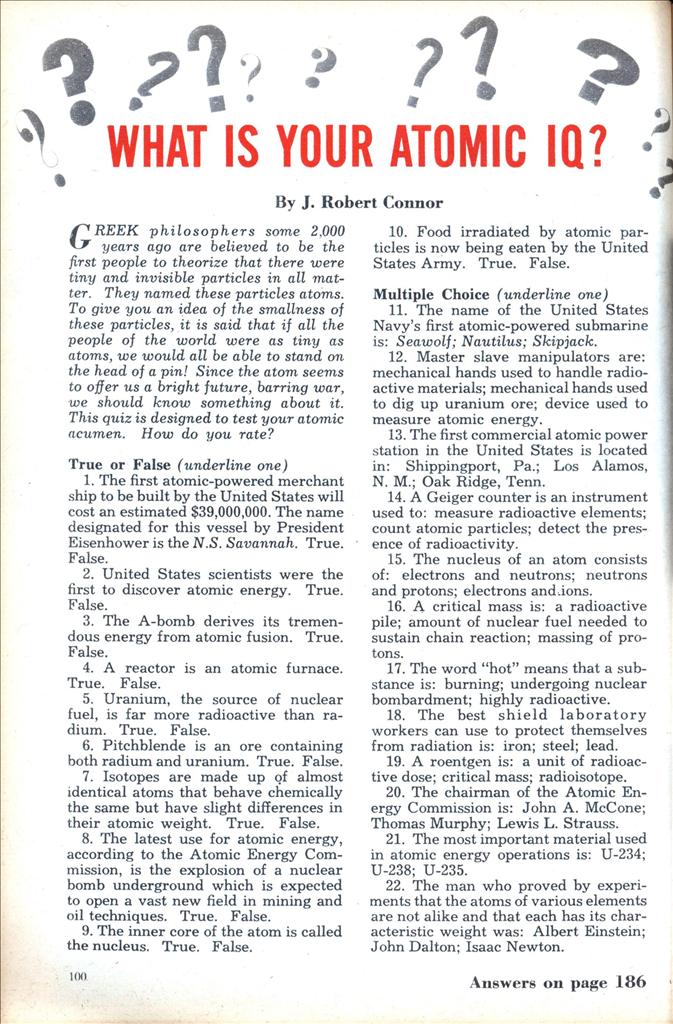 WHAT IS YOUR ATOMIC IQ?

GREEK philosophers some 2,000 years ago are believed to be the first people to theorize that there were tiny and invisible particles in all matter. They named these particles atoms. To give you an idea of the smallness of these particles, it is said that if all the people of the world were as tiny as atoms, we would all be able to stand on the head of a pin! Since the atom seems to offer us a bright future, barring war, we should know something about it. This quiz is designed to test your atomic acumen. How do you rate?

True or False (underline one)
1. The first atomic-powered merchant ship to be built by the United States will cost an estimated $39,000,000. The name designated for this vessel by President Eisenhower is the N.S. Savannah. True. False.

4. A reactor is an atomic furnace. True. False.

6. Pitchblende is an ore containing both radium and uranium. True. False.

7. Isotopes are made up of almost identical atoms that behave chemically the same but have slight differences in their atomic weight. True. False.

8. The latest use for atomic energy, according to the Atomic Energy Commission, is the explosion of a nuclear bomb underground which is expected to open a vast new field in mining and oil techniques. True. False.

9. The inner core of the atom is called the nucleus. True. False.

10. Food irradiated by atomic particles is now being eaten by the United States Army. True. False.

14. A Geiger counter is an instrument used to: measure radioactive elements; count atomic particles; detect the presence of radioactivity.

16. A critical mass is: a radioactive pile; amount of nuclear fuel needed to sustain chain reaction; massing of protons.

18. The best shield laboratory workers can use to protect themselves from radiation is: iron; steel; lead.

19. A roentgen is: a unit of radioactive dose; critical mass; radioisotope.

20. The chairman of the Atomic Energy Commission is: John A. McCone; Thomas Murphy; Lewis L. Strauss.

22. The man who proved by experiments that the atoms of various elements are not alike and that each has its characteristic weight was: Albert Einstein; John Dalton; Isaac Newton.

1. True. The first steamship to cross the Atlantic was the S.S. Savannah in 1819. The first atomic-powered merchant ship will be named after it and called the N.S. (Nuclear Ship) Savannah.

3. False. Atomic fission, the splitting of heavy nuclei such as uranium, releases the energy that explodes the atomic bomb.

4. True. An atomic furnace is called a reactor and is designed to withstand the tremendous amount of energy produced by the splitting of atoms.

8. True. Recently the AEC set off an atomic explosion deep in a Nevada mesa. The AEC believes that this new method will lead to obtaining minerals and oil from the ground much more easily and cheaply than is now possible.

10. False. Research in this field has been going on for quite some time and the armed forces plan to test irradiated foods in the near future.

14. A device used to detect the presence of radioactivity.

15. The inner core of the atom consists of neutrons and protons locked together.

16. The amount of nuclear fuel necessary to sustain a chain reaction.

19. A roentgen is a unit of radioactive dose, or exposure.

21. U-235. Scientists have discovered that U-235, a rare isotope of uranium, is the atom that is most easily split.

22. John Dalton, a Quaker school teacher who lived in the 18th Century.

Give yourself five points for each correct answer. Here’s how to interpret your score: Zero to 30—you’re an atomic dud; 35 to 55—you can distinguish uranium ore from a hunk of coal; 60 to 80—you’re on your way to atomic science degree; 85 to 110—you’re cooking with atoms!