Popular Mechanics
Issue: May, 1924
Posted in: Automotive
No Comments on What to Expect in the Car of the Future (May, 1924) 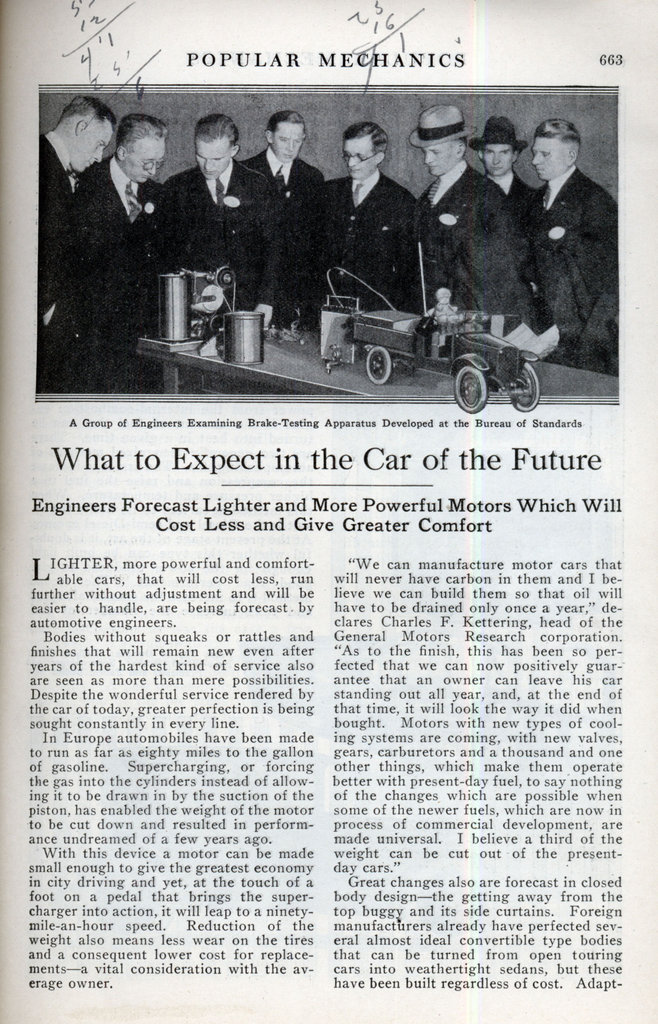 What to Expect in the Car of the Future

LIGHTER, more powerful and comfortable cars, that will cost less, run further without adjustment and will be easier to handle, are being forecast, by automotive engineers.

Bodies without squeaks or rattles and finishes that will remain new even after years of the hardest kind of service also are seen as more than mere possibilities. Despite the wonderful service rendered by the car of today, greater perfection is being sought constantly in every line.

In Europe automobiles have been made to run as far as eighty miles to the gallon of gasoline. Supercharging, or forcing the gas into the cylinders instead of allowing it to be drawn in by the suction of the piston, has enabled the weight of the motor to be cut down and resulted in performance undreamed of a few years ago.

With this device a motor can be made small enough to give the greatest economy in city driving and yet, at the touch of a foot on a pedal that brings the supercharger into action, it will leap to a ninety-mile-an-hour speed. Reduction of the weight also means less wear on the tires and a consequent lower cost for replacementsâ€”a vital consideration with the average owner.

“We can manufacture motor cars that will never have carbon in them and I believe we can build them so that oil will have to be drained only once a year,” declares Charles F. Kettering, head of the General Motors Research corporation. “As to the finish, this has been so perfected that we can now positively guarantee that an owner can leave his car standing out all year, and, at the end of that time, it will look the way it did when bought. Motors with new types of cooling systems are coming, with new valves, gears, carburetors and a thousand and one other things, which make them operate better with present-day fuel, to say nothing of the changes which are possible when some of the newer fuels, which are now in process of commercial development, are made universal. I believe a third of the weight can be cut out of the present-day cars.”

Great changes also are forecast in closed body designâ€”the getting away from the top buggy and its side curtains. Foreign manufacturers already have perfected several almost ideal convertible type bodies that can be turned from open touring cars into weathertight sedans, but these have been built regardless of cost. Adapting these styles to quick-production methods has been started by American manufacturers, who also are turning to bodies made of fabric to eliminate squeaks and rattles.

The power to weight ratio of the average car now is in the neighborhood of one to fifty. In other words, a sixty-horsepower engine represents the average power plant for a car of 3,000 pounds gross weight. But the famous 122-inch racing cars of 1923 weigh only a little over fifteen pounds per horsepower, and this ratio may be equaled and even lowered in the stock car of a few years hence. Ten years ago it was not uncommon to build engines of 700 cubic inches displacement. Nowadays the engine of 400 inches is considered a very large one and the average for all 1923 passenger-car engines was just slightly over 240 cubic inches.

The limiting factor in the production of power from the internal-combustion engine is the amount of fuel that can be turned into heat in a given time. There are two generally recognized methods of accomplishing this. The first is to increase the compression and raise the fuel to a higher pressure and temperature. When this method is carried to its limits the result is the Diesel and semi-Diesel engines. At the present stage of the art, it is doubtful whether this type can be built light enough for the power produced to give good road performance. The second method is to increase the crankshaft speed and thus increase the number of fuel sucking strokes per minute. For any size cylinder at any given speed, the power output will increase directly as the pressure on the piston is increased. To get this high pressure it is necessary to increase the compression. Supercharging is nothing more than increasing the compression by forcing the fuel into the cylinder at a pressure above atmospheric, instead of decreasing the distance between the top of the piston and ceiling of the combustion chamber. Supercharging is a reality and is now used on a prominent German stock-car engine.

In the consideration of high compression, turbulence must not be overlooked. To the layman this is something indefinite, nevertheless it is considered one of the greatest factors in making high compression possible. Briefly stated, a turbulence combustion chamber is one so constructed that the gas mixture is given a swirling motion. When ignition occurs the part of the charge initially ignited imparts its flame to the unignited portions with the result that the time interval required to burn all the gas is materially reduced. By a queer coincidence this faster burning allows a higher compression without premature ignition or detonation.

Such parts as pistons, crankshafts, cylinder walls, and bearings, also, will undergo considerable improvement in the future. It has been proved that a high efficiency engine can be operated at full load for 500 hours without breakage. Strangely, however, the parts that show the most wear on such tests are not bearings and valve mechanism as was the case a few years back. Cylinder-wall and piston-ring wear are the two biggest items that balk the designer in his efforts toward extreme durability. A new development is the air cleaner, one of the big steps forward in the attempt to increase the life of cylinder walls and piston rings. It has been proved that much of the deposit in engine cylinders comes from common dust and sand which have entered through the air intake. Six American passenger cars are now using air cleaners on their carburetors and there is every indication that the number will be increased.

Greater power and durability call for a body and chassis built as light as possible consistent with strength and comfort. To meet this demand it is proposed to construct the frame of light alloy on the principle of the sectional bookcase. This type of construction will enable great economies in production and the car can be shipped knocked down to be assembled by the dealer or owner.