Mechanics And Handicraft
Issue: May, 1938
Posted in: Automotive
Tags: inventions wanted
No Comments on WHAT TO INVENT (May, 1938) 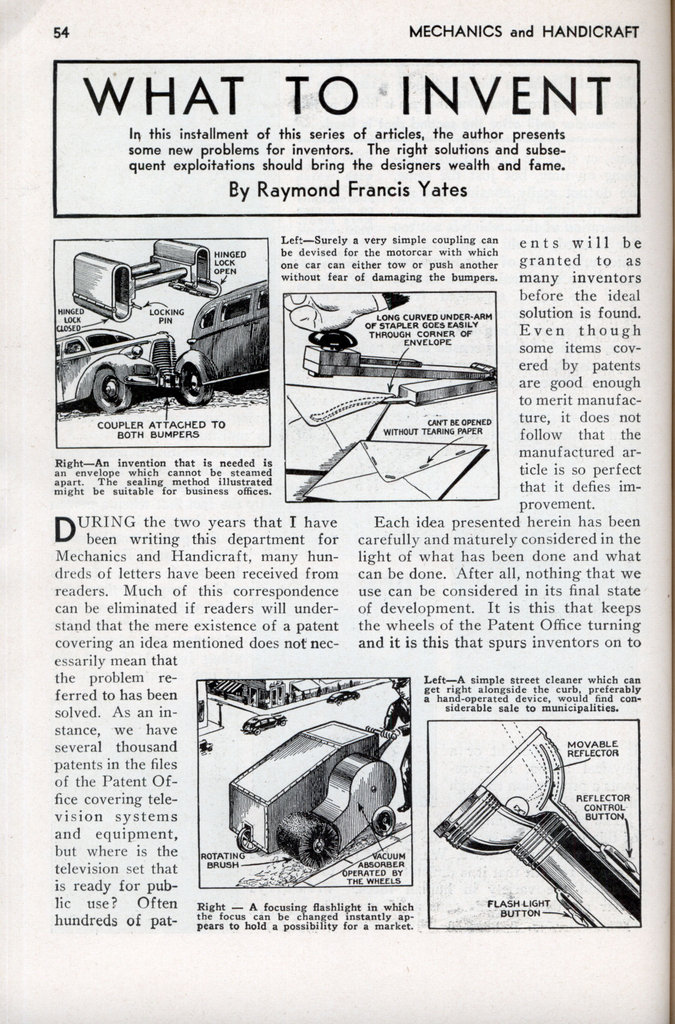 In this installment of this series of articles, the author presents some new problems for inventors. The right solutions and subsequent exploitations should bring the designers wealth and fame.

DURING the two years that I have been writing this department for Mechanics and Handicraft, many hundreds of letters have been received from readers. Much of this correspondence can be eliminated if readers will understand that the mere existence of a patent covering an idea mentioned does not necessarily mean that the problem referred to has been solved. As an instance, we have several thousand patents in the files of the Patent Office covering television systems and equipment, but where is the television set that is ready for public use? Often hundreds of patents will be granted to as many inventors before the ideal solution is found. Even though some items covered by patents are good enough to merit manufacture, it does not follow that the manufactured article is so perfect that it defies improvement.

Each idea presented herein has been carefully and maturely considered in the light of what has been done and what can be done. After all, nothing that we use can be considered in its final state of development. It is this that keeps the wheels of the Patent Office turning and it is this that spurs inventors on to improve things. Patents do not only cover actual improvements in the article itself; they may cover improvements in its manufacture so that it can be produced faster and cheaper.

This month we have many very interesting problems to present; chief among them is the need for an article that can be used to help stalled motorists. How many times during icy weather do we find one motorist trying to push another off an icy spot on the road? In such instances, it usually happens that the bumpers become interlocked, but if not, both are scratched and gouged. What about a little metal coupling device that could be clamped easily on both bumpers and that would permit a motorist either to push or pull his stalled brother? It would seem that such a thing could be sold for a dollar and it almost goes without saying that we have several million car owners in this country who would insist upon carrying such an article in their tool kits. Perhaps the clamping portion of the article can be covered with a rubber pad so that no damage will be done to the plating on the bumpers.

Our Post Office Department attempts to guarantee the privacy of our mail, and indeed it does, as long as the mail is in official hands, but once the mail is delivered, the Post Office loses its control and snooping by unauthorized persons takes place. Millions of letters are steamed open every year. We need an envelope that will defeat such cheap trickery. The inventor can produce a “snoop-proof” container for mail will be able to demand a good price for a thing so badly needed. The problem is not an easy one, because the envelope must be so designed that it can be produced in great quantity on ordinary envelope making machines. Attachments may be made for such machines, but our present equipment cannot be scrapped.

It was too expensive for that.

Vast and useful have been the improvements in connection with flashlights. We now have lights that will throw a beam for a distance of half a mile. Such lights may be focussed from the beam to the floodlight type, but the process is a slow one, involving the adjustment of the reflector with a screw. Why not a quicker adjustment based on moving a button along a short slot cut in the case of the flashlight? Here is something that should be worth at least $50,000 if properly farmed out. The modern American city is just as keenly on the lookout for labor-saving devices as is the manufacturer. Look at our snow removing equipment, our street sweepers and street flushers. Any crowned highway provided with curbing invariably deposits its dirt at the curb, due to the washing action of the rain. The large, motor-driven sweeper finds it difficult to reach the corner between the curbing and the road surface; yet, if this dirt is allowed to remain here, it is eventually washed down into the drains, where its removal becomes costly. Most cities employ men to hand-sweep the space along the curbs. They pile the dirt at intervals and it is then shoveled into pickup trucks. Why not a sort of glorified baby carriage equipped with a small brush to pick this dirt up as fast as the sweeper is pushed by hand and deposit it automatically at certain intervals along the curbing? There should be nothing very difficult about this matter. It is just a case of good designing with an eye on costs. Many cities in this country would be willing to buy a battery of such machines if they were priced at $200.00 each.

It so happens that the floor boards of automobiles are cold; many people are sensitive to this cold. If we think about this, we find that hot water car heaters do not offer much accommodation for cold feet. If our auto supply stores could offer some sort of a deflector which could be attached to heaters and would throw part of the heat downward to the driver’s feet, many thousands of them could be sold if the price was from 25c to 50c.

As has often been stated in this department, inventors should keep alert on changes in public taste and fancy. Today it appears that public taste is changing from tooth paste to tooth powder. It so happens that tooth powder cannot be applied to a brush without considerable waste. Either one holds the brush over the wash bowl and shakes the powder on it, or a quantity of powder is dumped into the palm of the hand and the brush is dipped into it. In either case, powder is wasted. What is needed is a little device on top of the can into which the bush may be placed and where the material will be applied.

We are a bridge, pinochle and poker-playing nation. Many families consume eight to ten packs of cards annually. It often happens that housewives throw cards out, not because they are worn, but because they are ashamed of their soiled condition. Hence, it would seem that there would be a good market for a little card-cleaning machine that would sell for a dollar. Cards can be partially restored by going over them individually with a damp cloth, but such an operation takes a great deal of time—indeed more than the housewife cares to spend.

All department stores display toilet kits for ladies so arranged that they fit over a bath tub. Thus milady may avoid messing up her dressing table and step fresh from the tub with her make-up on. While this is a good idea for the women, when the husband reaches the tub, he is apt to condemn the contraption for getting in his way. The answer would appear to be in a neatly folded table that could be mounted on the wall beside the tub and brought into position by the mere release of a catch. Such an article need not cost much more than the outfits now offered for sale.

Careless gas station attendants often fill car gas tanks to overflowing. This is not serious in the case of a dirty car, but it is most provoking in the case of the man who keeps his car shining and bright, because it leaves a thin, iridescent film on the paint job. Also the gasoline may catch fire. We need a simple visual or audible alarm for gas tanks; something that can be built in for a few cents. Gas station attendants would appreciate them and so would the car owners.