Mechanics And Handicraft
Issue: Sep, 1936
Posted in: General
Tags: inventions wanted, inventors
No Comments on WHAT TO INVENT (Sep, 1936) 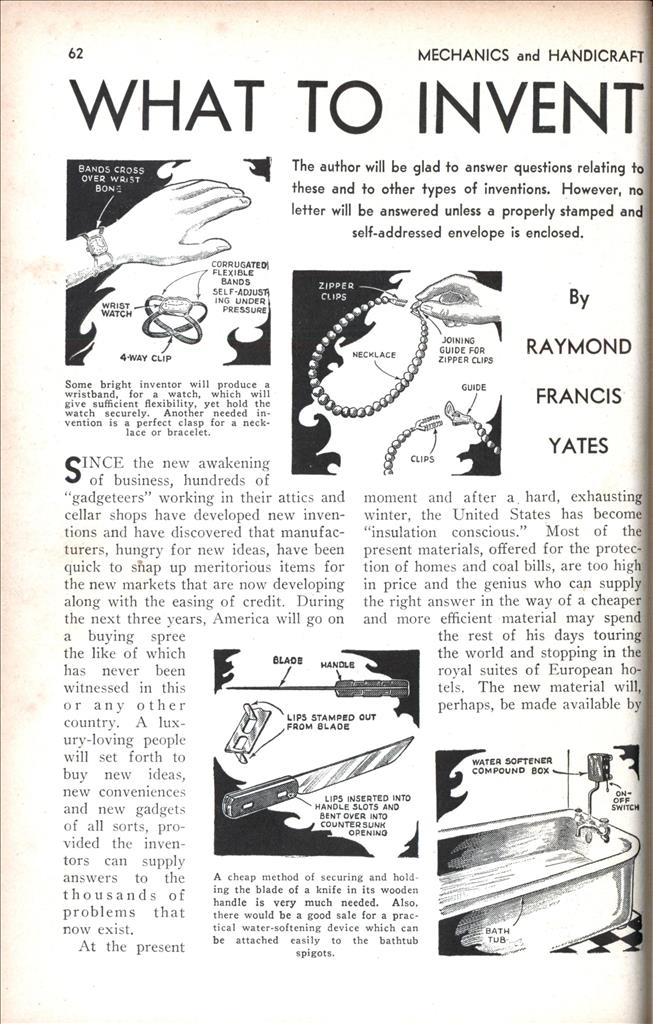 The author will be glad to answer questions relating to these and to other types of inventions. However, no letter will be answered unless a properly stamped and self-addressed envelope is enclosed.

By RAYMOND FRANCIS YATES
SINCE the new awakening of business, hundreds of “gadgeteers” working in their attics and cellar shops have developed new inventions and have discovered that manufacturers, hungry for new ideas, have been quick to snap up meritorious items for the new markets that are now developing along with the easing of credit. During the next three years, America will go on a buying spree the like of which has never been witnessed in this or any other country. A luxury-loving people will set forth to buy new ideas, new conveniences and new gadgets of all sorts, provided the inventors can supply answers to the thousands of problems that now exist.

At the present moment and after a. hard, exhausting winter, the United States has become “insulation conscious.” Most of the present materials, offered for the protecttion of homes and coal bills, are too high in price and the genius who can supply the right answer in the way of a cheaper and more efficient material may spend the rest of his days touring the world and stopping in the royal suites of European hotels. The new material will, perhaps, be made available by a new method of manufacture and should be combustion-proof.

The oil filters on automobiles have to be cleaned out periodically, and this is a messy job—usually done at a garage. Where is the oil filter that will automatically eject its own accumulations of dirt? This should not present a difficult problem for the clever man. At least $100,000 awaits the right idea.

And speaking of oil filters, where is the air filter that will not need to be washed in gasoline every three thousand miles? The air filter is valuable, but it is also a nuisance and cries out aloud for improvement. The larger manufacturers would actually scramble to get the rights for such a new invention.

Special lawn mowers are now used to cut and trim grass growing along the boundaries of gardens. What is needed is a cheap attachment for an ordinary lawn mower, so that this work may be done efficiently without investing ten dollars in a special machine. If such an attachment could be sold for $3.00, the inventor would receive at least $35,000 for his contribution to the work of the home gardener.

Thus, we find problems everywhere. If a wrist watch bracelet is pulled too tight, it interferes with the circulation of blood in the lower part of the wrist and the hand; if it is too loose, the watch shifts its position and tends to slip to the back of the wrist. Is there not some way of overcoming this simple problem with a non-slipping bracelet that need not be drawn tight?

Speaking of jewelry, there is also the problem of the necklace clasp. Many expensive necklaces have been lost because of poorly constructed clasps. Jewelers state that more bracelets and necklaces are lost than any other articles.

The noiseless typewriter is growing in use. Who can invent a simple gadget that can be attached to an ordinary typewriter and will reduce noise by 75% ?

Hat manufacturers (men’s) have for years been looking for a new method of ventilating sky-pieces. In days of yore, holes were made in such hats; but style will not permit such makeshifts today and a new and cleverer method must be employed; something inconspicuous is required. A new method of keeping a hat on the head during high winds is also wanted. The average hat wearer does not want a rope or cord lashed to the lapel of his coat. The problem might be a trifle difficult, but the answer would be worth all the time spent in developing such an article.

The hammer was one of the first tools employed by man. Great improvements have been made in the steel used in the manufacture of such articles, but practically no other improvements have been made. Hammers still come off their handles. A better method of fastening has been needed for centuries. Simple, yes, but where is the answer? The hammer is the forgotten tool merely because it is too common.

A new typewriter ribbon is needed that will not be hammered out of shape and stretched by constant use. When this happens the spools upon which the ribbons are wound become inadequate in size, and the ribbons fail to pass as freely as when they are new. Also there is needed a method of preventing ribbons from drying out when they are exposed to the air.

There is a great market for an electric clock that will keep accurate time for at least one year on a single dry cell for power.

Still a greater market exists for a water softener that can be installed in a bathtub and that will eliminate those rings of “dirt” caused by hard water, which are the bane of every housewife. The water softener should be of such a nature that it need be re-charged not more than once every six months, and it should also be made in two types, one to be built into new tubs and one to be attached to existing tubs. Such a device would not only solve a household cleaning problem but it would also make a better bath possible.

The tea kettle also has its hard-water problem. Scale forms at a high rate, and there is needed some kind of a chemical or mechanical gadget that can be placed in a kettle to overcome this deposit as quickly as it is formed.

The hot handles of pots and pans offer still another kitchen problem of great interest to the housewife. If she could have heatproof handles, she would buy only the products of manufacturers having the right to produce such equipment. Here is a million dollars in royalty within two years’ time.

Today, street sweepers in the smaller cities go along the curbs and pile up the dirt, which is later collected by a wagon or truck by men armed with shovels. What is needed is a small, two-wheeled vehicle equipped with mechanism that will automatically pick this dirt up and deposit it in larger piles to simplify collection. It should be operated by a single man, and work fast enough to keep him moving at a fairly fast-walking pace.

A better method of fastening cheap kitchen knives to their handles is wanted. The present method is years old and simply does not work out. The wooden handle is still demanded by housewives, but they object to the frequency with which the handle parts company with the blade. The new design must be simple and cheap to produce.

The man in the open boat at sea says, “Water, water everywhere, but not a drop to drink.” The present day inventor may also say, “Problems, problems everywhere, but not a drop of inspiration.” That may be true enough, but most inventions are not brought forth on a diet of inspiration. They are brought forth by hard, straightline or streamline thinking. There is a difference between perspiration and inspiration. You don’t have to wait to work up a sweat! So, get busy.