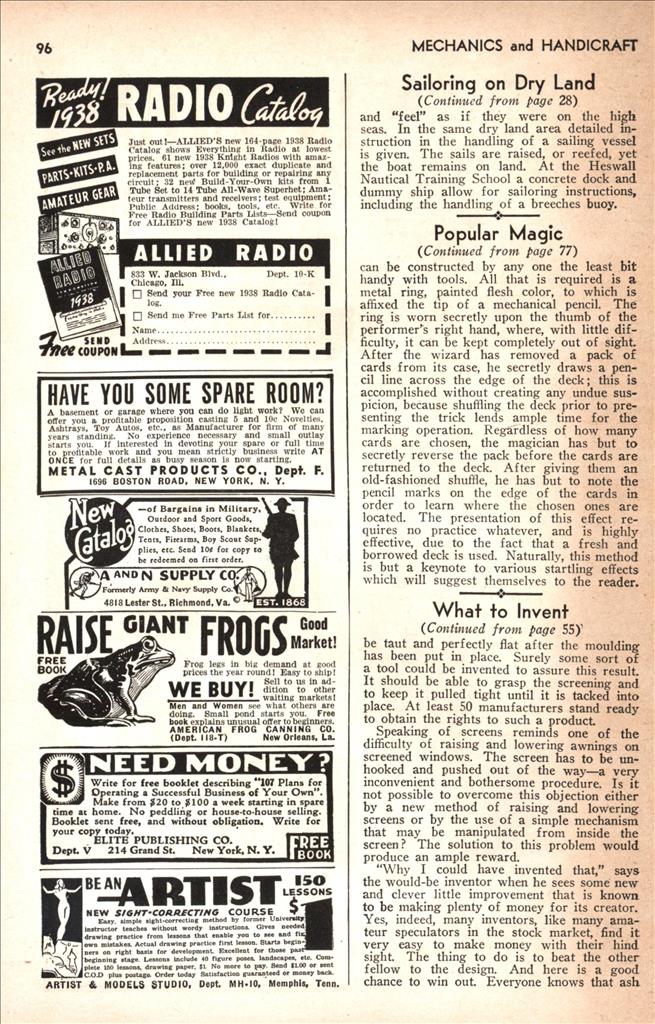 HOW is your ingenuity today? It is to be hoped that it is alert and productive, because this month we present a number of rather engaging problems. They are the everyday sort that one meets from time to time; but the right solutions to them would prove to be money makers. After all, a new mouse trap clever enough to win the approval of five million customers would make as much for its inventor as would a new Diesel engine or a new television receiver. Complication never was a criterion for the production of wealth in inventing — and never will be.

The successful inventor is often a mere opportunist. He has to be. He watches the public, tries to find out in what it is interested and what it is doing at the moment. At the present time the public has “gone hobby.” There never was a time when hobbies of various kinds were more popular than they are today. Among the current hobbies that are enjoying a new and robust stimulation, photography stands out prominently. What can the inventor do for these people who have turned to the camera for relaxation? Many things; but chief among them is a recording camera for the more careful and exacting men and women who have embraced this most absorbing work.

CAN YOU INVENT THESE THINGS?

Millions Being Made with New Inventions; America Needs New Gadgets.

The careful worker likes to keep a record of his exposures in his effort to master the art and would buy any good camera that automatically recorded the time of exposure, the time of the day and the stop that was used when each picture was taken. All of this could be done on the edge of the film and it would make a most useful reference. Naturally, such a mechanism could be applied only to the more expensive cameras.

No other field of human activity is as broad as the field of invention, hence it becomes possible to speak of the need of recording cameras and shoe polish in the same breath. But what is wrong with shoe polish? The first objection to ordinary polish is that it does not stay put; it is far too perishable once it has been placed on shoes. A walk through dew-covered grass will ruin the best shine.

No doubt there is a chemical, or a substance, which someday will be added to shoe polish to make it really waterproof. The man .who discovers this combination will become wealthy within a year’s time.

The typewriter eraser is a combination of fine-ground sand and rubber. When such an eraser is used on a typewriter a quantity of this sand falls down into the mechanism where it causes undue wear. Sand is fatal to machinery of any kind. This problem may be solved in two ways; either by the production of a more efficient eraser, without sand, or some sort of a guard on typewriters to prevent the sand from sifting down into the works. Either answer should be worth $50,000.

The home mechanic, or the carpenter who has either made or repaired screens for windows, knows how difficult it is to stretch the screening so that it will be taut and perfectly flat after the moulding has been put in place. Surely some sort of a tool could be invented to assure this result. It should be able to grasp the screening and to keep it pulled tight until it is tacked into place. At least 50 manufacturers stand ready to obtain the rights to such a product Speaking of screens reminds one of the difficulty of raising and lowering awnings on screened windows. The screen has to be unhooked and pushed out of the way—a very inconvenient and bothersome procedure. Is it not possible to overcome this objection either by a new method of raising and lowering screens or by the use of a simple mechanism that may be manipulated from inside the screen ? The solution to this problem would produce an ample reward.

“Why I could have invented that,” says the would-be inventor when he sees some new and clever little improvement that is known to be making plenty of money for its creator. Yes, indeed, many inventors, like many amateur speculators in the stock market, find it very easy to make money with their hind sight. The thing to do is to beat the other fellow to the design. And here is a good chance to win out. Everyone knows that ash trays tip over and that the housewife is called upon to clean up many such resulting messes. It would seem fairly easy to make an ash tray which would automatically cover itself when tipped beyond a certain critical angle. Such a tray could be dropped on the floor without danger of dumping its contents.

What was said for the non-tipable or unspillable ash tray also might be said for coasters used for glasses. The number of bridge table accidents, wherein glasses are tipped during dealing, is legend. We need coasters that will make such accidents impossible.

In line with our previous comment in connection with hobbies it should be borne in mind that archery is now receiving a great deal of attention, and that a newly designed, cheap and powerful metal bow would be a winner, especially for the younger folk. Naturally such a bow would have to be as light as the wooden ones. (Metal bows are available but could be improved greatly.) When little Willie, all dressed up in his Sunday best, gets his hands on an ice cream cone he rapidly degenerates into a most unpromising spectacle. If mother could buy a dripless cone for him she would make the inventor of that cone a very happy man— and little Willie would remain a respectable person while satisfying his appetite for ice cream.

The manufacturers of electrically operated ice boxes are looking for a simple mechanism to permit such boxes to defrost themselves within a minute’s time.

A great many uses could be found for a self-closing cork to be applied to pop and other bottles. Such a device should permit fluid to flow only when the bottle is inverted. A gadget of this kind would be very handy. It could be sold separately in the chain stores.

Millions of people in this country keep canary birds. The ordinary cage presents many hazzards and birds often hang themselves or otherwise meet with death in some of the “ornamental” boxes. What is needed is a safety cage—one that will make it impossible for accidents of any kind to happen.

Pocket nail clippers have never been really popular for the simple reason that one must use a file afterwards because a very rough edge is left. Men and women would use such clippers in greater number if smooth cuts were produced.

Now that the bathing season is here again we are reminded that the ladies still want a leakproof cap which will not be so tight as to stop, or interfere with the circulation of blood, but will, at the same time prevent any water from seeping through. This invention, without exaggeration, would be worth at least $500,000.

Now that pianos are becoming popular again, manufacturers could use a moth-proof substitute for the felt on the hammers, etc.

The inventor of a really sanitary pillow permitting a large volume of air to circulate through it and, at the same time, soft and comfortable, would be a fortunate person. Rubber as a material is ruled out. Such pillows, unlike the pillows of today, should be washable.