Modern Mechanix
Issue: Apr, 1932
Posted in: Automotive
13 Comments on What Tomorrow’s Cars Will Look Like (Apr, 1932) 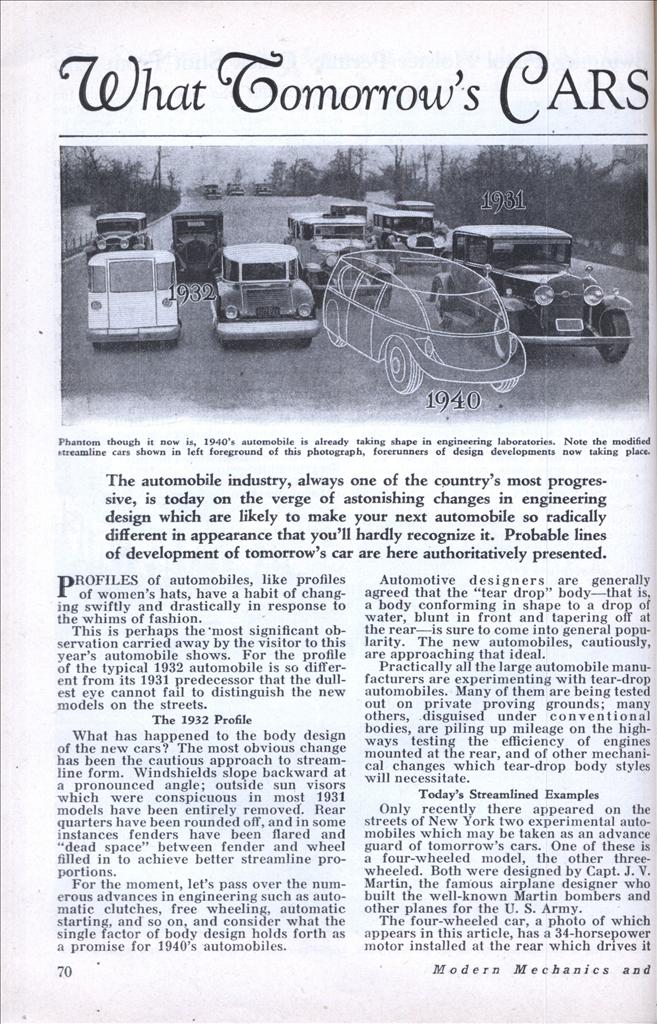 The automobile industry, always one of the country’s most progressive, is today on the verge of astonishing changes in engineering design which are likely to make your next automobile so radically different in appearance that you’ll hardly recognize it. Probable lines of development of tomorrow’s car are here authoritatively presented.

PROFILES of automobiles, like profiles of women’s hats, have a habit of changing swiftly and drastically in response to the whims of fashion.

This is perhaps the most significant observation carried away by the visitor to this year’s automobile shows. For the profile of the typical 1932 automobile is so different from its 1931 predecessor that the dullest eye cannot fail to distinguish the new models on the streets.

The 1932 Profile What has happened to the body design of the new cars? The most obvious change has been the cautious approach to streamline form. Windshields slope backward at a pronounced angle; outside sun visors which were conspicuous in most 1931 models have been entirely removed. Rear quarters have been rounded off, and in some instances fenders have been flared and “dead space” between fender and wheel filled in to achieve better streamline proportions.

For the moment, let’s pass over the numerous advances in engineering such as automatic clutches, free wheeling, automatic starting, and so on, and consider what the single factor of body design holds forth as a promise for 1940’s automobiles.

Automotive designers are generally agreed that the “tear drop” bodyâ€”that is, a body conforming in shape to a drop of water, blunt in front and tapering off at the rearâ€”is sure to come into general popularity. The new automobiles, cautiously, are approaching that ideal.

Practically all the large automobile manufacturers are experimenting with tear-drop automobiles. Many of them are being tested out on private proving grounds; many others, disguised under conventional bodies, are piling up mileage on the highways testing the efficiency of engines mounted at the rear, and of other mechanical changes which tear-drop body styles will necessitate.

Today’s Streamlined Examples Only recently there appeared on the streets of New York two experimental automobiles which may be taken as an advance guard of tomorrow’s cars. One of these is a four-wheeled model, the other three-wheeled. Both were designed by Capt. J. V. Martin, the famous airplane designer who built the well-known Martin bombers and other planes for the U. S. Army.

The four-wheeled car, a photo of which appears in this article, has a 34-horsepower motor installed at the rear which drives it at a top speed of 110 miles an hour, with an average gas consumption of 45 miles to the gallon. This phenomenal performance is mostly attributed to the minimized air resistance which the streamlined model has to overcome.

Speed tests on conventional cars have demonstrated the fact that simply by removing such obstructions as headlights and fenders, the top speed of a car can be increased some four to five miles. When one considers the fact that at high speeds practically the only resistance the car has to overcome (outside of internal friction) is air pressure, the true value of streamlining becomes apparent.

Cars Streamlined Underneath Too In Capt. Martin’s car, a continuous metal bumper encircles the base of the entire machine, except for a space alongside the front wheels required in turning. This bumper clears the ground by some six inches, and the entire riding compartment is scarcely more than half a foot off the ground. This low-slung center of gravity has two effects: it practically eliminates danger of overturning, and it makes possible a comparatively smooth surface underneath the entire car. Streamlining, in other words, must be continuous over the entire surface of the car. Each wheel in the Martin car has its individual spring. As a matter of fact, it is not a spring at all, in the orthodox sense, but rubber shock cord of the type long used in airplanes to absorb strains on the landing gear.

You have probably noticed the difference in riding qualities between the front and rear seats of conventional motor cars. Most of the bounces and jolts are likely to affect the rear seat passengers, while the driver rides in perfect comfort. This is because the front seat is midway between the two axles of the car, where it is pretty well cushioned from jolts. In the Martin car, both seats are located between the axles, and this, in addition to the individual wheel suspension, is said to impart remarkable riding qualities.

Three-Wheel Design The second car of Martin design is a three-wheeler whose most obvious novelty is the location of its door in the front. This arrangement gives it a closer approach to the ideal tear drop form than any car yet designed. And for economy, this little car can have few rivals if it lives up to its advance notices. Eighty-five miles to the gallon of gas and a top speed of 75 miles an hour are promised.

Both of these streamlined cars have four-cylinder motors, with the transmission mounted in the rear of the car along with the engine.

Neither of these cars, of course, represents the ultimate 1940 design, but they are the first tangible evidence the public has had of the general trend of motor car design.

New Spring Suspension Styles The entire system of spring suspension will be changed in tomorrow’s cars. Springs will have no shackles and will, in fact, require no positive fastening to the frame, either by metal or rubber devices. This will leave them free to perform their suspension functions; they will no longer be required to take driving or twisting forces, as is at present the case.

Tires and wheels will be regarded as single units in the 1940 car. In fact, the wheel will be reduced to little more than a hub on which to mount a super-balloon tire that operates at air pressures of 10 to 12 pounds. Such tires are already on the market, developing out of the familiar “air wheel” which has proved so popular for airplane use. These tires, in conjunction with individually suspended wheels, will give new standards of riding smoothness unattained in the most costly present-day cars. The advantage of independent wheel suspension is that a wheel can absorb the jolt of a rut in the road without transmitting the shock through the entire chassis of the car.

Present automobiles universally use the four-stroke cycle gasoline motor. The two-stroke cycle motor, however, is being given careful study and may be used in the next decade’s cars. Such motors can be made lighter and more compact than the four-cycle type, and can deliver high turning effort at slow speed which is required for rapid acceleration.

Why We Haven’t Had Streamlined Cars The Prince of Wales has for two years driven a streamlined car designed by Sir Denistoun Burney, builder of the British dirigible B-100. The car is very similar in its appearance to Capt. Martin’s four-wheeler. Yet the British public has not yet fallen over itself in its eagerness to purchase this type of machine.

Why? Well, aside from initial expense, there is the objection that the public is not yet ready for cars of such bizarre appearance. And there is also the objection, advanced by some engineers, that streamline design is of negligible advantage on cars traveling at moderate rates of speed. This is perfectly true. When speeds approach sixty to seventy miles an hour, streamlining becomes tremendously important. Hold your hand out the window of a car traveling at this rate if you want some conception of the force exerted by so seemingly insignificant a thing as air pressure. Top speeds of sedans, it has been found, can be increased two to three miles an hour by so simple an expedient as closing all the windows !

Advantages of Rear Engine Drive But, though its coming will be gradual, in deference to the hesitancy of the buying public to invest in anything freakish, the tear-drop car is on the way. The single factor of moving the motor to the rear makes possible a body design with such unique advantages that it must eventually become universal. Heat and noise of the engine are behind the passengers, so that they can ride in comfort. Forward vision becomes much less obstructed with the elimination of the long hood over which drivers must at present peer. That same engine can be better balanced at the rear. No long propeller shaft is necessary. This makes it possible to lower the frame of the car and smooth off its under parts.

Some of the developments announced on 1932 models will be applicable to tear-drop cars; others will drop by the wayside. For instance, many cars this year have announced X-type frames, in which the body members are braced by steel girders in the shape of an X between the members. Individual wheel suspension will eliminate the need for such rigidity; in fact, it will eliminate axles as we know them. Car frames will be built along entirely different lines.

But such advances as “startix,” which cranks the motor automatically when the ignition is turned on, will be just as valuable in a teardrop car as any other style. Likewise, freewheeling, automatic clutches, and automatic gear shifts will always find favor. By the time the tear-drop car is commercially accepted, practically everything about it will be automaticâ€”it will probably halt by itself at sight of a red light.

Motors in the tear-drop car will not be the multi-cylinder type that have gained such favor recently. The reasons for this are obvious: the space in which the motors can fit is limited, and compact designs, probably V-type, will win favor. Instead of being mounted lengthwise, motors at the rear will very probably be placed crosswise of the car, with obvious savings of space.

Cost of producing such cars need not be any greater than with present types. The probability is that costs will come down, since so many heavy parts will be eliminated. Once manufacturers are assured of steady demand, they’ll not hesitate to re-equip their factories for quantity productionâ€” and that’s the answer to low unit price and the reason why we get so much value for today’s automobile dollar.

Of course, when we get our new tear-drop cars we’ll probably have to learn the technique of driving all over again, because we’ll be confronted with entirely different operating conditions. But that’s part of the fun!