Science And Mechanics
Issue: Feb, 1970
Posted in: Personal Appearance, Sexuality
8 Comments on What turns you on? (Feb, 1970) 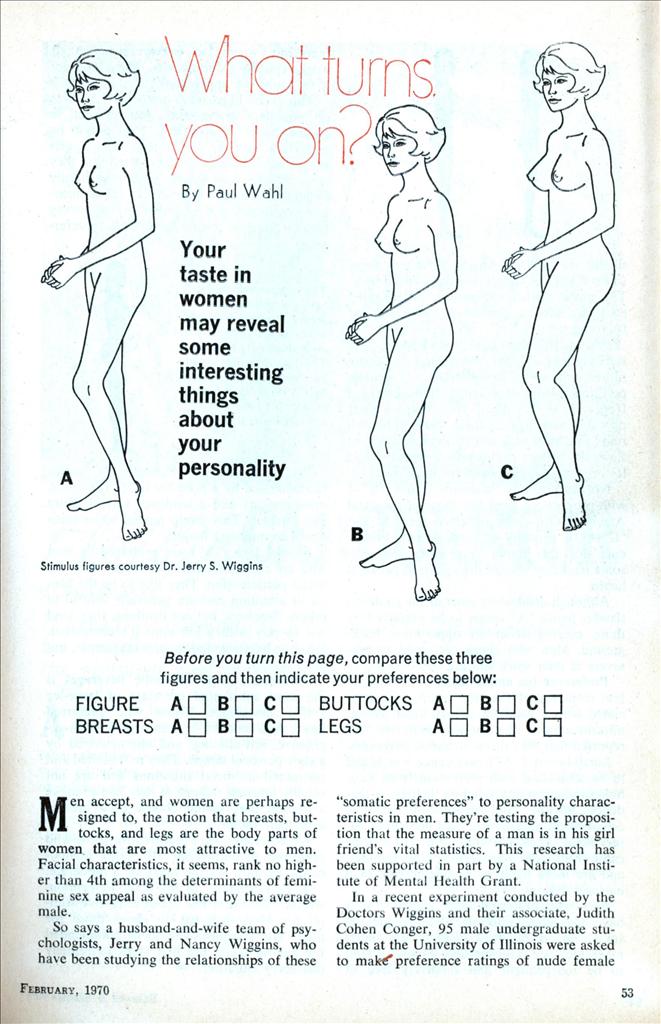 What turns you on?

Your taste in women may reveal some interesting things about your personality Men accept, and women are perhaps resigned to, the notion that breasts, buttocks, and legs are the body parts of women that are most attractive to men. Facial characteristics, it seems, rank no higher than 4th among the determinants of feminine sex appeal as evaluated by the average male.

So says a husband-and-wife team of psychologists, Jerry and Nancy Wiggins, who have been studying the relationships of these “somatic preferences” to personality characteristics in men. They’re testing the proposition that the measure of a man is in his girl friend’s vital statistics. This research has been supported in part by a National Institute of Mental Health Grant.

In a recent experiment conducted by the Doctors Wiggins and their associate, Judith Cohen Conger, 95 male undergraduate students at the University of Illinois were asked to make preference ratings of nude female silhouettes with body parts of various sizes. (Two classes of stimuli are reproduced here. The more realistic figures on the opening page are second generation, prepared for future tests.) Personality and background data also were collected from these subjects. Some rather interesting correlations of somatic preferences and personality traits emerged from this study. When you compare your own selections against these findings, bear in mind that they may not be entirely relevant since the college group tested probably had less mature and well-developed tastes.

Not surprisingly, standard figure “B”— with proportions most like those of the Ideal American Girl—was preferred over “A” and “C” by a majority of those tested. Preference for this figure was associated with some tendency toward disorganized personal habits.

Although disliked by most of the students, slender figure “A” seems to be preferred by those coming from an upper-class background. Men who chose “A” tend to persevere in their work and are conformists.

Preference for ample figure “C”, liked by few members of the test group, was associated with a need for achievement. A significant number of those who preferred “C” reported that they drink alcoholic beverages.

Small-breast (“A”) preference was found to be associated with abstention from alcohol, fundamentalist religious beliefs, a tendency toward mild depression, lack of achievement motivation, and indefinite career plans. These students were conformists, came from large non-working-class families, and are more likely to be engineering than business majors.

Men who preferred large breasts (“C”) have masculine interests, date frequently, smoke and drink, read Playboy and sports magazines, are not especially generous, tend to be independent and relatively free of fears and worries, lack perseverance in their work, and are exhibitionists. They tend not to be from the upper class.

Those who liked small buttocks (“A”) are self-confident, persevering, feel no need to be the center of attraction, tend not to be education majors, and rarely read sports magazines. These subjects reported that they were breast-fed as infants (a finding hardly anticipated when a query as to infant feeding experience was included in the survey for its possible relevance to breast preference).

Preference for large buttocks (“C”) was characterized by a need for order (neatness, organization) and a tendency to feel guilty and inferior. This group tended to be business (accounting) majors.

Slender legs (“A”) are preferred by men who are characterized by a strong need for . social participation. They like to be the center of attention and are generally helpful to others. Smokers, but not drinkers, they tend not to stay with a job until it’s completed. Reading habits include sports magazines, but not Playboy.

Abstinence from alcoholic beverages is the most substantial correlate of large-leg (“C”) preference. Those who preferred heavy legs tend to be intraceptive, non-aggressive, self-abasing, and characterized by a slow personal tempo. They’re inhibited and restrained in social situations and are not usually business majors. If they had to make a choice, they would choose their mother over their father.

No correlates were reported for those who preferred medium-sized “B” body components. Perhaps it’s the mark of a moderate.

J. E. Hochberg, in his book Perception, wrote: “We know less about attractive stimuli for Man than we do about those for fish.” The Wigginses are to be commended for having taken the first steps to remedy this sorry situation.