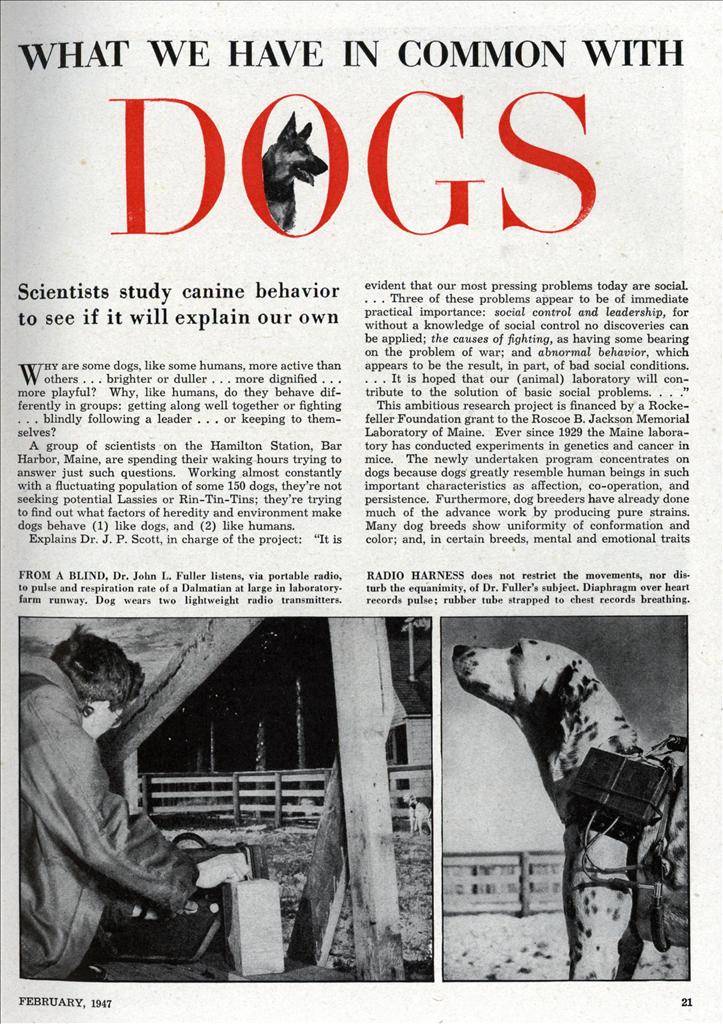 WHAT WE HAVE IN COMMON WITH DOGS

Scientists study canine behavior to see if it will explain our own Why are some dogs, like some humans, more active than others . . . brighter or duller . . . more dignified . . . more playful? Why, like humans, do they behave differently in groups: getting along well together or fighting . . . blindly following a leader … or keeping to themselves?

A group of scientists on the Hamilton Station, Bar Harbor, Maine, are spending their waking hours trying to answer just such questions. Working almost constantly with a fluctuating population of some 150 dogs, they’re not seeking potential Lassies or Rin-Tin-Tins; they’re trying to find out what factors of heredity and environment make dogs behave (1) like dogs, and (2) like humans.

Explains Dr. J. P. Scott, in charge of the project: “It is FROM A BLIND, Dr. John L. Fuller listens, via portable radio, to pulse and respiration rate of a Dalmatian at large in laboratory-farm runway. Dog wears two lightweight radio transmitters.

evident that our most pressing problems today are social. . . . Three of these problems appear to be of immediate practical importance: social control and leadership, for without a knowledge of social control no discoveries can be applied; the causes of fighting, as having some bearing on the problem of war; and abnormal behavior, which appears to be the result, in part, of bad social conditions. . . . It is hoped that our (animal) laboratory will contribute to the solution of basic social problems. . . .” This ambitious research project is financed by a Rockefeller Foundation grant to the Roscoe B. Jackson Memorial Laboratory of Maine. Ever since 1929 the Maine laboratory has conducted experiments in genetics and cancer in mice. The newly undertaken program concentrates on dogs because dogs greatly resemble human beings in such important characteristics as affection, co-operation, and persistence. Furthermore, dog breeders have already done much of the advance work by producing pure strains. Many dog breeds show uniformity of conformation and color; and, in certain breeds, mental and emotional traits are also consistent. Examples are the trailing capacity of bloodhounds, the pointing ability of pointers.

At the laboratory one group of researchers, working in genetics, is selecting outstanding strains within the breeds showing uniformity, and crossing them with breeds that never show the uniform characteristics.

Another group is exploring the extent to which the behavior of dog breeds is the result of “dog society.” Young pointers, for example, are normally nursed and raised by a pointer mother. Dr. C. C. Little, Director of the Laboratory, asks: What would happen if pointer pups were raised by chows? What would happen to a puppy if it were raised in complete isolation from other dogs, and saw only human beings?

Dogs in society Observations, thus far, have been made on dogs inside the laboratory, at large alone, and at large with other dogs.

In the lab, staff members watch various dogs respond to such stimuli as bells, harmless electric shock, and colored motion pictures about dogs. Breeds differ widely and consistently in emotionality and attentiveness. The barkless Basenji (page 20), for instance, is comparatively phlegmatic; the poodles try to fight the screen the minute the movie starts.

To combat the unnaturalness of the laboratory situation, a dog’s responses are either observed through windows in an adjoining room or registered by radio. In the latter case the dog carries a set with special pick-ups that transmit signals of activity, respiration, and pulse to an observer and recording equipment out of sight of the dog. Researchers also “listen in” on the various dogs’ social behavior.

The following types of dogs’ behavior are clearly social: (1) sexual; (2) fighting, both aggressive and defensive; (3) imitative, which may or may not involve learning; (4) the giving of care and attention, such as exhibited by parents toward offspring; and (5) calling or signaling, usually practiced by young animals.

Types of behavior that may be studied as either social or nonsocial are: (1) eating, (2) investigating, and (3) shelter-seeking (including the urge to huddle for warmth).

The research in dog genetics and the program of observation and analysis of dog behavior will merge when it becomes possible to determine whether or not each type of behavior is based upon hereditary factors, and how much each type is affected by changes in the environment.