What Will Come Next—Air Trailers or Mammoth Planes? (Jan, 1931)

Man, this guy was good at predicting the future. I’ve heard that Jet Blue is going to be dropping container loads of passengers by parachute starting next year. 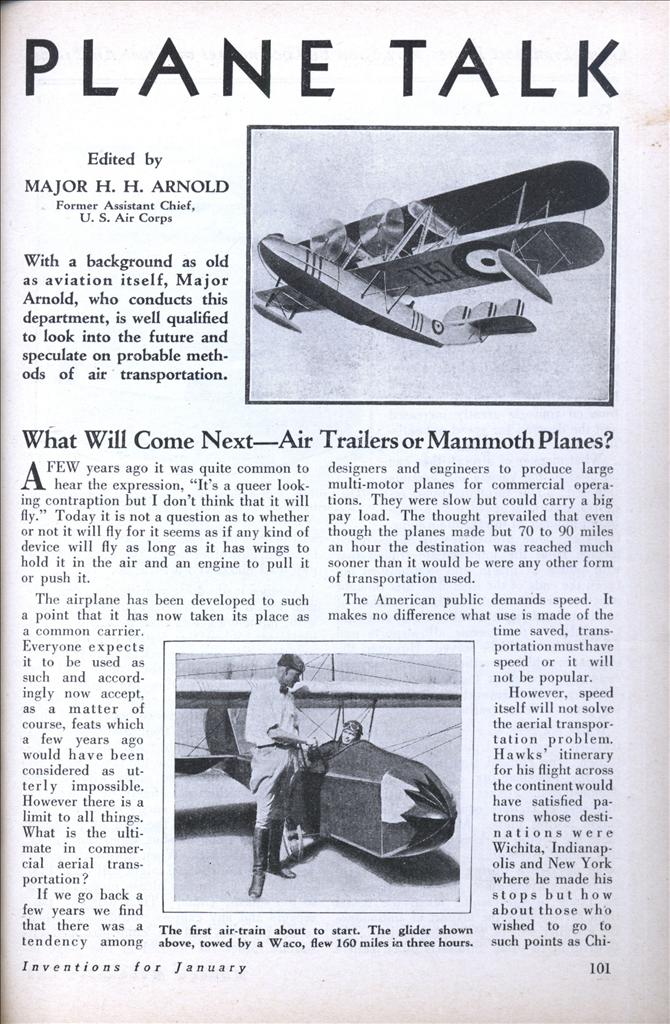 What Will Come Next—Air Trailers or Mammoth Planes?

With a background as old as aviation itself, Major Arnold, who conducts this department, is well qualified to look into the future and speculate on probable methods of air transportation.

A FEW years ago it was quite common to hear the expression, “It’s a queer looking contraption but I don’t think that it will fly.” Today it is not a question as to whether or not it will fly for it seems as if any kind of device will fly as long as it has wings to hold it in the air and an engine to pull it or push it.

The airplane has been developed to such a point that it has now taken its place as a common carrier. Everyone expects it to be used as such and accordingly now accept, as a matter of course, feats which a few years ago would have been considered as utterly impossible. However there is a limit to all things. What is the ultimate in commercial aerial transportation?

If we go back a few years we find that there was a tendency among designers and engineers to produce large multi-motor planes for commercial operations. They were slow but could carry a big pay load. The thought prevailed that even though the planes made but 70 to 90 miles an hour the destination was reached much sooner than it would be were any other form of transportation used.

The American public demands speed. It makes no difference what use is made of the time saved, transportation must have . speed or it will not be popular.

However, speed itself will not solve the aerial transportation problem. Hawks’ itinerary for his flight across the continent would have satisfied patrons whose destinations were Wichita, Indianapolis and New York where he made his stops but how about those who wished to go to such points as Chicago, St. Louis or Kansas City? Obviously on all long lines provisions must be made for branch connections and intermediate stops. However, if such stops are made the time en route is greatly increased and the demand for speed not satisfied.

What manner of aircraft then can be used to the variety of demands imposed? The through traffic requires maximum speed with a minimum number of intermediate stops. However, there probably will be as much income from the intermediate traffic, that with points of origin and destinations between the ends of the line. The first thought which comes to mind is a large number of air-liners each with a different destination. Certainly by this means all airports and branch lines could be served. However, the expense would be terrific. Another solution is to put into effect the idea advanced by Anthony Fokker several years ago—a towing plane with air trailers.

It has not been so very long since Hawks traveled across the United States in an air trailer. The elapsed time was rather long but the practicability of the trailer was demonstrated. Fokker advanced the idea that several trailers could be pulled by a single towing plane. As a matter of fact there are people working along that line at this time. Accordingly perhaps we will some day see a towing plane with several air trailers flying along the route from say, St. Louis to Cleveland. When the aerial train arrives over the airport at Indianapolis, a trailer will be uncoupled and brought to earth by its pilot. Similarly other trailers will deliver their cargoes to Dayton, Columbus and any other point en route where a pay load makes it worth while.

Another method of securing the same service would be to have large cargo planes with parachutes attached to light weight platforms. When the destination for cargo or passengers was reached, the steward, after loading up the platform, could pull the lever which would allow the parachute to deliver its load. The cabin of the large plane would have to be so constructed that these parachutes with their platforms could be set up during flight. Perhaps an additional cabin would solve the problem as all arrangements could be made without discomfort to other passengers or making a rearrangement of the cargo necessary. An opening in the floor the size of platform with a trap door to shut when not in use would fill the bill. When approaching the destination the steward might call out, “Passengers for Columbus please move forward to the shuttle ‘chute.” Then baggage, passengers and any express would be attached to the platform and the ‘chute dropped. It sounds rather far fetched at this stage of aircraft development but passing years change many things.

It is quite easy to picture a towing plane with its trailers taking the air but things look different when plans are made for its accomplishment. The train must of necessity be rather long and thus requires a very large airdrome. The various cables connecting the plane to the first and successive trailers gives an enormous drag as the train endeavors to get up flying speed. This further emphasizes the need for a large airdrome. The angle which the trailers make with the line of travel differs while running along the ground from that taken when traveling through the air. This could be taken care of by a system of bridles attaching the trailers to a main cable.

The problem becomes simpler when the train is in the air. The pilots of the trailers then have a steady pull to take care of.