The last section of this article (Buying Hats by Radio) seems like a weird addition. Apparently television and radio advertising are the only thing that can save the world. 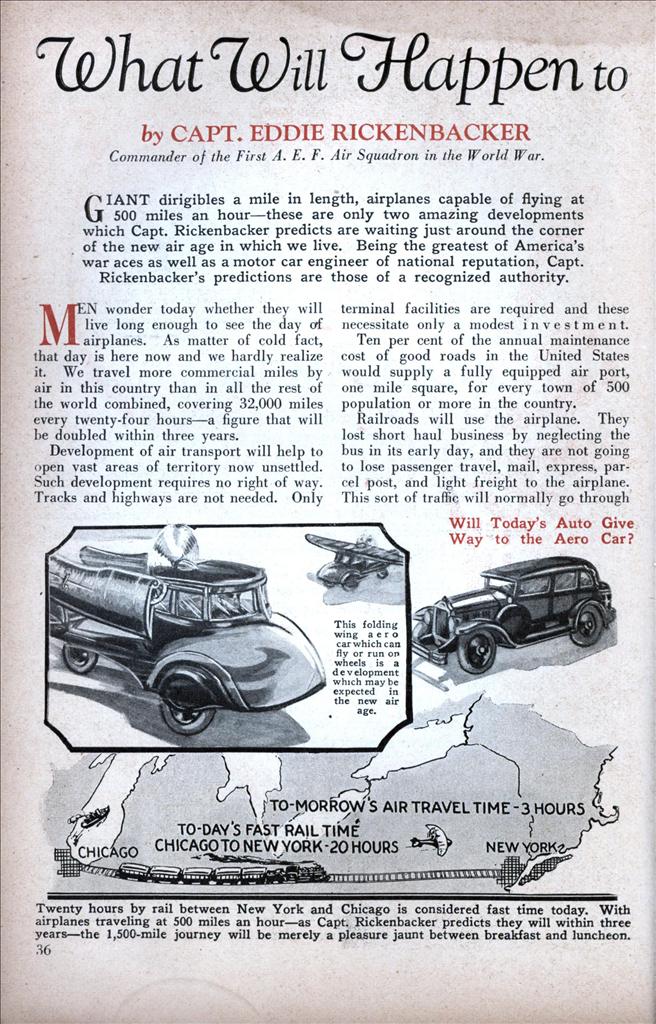 What Will Happen to Flying?

Commander of the First A. E. F. Air Squadron in the World War.

GIANT dirigibles a mile in length, airplanes capable of flying at 500 miles an hour—these are only two amazing developments which Capt. Rickenbacker predicts are waiting just around the corner of the new air age in which we live. Being the greatest of America’s war aces as well as a motor car engineer of national reputation, Capt. Rickenbacker’s predictions are those of a recognized authority.

Men wonder today whether they will live long enough to see the day of airplanes. As matter of cold fact, that day is here now and we hardly realize it. We travel more commercial miles by air in this country than in all the rest of the world combined, covering 32,000 miles every twenty-four hours—a figure that will be doubled within three years.

Development of air transport will help to open vast areas of territory now unsettled. Such development requires no right of way. Tracks and highways are not needed. Only terminal facilities are required and these necessitate only a modest investment.

Ten per cent of the annual maintenance cost of good roads in the United States would supply a fully equipped air port, one mile square, for every town of 500 population or more in the country.

Railroads will use the airplane. They lost short haul business by neglecting the bus in its early day, and they are not going to lose passenger travel, mail, express, parcel post, and light freight to the airplane. This sort of traffic will normally go through the air and would make up the biggest transportation industry in the world. The railroads see the possibility and are intent upon developing it.”

One feature of their plans is the combination of Pullman and plane service for cross-country travel. The New York Central will haul passengers from New York to Detroit over night. They will take a plane to Fargo, North Dakota, during the day and entrain for Spokane for second night’s ride. The following day they will fly on to the coast. The Pennsylvania is organizing a similar service with changes at Columbus, Wichita, and Tuscon.

Within a few years this combined service will be superseded by airplanes covering the entire route in twenty to twenty-five hours. These planes will have sleeping quarters, dining salons and all requisite travel comforts.

All rail lines will be paralleled by air lines under the same management. Traffic is the railroad companies’ business. They are awake to the possibilities of air transport and are not going to let new men take the business away from them. They will build their own systems and compete with newcomers or will buy them out.

It may safely be predicted that passenger trains will pass out of use within fifteen years. Long hauls will be covered by air, short hauls by private cars and by public buses.

Railroad yards will decked over and utilized as landing fields so that planes can alight in the hearts of the cities. Railroad traffic, in the meanwhile, will be handled by electric locomotives on the lower levels.

These changes will come about because time demands them. Time cannot be saved up and used as needed in the future. It must be used now if at all, and the man who uses it most effectively has all the advantage in the commercial competition of today. That competition is pitiless— far more so than in military combat where all the resources of science are marshalled to the help of the injured. In commercial warfare, the man is soon eliminated who does not make the most effective possible use of his time.

The present transport plane is as obsolete as a five-year-old car. Cruising speeds of 100 to 150 miles an hour for transport planes are perfectly feasible. With such planes the Pacific Ocean, in hours of travel, would be brought as close to New York as Detroit is now, and Detroit would be four hours from New York instead of the fourteen hours required by the fastest trains.

Air transport would thus, in effect, reduce the size of the United States to the size of the state of Texas. The fastest train across Texas requires twenty-four hours. At an average speed of 150 miles a plane crosses the continent in less time than that. It is very difficult to conceive of speed in terms of the future. The Spad plane as used by me during the World War travelled 125 miles an hour and was the fastest thing in the world. Single seater planes have been built capable of 350 miles an hour. It is only a matter of engineering to build a plane to go 500 miles an hour and someone will do it somewhere on earth within three years.

Big as present planes are, they are mere kites in comparison to the ones to be used in the future. The biggest thing we know of on earth is the ocean of air in which our earth floats. No one has ever conceived how vast this ocean is, and upon it every city and town is a port. The possible size for a plane or dirigible is therefore limitless, and we must expect them to increase largely in size because the ratio of pay load increases with the size of the unit. Size is now merely an engineering problem of control.

A plane is now being built in Germany that will carry 100 passengers. It is powered with 12 engines of 500 horsepower each, giving a total of 6,000 horsepower, and will fly at full load with any seven of these engines. It will have a cruising radius of 5,000 miles.

Cruising radius is merely a matter of supplies. When planes and dirigibles can carry reserve supplies of oil and fuel, they can go anywhere. Under present conditions, they must go straight ahead on their course. If ocean vessels had to operate the same way, they would lose 15% to 20% of their shipping every year through storms. But ships go around storms or lay by until the weather ahead has cleared. Very soon aircraft will do the same.

In fact, the Graf Zeppelin abundantly proved the value of cruising radius in crossing to Lakehurst. It travelled far south to avoid a storm, was delayed a full day, yet arrived after 6,000 miles with sixty-five hours of fuel still in the tanks.

England is building two dirigibles of 5,000,000 cubic feet which are equipped with dining rooms for fifty people, dance floors, promenade decks, showers in passengers’ cabins. One of these will go into passenger, mail, and express service between London and Sydney, Australia, going always from west to east with the prevailing winds and thus circling the globe on each round trip. The other is expected to go into service between London and Buenos Aires. This trip, which now requires thirty days by the fastest boat connections, will then be made in three and one-half days. Dirigibles can be built to any size and may eventually be a mile in length and of 25,000,000 to 30,000,000 cubic feet capacity. Such ships would be capable of staying in the air five or even ten years, making repairs en route and taking on new supplies without stopping.

The dirigible would therefore go continually on its way around the world. As it approached a city another ship would go out to meet it and dock on its decks. It would unload supplies, exchange cargoes and passengers, and possibly relieve the crew, then take off again and return to its home city.

It is worthy of note that the airplane would be largely useless without the automobile. No one would use aircraft if he had to travel by horse and buggy from the airport to the heart of the city. There must be cars at both ends of the airline, which increases the use of cars and means increased business for automobile makers.

Private ownership of planes is coming through the keen interest of the younger generation. The motor car was developed in precisely the same way. It was commercialized by the generation succeeding the one which created it. Older men have responsibilities which restrain them from developing the new to its utmost extent. The youngsters, who grow up with it, make full use of it.

These amazing developments in transportation are equalled, if not even surpassed, by improvements in communicating ideas. Here radio and television are supreme. And so rapidly is it being developed, that very soon important advertisements will be dispatched by television to the newspapers of the country the night before insertion. Last winter an advertisement of a bond issue was televisioned across the ocean to Paris and was on the streets there within three hours of its release in New York.

Three days before last Easter, a milliner in New York received from Paris a television showing in colors a new hat, copied it in his designing department, and had it on sale within three hours of its showing in Paris.

It is the clear obligation of the present generation to develop these possibilities nationally and internationally and devote them to world understanding and world peace. We have already proved what a wealth of good will can be gained from transportation and communication by our glorious apostle of youth—Lindbergh. We should send a thousand Lindberghs every day with messages of good will and with merchandise. A better world wide understanding will result, and will eliminate the jealousies, intrigue and envy that have caused wars.

We must do it before the next generation comes to manhood and womanhood. “We must turn all these mighty forces to the service of mankind. If we fail to do it, civilization is in jeopardy. When wars are fought in the air, there will be no “No Man’s Land” but every man’s house top will be the front. Aircraft of today will carry bombs of 5.000 pounds. They can be built to carry them of 10,000 pounds, 20,000 pounds— large enough to lay waste whole city areas, wrecking the buildings and destroying the people. It is possible for planes to use giant burning lenses weighing tons with which they could focus the rays of the sun upon a city and melt it.

These deadly weapons could thus be used for the destruction of mankind. But they need not be so used. It is the part of wisdom to turn them into economic blessings and angels of peace.