According to this article the answer is: exactly like us. 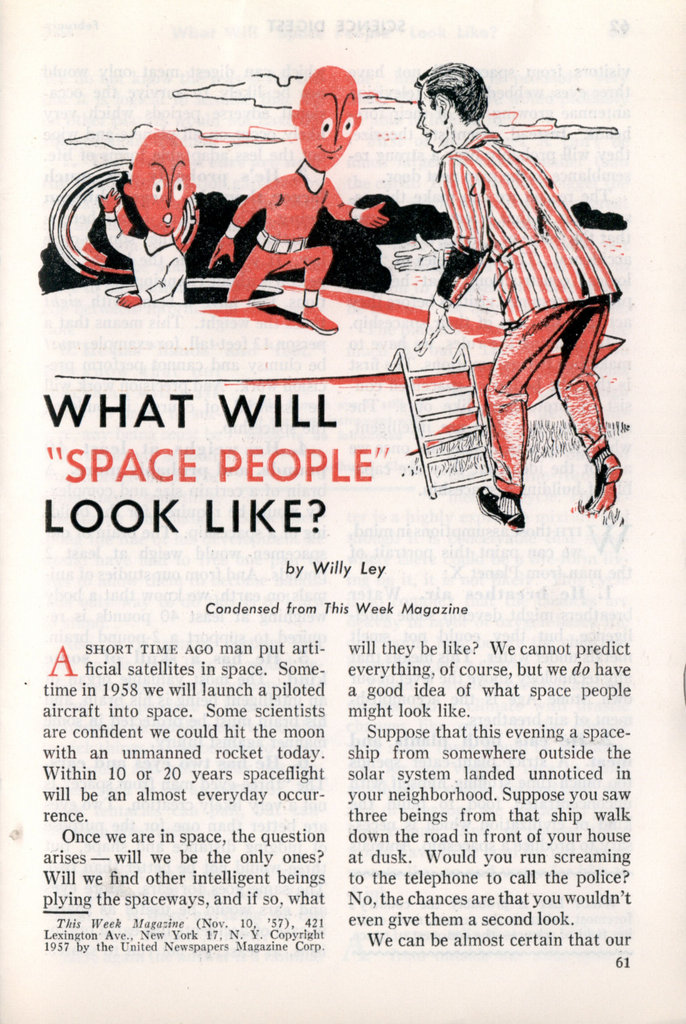 by Willy Ley
Condensed from This Week Magazine

A short time ago man put artificial satellites in space. Sometime in 1958 we will launch a piloted aircraft into space. Some scientists are confident we could hit the moon with an unmanned rocket today. Within 10 or 20 years spaceflight will be an almost everyday occurrence.

Once we are in space, the question arises â€” will we be the only ones? Will we find other intelligent beings plying the spaceways, and if so. what will they be like? We cannot predict everything, of course, but we do have a good idea of what space people might look like.

Suppose that this evening a spaceship from somewhere outside the solar system landed unnoticed in your neighborhood. Suppose you saw three beings from that ship walk down the road in front of your house at dusk. Would you run screaming to the telephone to call the police? No, the chances are that you wouldn’t even give them a second look.

We can be almost certain that our visitors from space will not have three eyes, webbed feet, or television antennae growing out of their foreheads. Instead, scientists theorize, they will probably bear a strong resemblance to the man next door.

The reason we can make this assumption is that science has shown that the shape of a living body is not accidental. There are rules of “biological construction” that help us picture presumed visitors before they actually step out of their spaceship.

In applying the rules, we have to make just two assumptions. The first is that the bodies of spacemen consist of protoplasm like ours. The second is that they are intelligent, which is an inescapable fact once we accept the idea that they are capable of building a spaceship.

With those assumptions in mind, we can paint this portrait of the man from Planet X:

1. He breathes air. Water breathers might develop some intelligence, but they could not smelt metals under water. This means that any technology above the level of our own Stone Age is the accomplishment of air breathers.

2. He eats both plants and meat. A strict plant-eater spends too much time stuffing himself with unconcentrated food to build the kind of civilization which is necessary to produce a spaceship. Animals which can digest meat only would not be likely to survive the occasional adverse periods which very likely occur on all planets and wipe out the less adaptable forms of life.

3. He’s probably not much larger than the largest human being. The limiting factor here is something called the square-cube law. If you double the height of a person without changing his proportions, you have a being with eight times the weight. This means that a person 12 feet tall, for example, must be clumsy and cannot perform precision work. And precision work will be essential, of course, in building the spaceship.

4. He weighs at least 40 pounds, and probably more. A brain of a certain size and complexity would be required for the building of a spaceship. The brain of our spacemen would weigh at least 2 pounds. And from our studies of animals on earth, we know that a body weighing at least 40 pounds is required to support a 2-pound brain.

5. He has a skull of some kind. The most valuable organ of an intelligent being is his brain, and his brain must be protected in some manner against injury.

6. He has two eyes and ears. The “three-eyed man from space” is not a very likely creation. Two eyes are better than one for the purpose of judging distance and shape, but three would not be better than two. The same goes for ears. More eyes and ears would be useful as spares in case of accidents but earth organisms, at least, do not run to spares.

We do not know the reason for this but it is logical to assume that life on other planets would not have developed along different lines.

7. The eyes and ears are near the brain. Information gathered by eyes and ears must reach the brain quickly in order to be useful. This transmission by the nerves is slow. Therefore the sense organs must be close to the brain to shorten the time lag between information and reaction.

We know that our spaceman will walk erect. In order to survive, any being must be able to move around. But in order to build he would need something resembling our hands. Somewhere along the line of his development he would have had to free one pair of legs to allow them to become hands. The only way to do this is to learn to stand.

Also, it is almost certain that once on his back legs he would develop bending fingers and opposable thumb. To produce a high state of technology he would need to be able to pick things up, to be able to grasp, hold, push and pull. Why not tentacles, such as on an octopus? Because tentacles can pull, but cannot push effectively.

Now that we’ve drawn a rough portrait of the Man from Planet X, is there anything we can guess about Planet X itself?

Here again the answer is a familiar one; his planet is probably very much like ours. We would probably be able to live on it.

First of all, Planet X can’t be much larger or much smaller than the earth. If it were much bigger the gravity would be so crushingly great that life would never even get started. If it were too small, it would not have sufficient gravitational pull to hang on to its gases and there would be no “air* for anybody to breathe.

The planet’s atmosphere would be much like ours. There are only two chemical combinations that are complex enough to support life: the carbon – oxygen – hydrogen cycle we live on, and the chlorine-fluorine, methane cycle. The latter is a highly explosive mixture and though it is conceivable that somewhere there could be a life-form living on it, it is not likely. This cycle is so complex that the chances are heavily in favor of oxygen-based life developing long before the chlorine-based form got a chance.

Planet X would have land and sea masses and a climate with drastic changes like ours. If the climate were static there would be no incentive for our visitor’s race to build anything. Variable hot and cold, wet and dry seasons are needed to push him around. And, of course, there would have to be land for our spacemen to live on and water for him to drink.

All this tells that our visitor is from outside our solar system since none of our sun’s planets, besides the earth, is capable of supporting intelligent life. It also tells us something else: our space visitor is a good bit more advanced than we are.

Whether it is because his race is more intelligent, or just because Planet X is older than the earth and he has had more time to develop, we cannot tell. But the fact is -that he has come from outer space. The nearest star system to us is Alpha Centauri, four light years away. So our visitor has come a minimum of four light years. Our technology, just on the edge of interplanetary flight, couldn’t even begin to tackle such an interstellar voyage. We would have a lot to learn from such a visitor.

Now that we know something of our spaceman’s looks and home, how certain can we be that he actually exists?

Well, in our own galaxy alone there are approximately 30 billion stars. Of course, there are hundreds of billions more in other galaxies. Scientists now think that most stars have planets, and find it almost impossible to believe that only one planet out of all the hundreds of millions is capable of producing intelligent life.

Of course lower forms of life are more likely to existâ€”but they would never reach the earth. The kind of creature that could pay us a visit would have to be essentially like ourselves.

Which brings us to the most intriguing question of all, frequently posed by science-fiction stories. What chance is there that a spaceship has already landed, and that the man next door might turn out to be the Man from Planet X?

I’m inclined to doubt that this chance exists. Suppose you or I built a spaceship and made the first landing on another planet. What would be the first thing we’d look for? Rightâ€”somebody to tell about it. I think the same would go for our visitor from space. I think he’d be too human to keep quiet.