Popular Electronics
Issue: Jul, 1957
Posted in: Medical
15 Comments on What You Should Know About DIATHERMY (Jul, 1957)

What You Should Know About DIATHERMY (Jul, 1957) 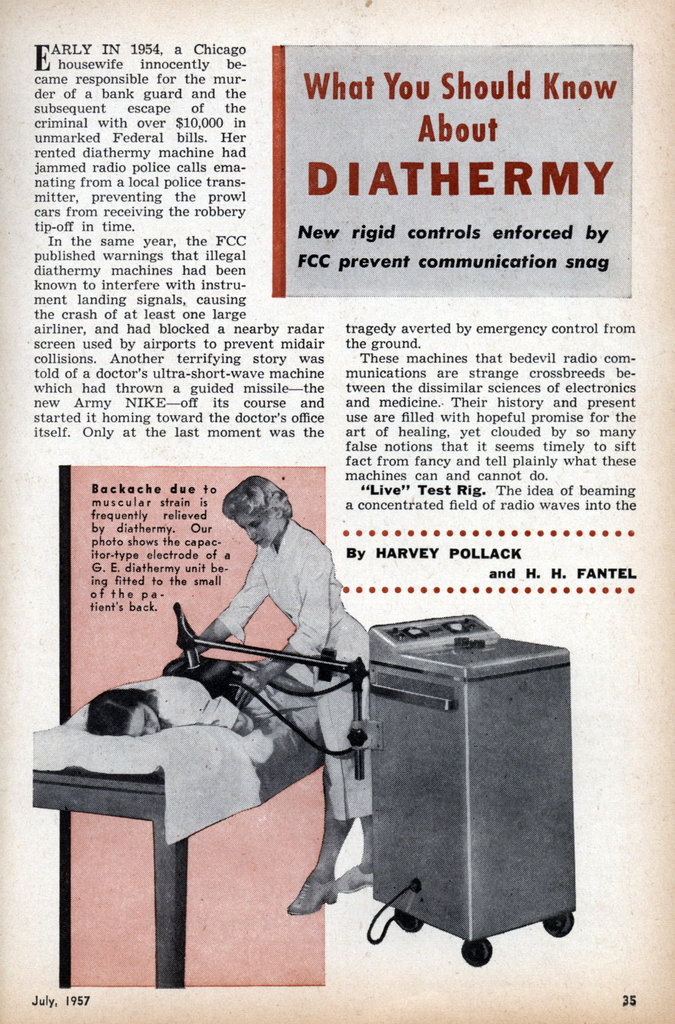 What You Should Know About DIATHERMY

New rigid controls enforced by FCC prevent communication snag EARLY IN 1954, a Chicago housewife innocently became responsible for the murder of a bank guard and the subsequent escape of the criminal with over $10,000 in unmarked Federal bills. Her rented diathermy machine had jammed radio police calls emanating from a local police transmitter, preventing the prowl cars from receiving the robbery tip-off in time.

In the same year, the FCC published warnings that illegal diathermy machines had been known to interfere with instrument landing signals, causing the crash of at least one large airliner, and had blocked a nearby radar screen used by airports to prevent midair collisions. Another terrifying story was told of a doctor’s ultra-short-wave machine which had thrown a guided missileâ€”the new Army NIKEâ€”off its course and started it homing toward the doctor’s office itself. Only at the last moment was the tragedy averted by emergency control from the ground.

These machines that bedevil radio communications are strange crossbreeds between the dissimilar sciences of electronics and medicine. Their history and present use are filled with hopeful promise for the art of healing, yet clouded by so many false notions that it seems timely to sift fact from fancy and tell plainly what these machines can and cannot do.

“Live” Test Rig. The idea of beaming a concentrated field of radio waves into the human body may seem odd at first. But we must remember that the science of electricity has from its beginnings been allied with biology. The twitching frog leg was the first indicator of electric current, long before the electroscope or other indicating instruments were invented. The effect of electricity on living organisms has ever since been a subject of research.

Convulsionâ€”the sickening cramp most of us have experienced as an “electric shock”â€”was the only known human reaction to electricity. This occurred with direct current or with alternating current of low frequency, such as ordinary, 60-cycle house current. Toward the end of the last century, fast-turning generators made it possible to step up the alternating current to several thousand cycles per second. It was then discovered that such currents did not cause the familiar and often lethal convulsion.

The French scientist d’Arsonval (remembered chiefly for his invention of the modern meter movement) experimented courageously along these lines, with himself as chief guinea pig. In 1891, using a Â¦ newly invented spark-gap generator, he revved up his a.c. to a million cycles. Then he did something seemingly suicidal. He hooked himself into the circuit, holding a light bulb to see if he was “drawing juice.” Everyone was shocked except d’Arsonval. When the bulb lit up, all he felt was a pleasant, relaxing warmth deep inside his body. D’Arsonval didn’t know it, but he had just given himself the world’s first diathermy treatment.

Brief Hope. Radio, the new wonder of the 1920’s, provided the next big push.

Vacuum-tube oscillators made it possible to control the frequency used for medical treatment within narrow limits, rather than spray out a broad band as did the old spark generator. Particularly, the newly developed short-wave circuits suggested the possibility of aiming focused radio beams at diseased parts of the body.

In 1924, Dr. Schereschewsky succeeded in killing a malignant tumor with 150-megacycle waves. This announcement created a sensation. It was front-page news to the public. Even medical journals dreamed of bloodless surgery, in which the short-wave electrode would replace the knife. To doctors and the public alike, this seemed like the millenium of medicine. For the surgeon’s knife, though it can halt decay and sometimes repair damage, can never accomplish positive good. Surgeons themselves, though confident and practiced in their art, often share their patients’ sense of mystic dreadâ€”for cutting of the living body brings to mind that all flesh is mortal and that the realm of medicine is ultimately powerless against the greater domain of death.

Yet medical hope fell as quickly as it rose. It was simply impossible to focus radio waves sharply enough to localize their effect to knife-edge exactness. Instead of becoming a substitute for surgery, short-wave therapy or diathermy simply remained a means of internal heat treatment.

The Healing Wave. In effect, shortwave diathermy is like a heating pad wrapped around a distressed organ or muscle inside the body. Doctors use the expression “point heating in depth” to describe the action. Such diathermy is now widely used to reduce inflammations of the internal organs, ease the pain of neuritis, neuralgia and bursitis. It has also been applied successfully in cases of pneumonia, tuberculosis and heart disease.

Just how it works, nobody knows. The patient is placed between antenna-type electrodesâ€”but what happens within the body is still a mystery. We know that heat is generated by the motion of molecules, and apparently the molecules of the body are stirred into a fast jig by the fluctuations of the high-frequency field. But aside from mere heat, there seems to be some unique organic effect having to do with still unknown forms of physiological energy transformation.

Only within recent years has the science of physical chemistry begun to investigate the action of complex organic molecules when placed within fields of electric energy. Much remains to be learned. Meanwhile, diathermy is prescribed by countless doctors as a welcome pain-reliever and accelerator of natural healing.

Pain in the Neck. The new pain-soothers, however, created a new painâ€”right in the neck of the FCC. Every day, thousands of these machines burst into the radio spectrumâ€”into practically every part of it. From all over the country came a flood of complaints from the radio services that diathermy machines were jamming the communications frequencies.

The FCC took quick action. After consultation with medical authorities, the commission in 1947 assigned two specific frequencies to which the machines were to be confined: 27.12 mc. and 13.56 mc. At the same time, owners of existing machines were given until June 30, 1953, to get back their original investment. On that date, the old machines were to have been discarded. Yet in flagrant violation of these regulations, the onset of 1957 saw over 10,000 of these illegal machines still in operation. Such machines were evidently responsible for the incidents reported at the outset.

FCC-approved machines must be fully shielded and metal-enclosed, must stay on frequency and not radiate spurious or harmonic frequencies. Notice that the permissible frequenciesâ€”27.12 and 13.56 mc.â€” are already harmonically related so that a diathermy operating on the lower frequency can produce a second harmonic only on the other diathermy frequency, thus limiting the chances of interference.

Safety Circuits. Modern diathermy machines employ special filters consisting of heavy choke coils and capacitors to prevent any radiation other than the approved 27.12 mc. to pass as interference through the over-all shield. The signal itself is usually generated by a push-pull oscillator of the grounded plate “TNT” type (tuned plate/untuned grid). The frequency of oscillation is preset at the factory by means of a shunt bar sliding along the center-tap rods of the plate tank circuit.

Unusual circuit features protect the patient. Most high-power oscillators are operated with their cathodes grounded; in this case, the plates of the oscillator tubes are grounded to the shielding enclosure, chassis, and all other metal structures, while the cathodes (filaments in this circuit) are made highly negative with respect to ground. Thus, should the pickup coils of the output circuit somehow become shorted to the tuning coils, the electrodes will still be at ground potential and the patient will not be in danger of possible electrocution!

After placing the patient between two suitable electrodes, the machine is tuned until a milliammeter in the plate circuit swings to maximum. This shows that the entire load circuit, including the patient himself, is in resonance with the oscillator. In effect, the patient acts as a dielectric between the electrodes.

Although the FCC has approved several different models of self-excited oscillator diathermies, some manufacturers claim that such equipment can never be relied upon to remain on the legal frequency. These manufacturers swear by crystal-controlled units which provide pin-point frequency stability and remove all the guesswork during the life of the machine regardless of tube changes or dislocation of wiring or components. As for output power, about 400 watts is considered by the medical profession as just about right to produce deep-seated heating in bone and cartilage tissue.

The erstwhile “miracle of medicine” that sprang directly from radio experimentation is now shorn of false claims and unreasonable expectation. Yet its very real merits have earned for it a firm and respected place in the doctor’s office for specific, limited application. In the home, diathermy equipment should be used only on a doctor’s advice. In either case, increasing public dependence on radio-operated devices demands that every diathermy user know the necessary precautions to safeguard radio service from interference.