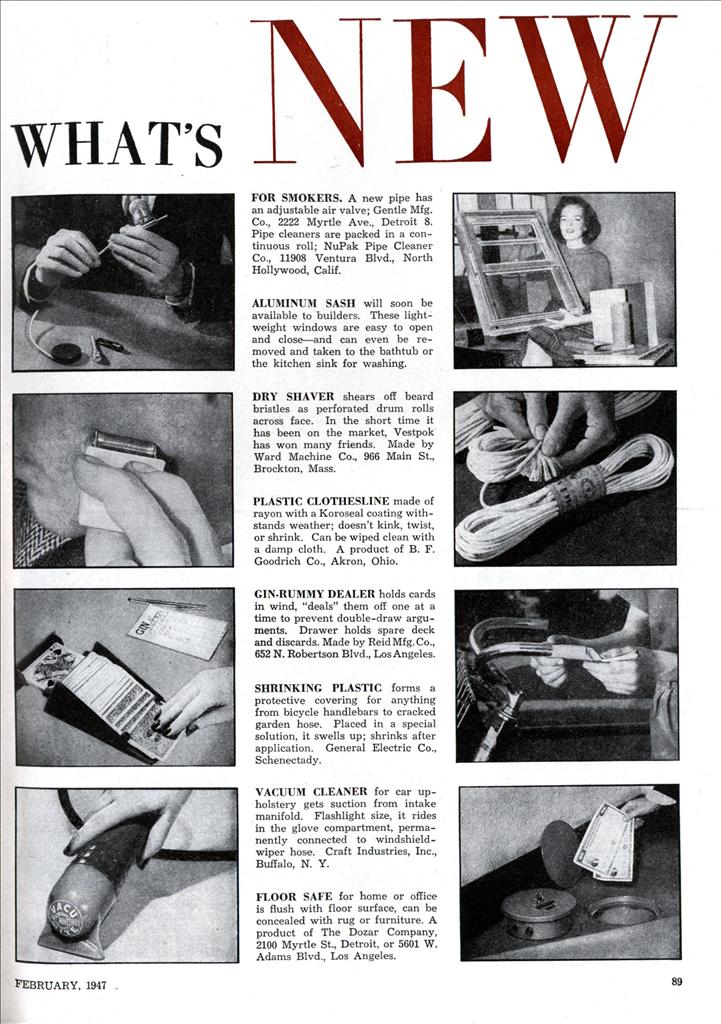 ALUMINUM SASH will soon be available to builders. These lightweight windows are easy to open and close—and can even be removed and taken to the bathtub or the kitchen sink for washing.

DRY SHAVER shears off beard bristles as perforated drum rolls across face. In the short time it has been on the market, Vestpok has won many friends. Made by Ward Machine Co., 966 Main St., Brockton, Mass.

PLASTIC CLOTHESLINE made of rayon with a Koroseal coating withstands weather; doesn’t kink, twist, or shrink. Can be wiped clean with a damp cloth. A product of B. F. Goodrich Co., Akron, Ohio.

GIN-RUMMY DEALER holds cards in wind, “deals” them off one at a time to prevent double-draw arguments. Drawer holds spare deck and discards. Made by ReidMfg.Co., 652 N. Robertson Blvd., Los Angeles.

SHRINKING PLASTIC forms a protective covering for anything from bicycle handlebars to cracked garden hose. Placed in a special solution, it swells up; shrinks after application. General Electric Co., Schenectady.

FLOOR SAFE for home or office is flush with floor surface, can be concealed with rug or furniture. A product of The Dozar Company, 2100 Myrtle St., Detroit, or 5601 W. Adams Blvd., Los Angeles.

FIRE ALARM. If you lose sleep worrying about a fire in the basement, this small alarm made by Turner Brothers, Inc., 2625 Hilton St., Ferndale, Mich., should ease your mind. It has a thermostatic switch preset to close when the temperature reaches a point indicating a fire near by. The switch closes a circuit, causing the four flashlight cells to ring a warning bell. The bell (not included) can be installed wherever you like.

PORTABLE AIR. Surplus oxygen tanks originally intended for use by high-altitude pilots are being converted into air tanks for service stations. Instead of having to maneuver from gas tank to air hose, motorists can have their tires inflated wherever the car happens to be. The tank will hold a pressure of 500 pounds, enough to take care of several tires. Made by B. and L. Products Co., 338 Peters St., S. W., Atlanta, Ga.

TALKING LETTERS. With the “Mail-A-Voice,” made by the Brush Development Co., 3311 Perkins Ave., Cleveland, audible mail has arrived. You can record a three-minute letter on a thin paper disk, fold, and mail it. The recipient puts it on his own Mail-A-Voice and listens. Disks can be “erased” with a magnet and used again.

WATERPROOF AUTO WIRING, even on old cars, is easily obtained with a new plastic that forms a moistureproof coating on wires between distributor and spark plugs. The transparent film also prevents corrosion of battery terminals. Cimota Plastics Co., Camden, Del.

PAINTBRUSH CLEANER. Capillary action is called into play in a paintbrush cleaner made by the Howe Company, Stony Creek, Conn. After use a brush is placed in a holder built into the container. The chemical is harmless to bristles and can be used over and over again.

OYSTER OPENER is not for home use, unless you live on the bivalves, but you may see it in your favorite sea-food restaurant. A pull on the handle puts Pressure on the center of the shell, making it open up promptly without damage the contents.

COLOR BAR. One of these days you’ll be able to go into your paint store and have exactly the color you want mixed to your order in a motor-controlled paint dispenser. Made by the Arco Co., Cleveland, it makes more than 2,000 different shades by mixing 16 paints.

TROUBLE LIGHT that plugs into the cigarette-lighter socket of your car has a magnet built into it to hold the light on motor, fender, or wherever you want it. A red light guard casts a warning glow at night. H. L. Baumgardner Corp., 2018 W. North Avenue, Chicago.

FLAMELESS FLARES are another nighttime aid for motorists. Designed to replace oil or electric flares, they have Plexiglas reflectors that cast a red warning light for half a mile when struck by the headlights of an approaching car. Grote Manufacturing Co., Bellevue, Ky.

FAIIRENHEITOR TEMPOT, available at Macy’s, Herald Square, New York, is a two-way kitchen utensil so well insulated that it can be used either as a fire-less cooker or as an ice chest. Aluminum with cork insulation, it holds three pans for cooking food or keeping it cold.

TOUGH CHINA. The latest addition to the well-known Russel Wright dishware has appeared in retail stores. Made of high-fired china that will withstand oven and icebox temperatures, the new dishes are hard to break, easy to wash, and designed for stacking in minimum space.

EASIER IRONING comes with a recent addition to the floor-ironer line. The “Glad-iron” folds up when not in use, has wheels to simplify storing. A knee lever controls the position, starting and stopping, and speed of the motor-driven ironing shoe, leaving the user’s hands free to guide the work. Like hand irons, the machine has a thermostatic control adjustable to ironing temperatures for various fabrics. And the whole thing weighs only 7-1/2 pounds. Made by the Hurley Machine Division of the Electric Household Utilities Corp., 54th Avenue and Cermak Road, Chicago.

MAP HOLDER. Motorists have a better chance of keeping on the right track with a transparent map holder that attaches to the sun visor of a car. Held in place by an adjustable elastic cord, the holder can also be used for shopping lists, memos, or anything else needed for ready reference. Visor-Ads, West Hartford, Conn.

NEW GAME. The fourth dimension has become so commonplace that game makers feel obliged to use at least three. One result is “Qubic,” made by Duplicon Co., Hopkinton, Mass. Played on four levels of 16 squares each, the game is won by the first player (of two or three) to get four men in a row. Not Einstein, but tricky.

PUSH-BUTTON DOG CONTROL. A dog leash of stainless steel, wound on a spring-driven reel, is controlled by a push button. It will let out more line, haul in the slack, or lock the leash. The case for the reel, shaped to fit the palm, fits in pocket or purse. M. R. Grandon Co., 620 N. Doheny Drive, Los Angeles.

SALT STAYS DRY in a novel shaker made by the Beebe Specialty Co., Norfolk, Va. Instead of the conventional holes, the shaker has a vertical tube inside that lets out the salt, keeps out the air. A companion shaker of similar design keeps pepper dry and fresh.

ENDLESS PENCILS are being made by Moore and Monroe, Inc., Statler Office Building, Boston. Instead of throwing away a stub, you moisten a glue-coated dowel on a new section, stick it in the end of the stub, and keep on writing. Every inch of pencil can be used.

FIRST-AID FLASHLIGHT. Designed primarily for motorists and campers but still not a bad item to have around the house, the “Flash-Aid” combines a conventional flashlight with a first-aid kit Besides two standard flashlight cells, it holds bandages, Mercurochrome, and burn ointment. The battery occupies a separate compartment behind the flashlight bulb. “Flash-Aid” is manufactured by Lewyt Corporation, 60 Broadway, Brooklyn, N. Y.

ELECTRIC LAWN MOWERS powered by batteries are being turned out by at least three manufacturers. Each uses a regular six-volt storage battery and has built-in charging equipment; all you need to do to keep the battery charged is to plug a cord into your regular 110-volt supply. The mower pictured above is made by the Silver Creek Precision Corp., 415 Lexington Avenue, New York. Another, somewhat similar in design, is produced by the LeJay Motors Corp., Minneapolis, Minn. A third, more elaborate, is a rotary-blade machine with three wheels made by the Best Manufacturing and Equipment Co., Wichita, Kansas. The last will cut anything from short grass to tall weeds and is adjustable to cut anywhere from the surface to 4Vz inches above the ground. When materials are available, it will be provided with attachments for polishing floors and sweeping sidewalks and driveways.

SECTIONAL ROWBOAT. The Cormier brothers, Oliver and Ed, of Dorchester, Mass., have designed a three-piece collapsible rowboat. For transportation, the bow and stern nest inside the center section, making a 66-pound package that can be carried atop, inside, or in the trunk of an automobile. In the water, the three parts are held together by clamps. As shown in the photograph, each section will float independently.

GLOWING PLASTIC tumblers are being made by a new process developed by McCallum, Devitt and Ford, 201 N. Wells St., Chicago. Instead of coating the plastic with a luminescent film, as has been done in the past, the manufacturers of “Paulite” actually combine pigments and plastic; there is no coating to wear off or possibly produce toxic effects. The tumblers, designed to prevent nighttime bathroom mistakes, glow with a soft, blue light. Besides being visible in the dark, they are resistant to breakage. Also made of Paulite are pull cords and house numbers.

OBEDIENT DOORS for your garage respond to a control button on the dashboard of your car. A solenoid under the car actuates a mercury switch buried in the driveway; the switch, in turn, sets going a mechanism that unlocks and opens the garage doors and turns on the lights— any lights you want. You can repeat the whole performance in reverse when you drive out. Buttons in the house and garage provide manual control of both closing and opening. A safety clutch prevents possible injury to children. Horton Manufacturing Division, Aviation Corp., Circleville, Ohio.

GAS-BURNING INCINERATOR. The Calcinator, made by Valley Welding and Boiler Co., Bay City, Mich., has a small gas burner that dries out and burns refuse. Ashes can be removed once a week from a tray at the bottom.

POCKET HUMIDOR is a heat-welded tobacco pouch that is completely waterproof. Because there are no sewed seams, moisture cannot escape from the tobacco. Made by the Gardner Corporation, Empire State Building, New York.