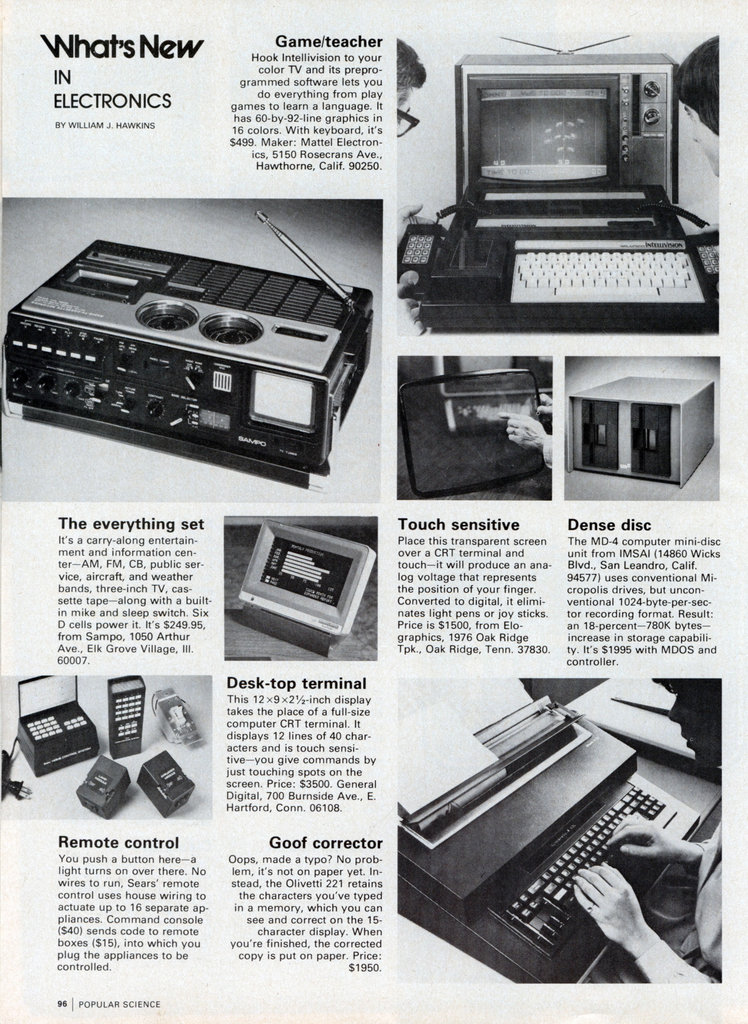 Game/teacher
Hook Intellivision to your color TV and its preprogrammed software lets you do everything from play games to learn a language. It has 60-by-92-line graphics in 16 colors. With keyboard, it’s $499. Maker: Mattel Electronics, 5150 Rosecrans Ave., Hawthorne, Calif. 90250.

Touch sensitive
Place this transparent screen over a CRT terminal and touchâ€”it will produce an analog voltage that represents the position of your finger. Converted to digital, it eliminates light pens or joy sticks. Price is $1500, from Elo-graphics, 1976 Oak Ridge Tpk., Oak Ridge, Tenn. 37830.

Desk-top terminal
This 12x9x2-1/22-inch display takes the place of a full-size computer CRT terminal. It displays 12 lines of 40 characters and is touch sensitiveâ€”you give commands by just touching spots on the screen. Price: $3500. General Digital, 700 Burnside Ave., E. Hartford, Conn. 06108.

Remote control
You push a button hereâ€”a light turns on over there. No wires to run, Sears’ remote control uses house wiring to actuate up to 16 separate appliances. Command console ($40) sends code to remote boxes ($15), into which you plug the appliances to be controlled.

Goof corrector
Oops, made a typo? No problem, it’s not on paper yet. Instead, the Olivetti 221 retains the characters you’ve typed in a memory, which you can see and correct on the 15-character display. When you’re finished, the corrected copy is put on paper. Price:
$1950.