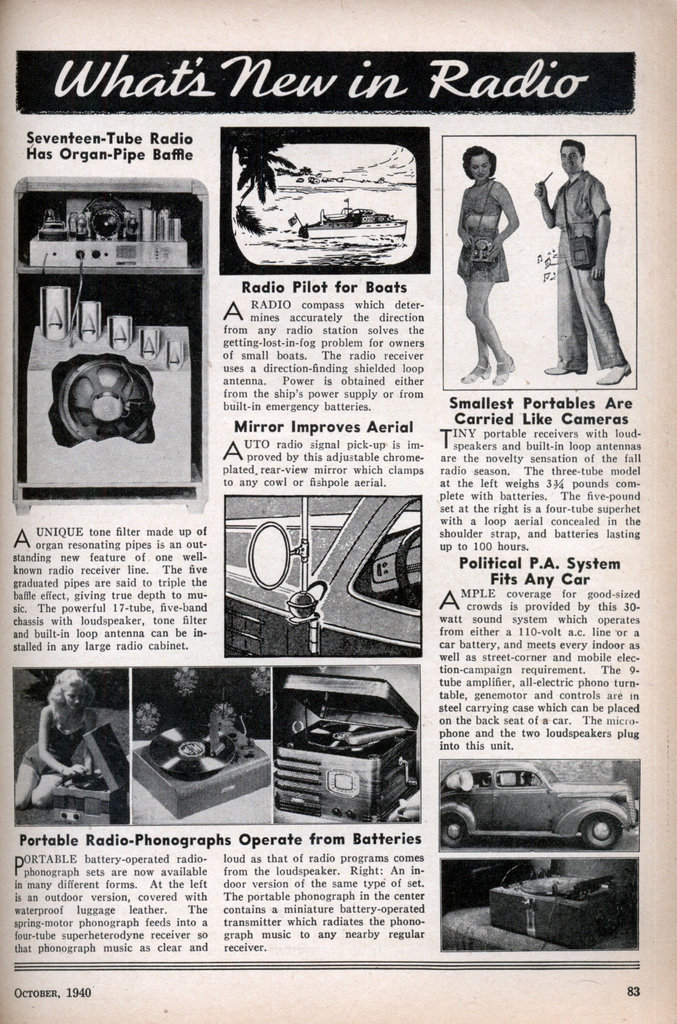 A UNIQUE tone filter made up of organ resonating pipes is an outstanding new feature of one well-known radio receiver line. The five graduated pipes are said to triple the baffle effect, giving true depth to music. The powerful 17-tube, five-band chassis with loudspeaker, tone filter and built-in loop antenna can be installed in any large radio cabinet.

PORTABLE battery-operated radio-phonograph sets are now available in many different forms. At the left is an outdoor version, covered with waterproof luggage leather. The spring-motor phonograph feeds into a four-tube superheterodyne receiver so that phonograph music as clear and loud as that of radio programs comes from the loudspeaker. Right: An indoor version of the same type of set. The portable phonograph in the center contains a miniature battery-operated transmitter which radiates the phonograph music to any nearby regular receiver.

A RADIO compass which determines accurately the direction from any radio station solves the getting-lost-in-fog problem for owners of small boats. The radio receiver uses a direction-finding shielded loop antenna. Power is obtained either from the ship’s power supply or from built-in emergency batteries.

AUTO radio signal pick-up is improved by this adjustable chrome-plated, rear-view mirror which clamps to any cowl or fishpole aerial.

TINY portable receivers with loudspeakers and built-in loop antennas are the novelty sensation of the fall radio season. The three-tube model at the left weighs 3^4 pounds complete with batteries. The five-pound set at the right is a four-tube superhet with a loop aerial concealed in the shoulder strap, and batteries lasting up to 100 hours.

AMPLE coverage for good-sized crowds is provided by this 30-watt sound system which operates from either a 110-volt a.c. line or a car battery, and meets every indoor as well as street-corner and mobile election-campaign requirement. The 9-tube amplifier, all-electric phono turntable, genemotor and controls are in steel carrying case which can be placed on the back seat of a car. The microphone and the two loudspeakers plug into this unit.