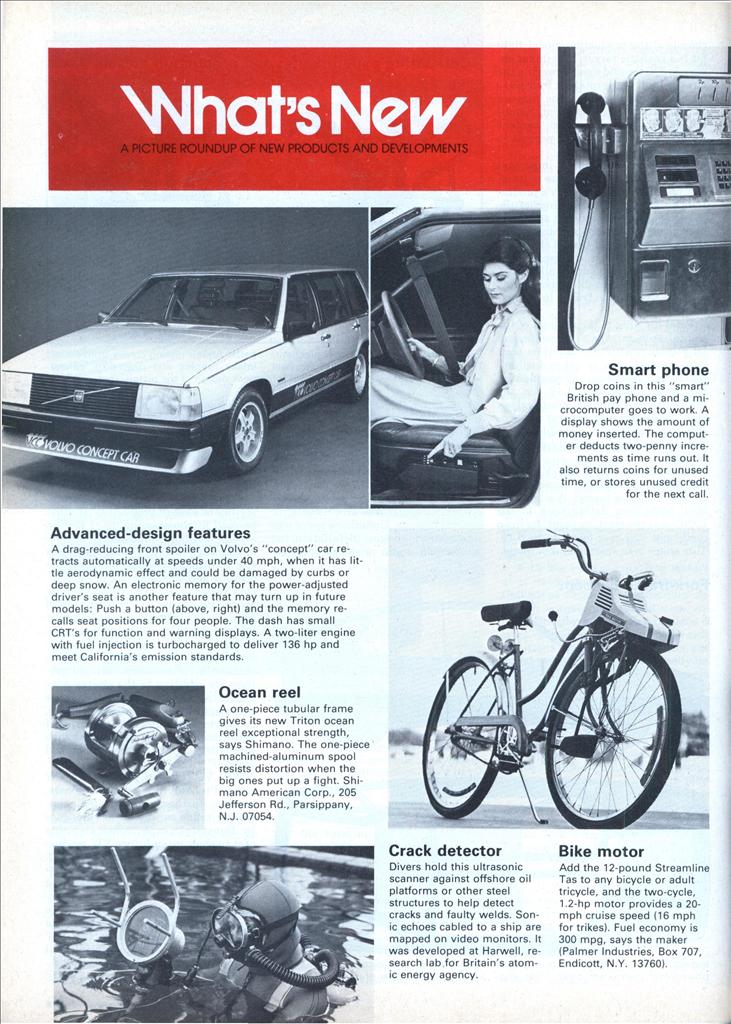 A picture roundup of new products and developments.

Advanced-design features A drag-reducing front spoiler on Volvo’s “concept” car retracts automatically at speeds under 40 mph, when it has little aerodynamic effect and could be damaged by curbs or deep snow. An electronic memory for the power-adjusted driver’s seat is another feature that may turn up in future models: Push a button (above, right) and the memory recalls seat positions for four people. The dash has small CRT’s for function and warning displays. A two-liter engine with fuel injection is turbocharged to deliver 136 hp and meet California’s emission standards.

Crack detector Divers hold this ultrasonic scanner against offshore oil platforms or other steel structures to help detect cracks and faulty welds. Sonic echoes cabled to a ship are mapped on video monitors. It was developed at Harwell, research lab for Britain’s atomic energy agency.

Smart phone Drop coins in this “smart” British pay phone and a microcomputer goes to work. A display shows the amount of money inserted. The computer deducts two-penny increments as time runs out. It also returns coins for unused time, or stores unused credit for the next call.

Automatic dialer This auto dialer from Dictograph holds up to 30 numbers. What about busy signals? It automatically redials a busy or unanswered number for you every minute. Display shows number dialed, time, or elapsed time when unit is in use. The Phone Controller is $100.

Head cleaner Pop this new 3M cassette into your VCR and in less than 30 seconds, the heads will be clean. The cassette contains five minutes of abrasive cleaner to remove dirt. When heads are cleaned, a message appears on the screen telling you to turn off the VCR. About $29.

Record cleaner First, it applies a cleaning solution to the record surface. Next, it brushes the surface to loosen dirt. Then the LP is vacuumed and blow-dried. Want more from an automated record cleaner? It does both sides at once. TMA, 35 E. Hills Dr., New Canaan, Conn. 06840. $695.

Remote car alarm The problem with most car alarms is that you must be around to hear them. With this Mobile Alert from Radio Shack, however, you can be half a mile away—the pocket receiver beeps if your car’s been broken into. Car transmitter requires a CB license. Price: $100.