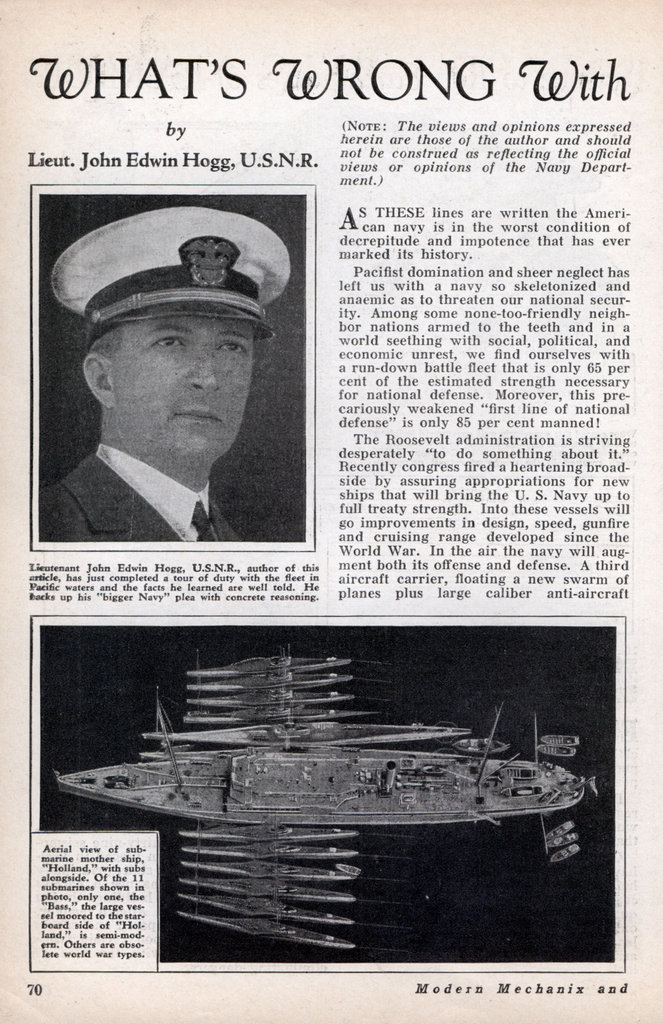 The Roosevelt administration is striving desperately “to do something about it.” Recently congress fired a heartening broadside by assuring appropriations for new ships that will bring the U. S. Navy up to full treaty strength. Into these vessels will go improvements in design, speed, gunfire and cruising range developed since the World War. In the air the navy will augment both its offense and defense. A third aircraft carrier, floating a new swarm of planes plus large caliber anti-aircraft weapons and new machine guns will further holster the defense.

The close of the World War found the leading nations financially impoverished, sick of war, and plunged into a new competitive race of armament building. This country made an honest and sincere effort to influence the other nations to make drastic reductions in both military and naval armament. To that end we called the Washington Naval Conference of 1922. So enthusiastically did we plunge into that conference that in the words of the late Admiral William A. Moffett, who went to his death in the wreck of the airship Akron, “Uncle Sam lost everything but his shirt tails when he signed the Washington Treaty.”

As a gesture of our peaceful intentions toward Japan and other nations of the Far East we gave up the fortification and equipment of naval bases west of Hawaii. Simultaneously we scrapped 842,000 tons of new naval construction at an expense of $275,439,275 to the American taxpayers. Included in this were eleven of the finest and most modern men-of-war; seven powerful battleships and four battle cruisers. These ships were building at the time and the average stage of completion was 30 per cent. No other nation made such sacrifices.

Out of the debacle we salvaged two battle cruisers that were 33 per cent complete and cobbled them over into a pair of freak airplane carriers as an alternative to no carriers at all. These ships are the Lexington and Saratoga, two weak baskets in which we have carried most of the eggs of our naval aviation in recent years. They are makeshift contraptions with guns, smokestacks and superstructures squeezed out of the sides of their flying decks to menace the life of every aviator making a landing or take-off.

Having junked nearly $276,000,000 worth of REAL fighting ships the United States, under the terms of the Washington Treaty, was allowed to spend $76,760,000 for the “modernization” of the fifteen old battle-boats we retained. Some of these ships were nearly out of date when the treaty was signed in 1922 and, of course, we have built no battleships since.

A great deal of this battleship “modernization program” has since been carried out. Blister hulls were constructed around some of the old armor belts to provide old ships with effective protection against mines and torpedoes. Topside decks have been armored and strengthened against aircraft bombs, and steel “hats” were fitted over the smoke-stacks to keep enemy aviators from-dropping their pineapples into the engine rooms. Airplanes and catapults have been installed. Various gunnery improvements were made, including anti-aircraft batteries and machine gun nests for discouraging aerial attack. Provision, of course, had to be made against the probability of gas attack from the air.

They look like 1934 models but they are far from it. The cold fact is that a 1934 battleship is not to be had short of building one from the keel up. There will be no 1934 American battleships, however, because the Washington Treaty says we can’t build them until 1937.

Now let us have a look at what happened after Uncle Sam surrendered his life insurance and flung the cash on the Washington and London poker tables.

England went through the gesture of scrapping 448,000 tons of naval ships, but what she scrapped was a lot of old packets that were about ready for the break-up yards. Japan junked 193,000 tons upon which construction had scarcely begun. France and Italy tore up some blueprints. Having scuttled most of the naval power we had, Uncle Sam sat back and considered the job all done! We did almost no naval building through the administrations of Presidents Harding, Coolidge, and Hoover.

Meanwhile Japan has laid down or appropriated for 164 new vessels totalling 410,000 tons. England has laid down or appropriated for 148 ships, including two fine battleships, a total of 470,000 tons. Japan has steadily built up her fleet until she is now only a few tons under the treaty limits. England has built, or is building, so she will have a navy of approximate treaty strength by 1936. No other leading nation has shown the slightest inclination to follow our disarmament example.

With the start of President Roosevelt’s administration, the navy found a new lease upon life. Warships are being built at a greater pace than ever before in peace time. In all 212,000 tons of new naval craft are being laid down. The navy will have 58 new ships that will bring it up to full treaty strength. Through 1935 $442,000,000 will be spent to carry out the naval program.

As this is being written congress is considering an additional 102 new ships at a cost of at least $380,000,000 to replace present ships when their age of usefulness is passed.

When this program is carried out the navy will rank second to none.