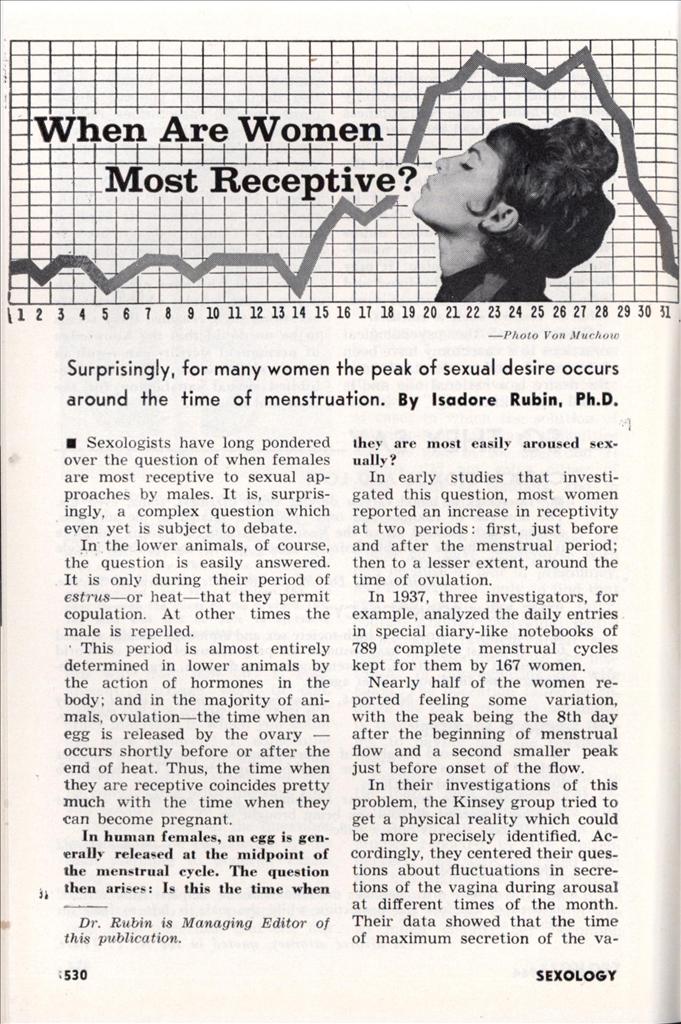 When Are Women Most Receptive?

Surprisingly, for many women the peak of sexual desire occurs around the time of menstruation. By Isadore Rubin, Ph.D.

Sexologists have long pondered over the question of when females are most receptive to sexual approaches by males. It is, surprisingly, a complex question which even yet is subject to debate.

In the lower animals, of course, the question is easily answered. It is only during their period of estrus—or heat—that they permit copulation. At other times the male is repelled.

This period is almost entirely determined in lower animals by the action of hormones in the body; and in the majority of animals, ovulation—the time when an egg is released by the ovary — occurs shortly before or after the end of heat. Thus, the time when they are receptive coincides pretty much with the time when they can become pregnant.

In human females, an egg is generally released at the midpoint of the menstrual cycle. The question then arises: Is this the time when they are most easily aroused sexually?

In early studies that investigated this question, most women reported an increase in receptivity at two periods: first, just before and after the menstrual period; then to a lesser extent, around the time of ovulation.

In 1937, three investigators, for example, analyzed the daily entries in special diary-like notebooks of 789 complete menstrual cycles kept for them by 167 women.

Nearly half of the women reported feeling some variation, with the peak being the 8th day after the beginning of menstrual flow and a second smaller peak just before onset of the flow.

In their investigations of this problem, the Kinsey group tried to get a physical reality which could be more precisely identified. Accordingly, they centered their questions about fluctuations in secretions of the vagina during arousal at different times of the month. Their data showed that the time of maximum secretion of the va- gina and the time of maximum sexual responsiveness were almost always the same.

The Kinsey investigations found that more than half of the women (59 per cent) with experience in intercourse recognized a monthly fluctuation in their vaginal secretions during sexual arousal.

Only 1 in 10 of these women reported secretion as being greatest at the time of ovulation. Kinsey investigators also found that women who masturbated only once a month usually did so only before or after menstruation.

A more recent British study (1960) came up with almost the same finding. When questioned by Dr. Ruth D’Arcy Hart, a medical officer attached to a London fertility clinic, 123 women gave these replies: Fifty – nine per cent answered that there seemed to be an increase in sexual desire either before, after, or (in a few cases) during menstruation. Only 6 per cent reported an increase during the midpoint of the cycle.

However, a different kind of answer was found in a famous study done by 2 psychoanalysts, Dr. Therese Benedek and Dr. Boris B. Rubinstein in the late 1930’s and early 1940’s. They found — in a study of 15 neurotic women—that there was a close correlation between the changes in ovarian hormone levels during the menstrual cycle and the sexual and emotional levels of the woman.

They reported that, during the first half of the cycle, when the hormone estrogen was being produced, the woman’s sexual drive was much more active than it was later on. It reached its peak during the middle of the month, just before ovulation.

It should be noted that these investigators were studying not the conscious statements of women, but their unconscious feelings as revealed by analysis of dreams, fantasies and associations.

The findings of Benedek and Rubinstein imply that estrogen, or one type of female sex hormone, is responsible for the fluctuation in the woman’s sex desire.

This view, however, must be seriously challenged by recent evidence that points to the likelihood that it is not female hormone, but androgen, a male sex hormone, which is responsible for increasing the sexual receptivity of women, and which is probably produced mostly by the adrenal glands, small glands over the kidneys.

For example, a number of women who were given androgen treatment reported an increase of sexual desire as a side effect of the treatment. More evidence has been given by studies of women who had had both ovaries and both adrenals removed in the treatment of breast cancer.

When the ovaries were removed, the loss of the hormones produced by them did not seem to affect the women’s sexual drive or response at all. When the adrenals were removed, sex desire and response was diminished in almost all the women. The responsible factor for this seems to have been the loss of male sex hormone produced by the adrenals. This hormone affects the sensitivity of the end-organs and thus heightens sex response.

Thus, it seems fairly well established that, while female sex response does depend on having a basic level of sex hormone in the body, fluctuations in response during the cycle are not tied to the monthly hormonal changes.

Somewhere in the course of evolution. the Kinsey group pointed out, the human female “has departed from her mammalian ancestors and developed new characteristics which have relocated the period of maximum sexual arousal near the time of menstruation.”

Thus, unlike other species, the peak of sexual arousal occurs in human females at a time which is not advantageous for the biological end of pregnancy. It is clear then that in human females the role of hormonal factors in sex response has diminished. Social and psychological factors have become most important in determining woman’s response to love-making.

Why should the peak occur around menstruation? We can only speculate as to the reasons.

One reason that has been given is that the menstrual period has been for women in nearly every society a time when they were absolutely prohibited from engaging in intercourse. Because women thus anticipate a period of deprivation, their sex desires may rise just before the menstrual period. A rise in desire after the period may be due to several days of enforced chastity.

“ALL THE BEST SEX”

The wife of a prominent English clergyman has suggested in an article published in her parish magazine, that the Church of England ought to issue a textbook on love-making for inexperienced wives, according to a UPI dispatch.

“Many women,” said Mrs. Ronald Lacey, wife of the Vicar of St. Leonard’s, “who please men outside of marriage take great pains over this part of their education.”

“Must we pass on to our daughters,” Mrs. Lacey wrote, “the advice given to so many of us by our mothers—not by mine—that sex must be grudgingly or graciously given as a present for a good boy?

“When we can tell them, and our sons, that snatched ‘bits of fun’ can’t compare with the variety of excitement there can be in a lifetime between husband and wife, then perhaps they’ll think marriage worth waiting for.”