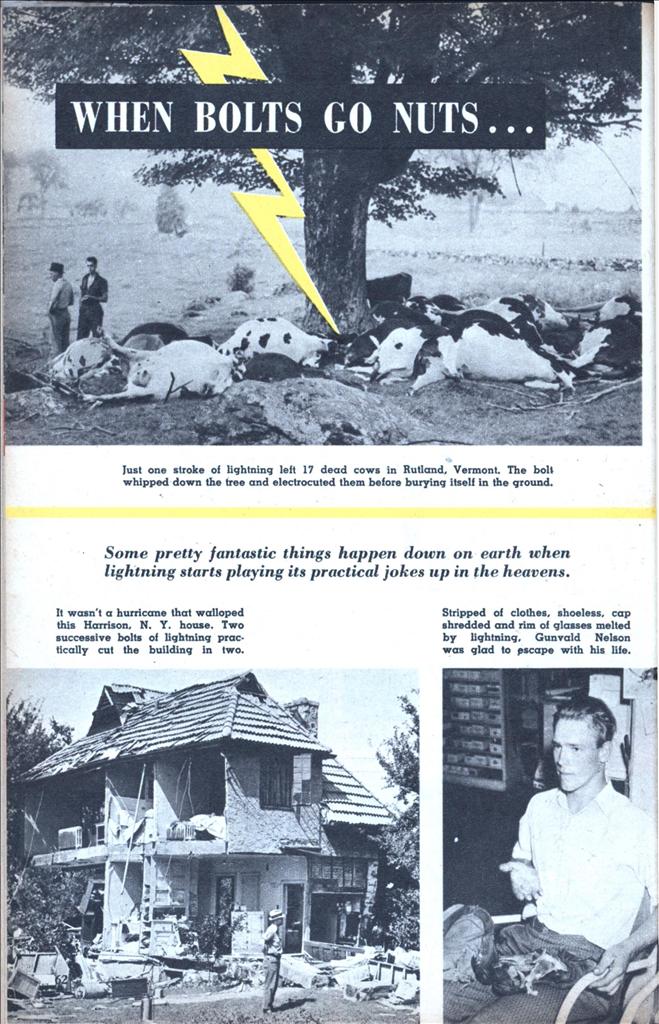 Some pretty fantastic things happen down on earth when lightning starts playing its practical jokes up in the heavens.

CHARLES Brown of Kenton, Ohio, is living proof that lightning can strike twice. As a matter of fact—ten times!

Brown has been pursued by bolts for nearly 20 years during which time he has been struck again and again. Last time it happened in the Kenton library. A ball of flame came through the open window and, with a terrific noise, exploded in a shower of sparks right near where Brown was sitting absorbed in a book.

Although one of his legs was temporarily paralyzed as a result, he was back at work in two weeks—his normal convalescing time. He’s still there in Kenton, working at his trucking business—but with one wary eye cocked toward the sky.

If this sounds like black magic to you, remember that lightning has been the perpetrator of many unusual tricks. And although scientists are endeavoring—often with the aid of man-made bolts—to gain new insight into lightning’s habits, its most wacky pranks still come as a surprise.

When lightning struck Mike Hotujac’s home in Kansas City recently, he telephoned the fire .department. As Fireman Claude Williams answered the phone, a new bolt struck and sparks shot from the mouthpiece into his face. Although neither of the men was injured, it was several minutes before Hotujac could call back to complete the report.

A Macon, Georgia, businessman insists that it was lightning that pulled a key from his bedroom door and flung it into his shoe, a distance of about ten feet.

Lightning has been known to strip all clothing from persons, leaving them naked but otherwise unharmed. A few years ago one stroke welded an iron chain into a solid rod, while another killed a hunter without discharging his gun.

Members of the world of sports have found the cosmic jester to be overly-attentive in the past, too. A bolt of lightning even took sides last year. It struck a baseball diamond in Urbana, Ohio, during the first inning of a game with the Troy, Ohio, team. All the Urbana players were knocked off their feet by the bolt, but not one of the Troy players was touched.

A similar accident occurred only a week before that, at a game in Baker, Florida. Lightning plowed a 20-foot furrow in the field, knocked all the players down, killing three, and showered flashes of fire on a small crowd of 300.

Baseball, however, is not the only sport to have been shaken up by lightning. A bolt from the sky struck a football field during the playing of the Army soccer cup final at Aldershot, London, recently, and hurled all 22 players and the referee to the ground.

In one of the strangest pranks on record a stroke of lightning once solved a robbery. The initials D. D. were found burned on the thigh of a man dazed by a bolt. The physician who treated him recognized the initials as identical with those on a wallet which had been stolen from him some days before. The man then confessed the theft, admitting the wallet had been in his pocket when the lightning struck.

It is often difficult to check the record of tricks played by lightning because, in many cases, no clues are left. For example, it once removed the gilding from two picture frames without harming either frames or pictures. Another time, a capricious flash jerked knitting needles from the hands of two women and miraculously left the knitters unhurt.

Everyone has heard weird stories about ball lightning. In San Francisco, for example, the patrons of a local theater suddenly found themselves blinded by a globe of intense light rolling up the aisle. On reaching the stage it exploded, leaving behind a sulphurous odor. On another occasion, when a young farm girl poked at a fiery globe which had rolled into her father’s barn it exploded, killing all the cattle in the barn but leaving the girl uninjured.

Awakening during a thunderstorm in Istanbul, a shopkeeper and his family were terrified by a flash of blinding light followed by a loud report. The head of the house found the kitchen flooded with a light emitted by a large ball of fire that moved about the room, burning whatever it touched. Eggs which lay in its path were afterward found to be cooked. Finally, it reached the dining room door, burnt its way through, and then died out. Nobody was harmed, but so terror-stricken was the shopkeeper’s wife that she lost the use of her left leg for more than a week.

Many animals have been involved in freak accidents. In East Conway, New Hampshire, a short time ago lightning killed a cow as Richard Webster milked the animal in his barn. Fortunately, he was knocked over by the falling cow and escaped unhurt.

During a violent hailstorm near Capetown, South Africa, lightning struck a native boy returning from plowing with a team of eight oxen. The boy fell unconscious in the path of the heavy plow but before it could crush him a second flash killed all the oxen.

Probably the two most amazing accidents involving animals happened to a pig and a horse. Porky the pig was just one of a litter of several pigs, all black, on a farm near Austin, Texas. Came a lightning bolt and Porky turned from black to white. In the case of the horse, a bolt of lightning knocked his four shoes off. Melvin Fanton of Wellsville, N. Y., who owned the creature said, “The animal wasn’t hurt, but he sure was in a daze for a while.”

Lightning has also played strange tricks on human minds and bodies. A deaf boy struck by lightning regained his hearing, while a blind workman, felled by a bolt, had his sight restored.

On other occasions, lightning has restored use of limbs to paralytics, often after medical aid has failed. There are some cases on record of insane people having been cured by a lightning stroke, the curative action appearing to be like that of modern shock treatment for mental disease.

Photographic studies of lightning indicate that airplanes must climb to a height of about four miles to avoid the hazards of electrical storms. Recently, the result of a seven year investigation of lightning directed by Dr. K. B. McEachron was revealed to the members of the American Institute of Electrical Engineers. In this study, lightning strokes originating in a cloud 16,000 feet above the ground were photographed. The greatest number were 2000 to 7000 feet above the ground, with 50 per cent above 4000 feet.

The average lightning stroke, according to Dr. McEachron, lasted fifteen one-thousandths of a second and the longest observed stroke lasted four-fifths of a second. Discussing the speed of a streak of lightning, this authority said that the leaders or initial strokes were observed to travel from 2.5 feet to 85 feet in a millionth of a second, or from 500 to 17,000 miles a second. Some streaks of lightning are made up of as many as twenty-six strokes, following one another with great rapidity.

In Jamestown, N. Y., recently, the doorbell rang at the home of Mrs. Roger W. Cramer. She answered tin bell, found no one there, but identified her visitor by the smoke it had left. Lightning had courteously rung the door bell to announce itself.

At least that’s what the experts told her. Yes, science can usually account for every one of lightning’s quirks—but only after the bolts go nuts. •