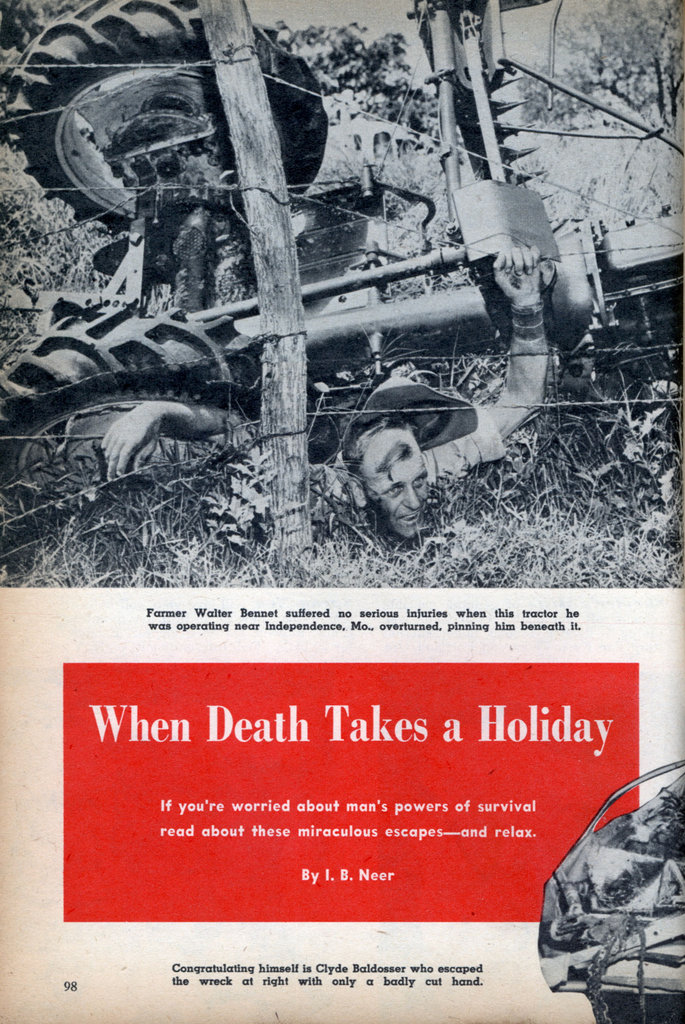 Witness the fantastic experience of a two-year-old boy who virtually came back from the dead in New York City last Spring. Thomas Paiva, Jr., toddled into the bedroom of his home in lower Manhattan and climbed up a radiator to the window sill. He swung open the casement window, lost his balance and plummeted downward. He hurtled down 15 stories, landing in a clump of light bushes which could not have broken his fall appreciably. At that point the odds on young Thomas’ life were a billion to one. But, what were his injuries? A fractured leg!

If you think that only kids, with their “green” bones, can fall long distances and live, listen to this one. It’s a case cited by Hugh De Haven, director of the Crash Injury Research Clinic, who has made a lifelong study of falls and crashes. A Staten Island, N. Y., workman was setting up the rigging of a scaffolding atop a 175-foot smokestack when he slipped, fell 150 feet, made an eight-inch depression on a slope close to a wall, bounced over the wall, fell another ten feet and landed on the lower level. Dead? Not by a long shot. He suffered three broken bones and other non-fatal injuries.

But these cases were mere bunny hops compared to the unbelievable fall of British Sergeant N. S. Alkamade, who was in the tail of a Lancaster bomber over Germany in March of 1944 when it was struck by enemy fire. The entire-fuselage was suddenly enveloped by a sheet of flame as the gasoline tank exploded. With the plane heeling over on its starboard side, Alkamade dashed for his chute which he had left hanging on a rack. He was horrified to find it a burning mass from the sprayed gasoline. Then, 18,000 feet from the groundâ€”more than three milesâ€”the sergeant closed his eyes, murmured “This is it,” and jumped.

Three hours later he opened his eyes. White, fleecy clouds drifted lazily overhead. Was he dead? He turned his neck to the left, – then to the right. No pain. He slowly moved his arms, then his legs, then his body. Slowly he rose to his feet and looked at himself.

His boots were gone, his flying suit was in shreds. His eyes moved upwards, then down. Towering above him were some thick pine branches; at his feet was a four-foot blanket of snow. Together they had broken his fall and put him securely in the miraculous escape hall of fame!

There’s more to the story: he was taken prisoner by Nazi soldiers, who scoffed at his story. But the German authorities ordered a thorough investigation and Alkamade was given a certificate, signed by a German colonel, attesting to the fact that he had actually fallen 18,000 feet without a chute and lived. There seems to be a special kindly sort of providence that embraces select people when they are faced with serious falls. In Lille, France, Yvon Dherire was setting tiles on a roof when his foot slipped and he tumbled off.

Six stories below was a baby buggy with an infant snoozing contentedly. The mother, seeing the body descending, snatched out the baby, and the tile setter landed completely unharmed squarely inside the carriage. In Washington, D. C, Mrs. Anne McGinnis fell from a fire escape on the fourth floor, hit a clothes line one floor below and was neatly flipped through an open window into a bathroom on the second floor. And in Springfield, Mass., Henry Lefeave, watching a Fourth of July parade from a third-floor window, leaned out too far, lost his balance and dived toward the ground. On the way down he grabbed the top of a flagpole jutting from the building and teetered perilously until he could be hauled through a second-floor window.

World War II had a bumper crop of amazing escapes. But the Korean conflict has had some solid ones of its own, too. Recently, an unidentified GI reported to a field hospital for treatment of a badly bruised nose. His story: a hand grenade lobbed by a North Korean had struck him on the schnoz, then bounced off to explode harmlessly in a ditch by the side of the road.

Then, there was Gary M. Nason of Detroit who was sitting with his back propped against a shack when he heard the chatter of a machine gun. He looked up. Neatly initialed about three inches above his head was a perfect G, for Gary, formed by bullets! He fainted.

With yearly automobile deaths now at the one million mark in this country alone, you wouldn’t think that death takes many holidays on the open road. Yet the family bus and its occupants have participated in some hair-raising escapes that even the old Hollywood serials would have rejected as just too fantastic.

Here’s how H. W. Lewis thumbed his nose at death last year at Cannon Ball Beach in South Africa. Mr. Lewis was driving merrily along a road carved into the side of a cliff when his car skidded, smashed through a protecting fence and dived over the precipice. He shuddered and closed his eyes. No splash. No descent. No nothing. Warily he opened his eyes and found himself staring at the sea more than 100 feet below. The car was hugging the side of the cliff, headed downward, swaying gently. With infinite caution, Mr. Lewis climbed into the back seat and eased himself up and over the cliffsifle to the safety of the road. He peered down and saw what had happenedâ€”a heavy, gnarled thorn tree was hooked into the rear axle, holding the auto like a giant finger of fate!

Death was looking the other way when a panel truck and an automobile collided on a Milwaukee street in 1949. Sitting on a tricycle in front of his home was five-year-old Douglas Sturomski. The truck lurched toward him and horrified onlookers saw the huge vehicle fall squarely upon the small boy. When a rescue squad laboriously righted the truck they found Douglas and his tricycle whole and safe. Both had been neatly framed by an open window, which was just large enough to enclose boy and cycle.

The kind fate that watched over Douglas was also hovering above Ethel Sheffield, a gal taxi driver of Regina, Saskatchewan, not long ago. Ethel was driving alone one blisteringly cold night in January, with the mercury hovering at 16 below when her cab skidded on the ice-encrusted street and crashed into a lamp-post. Ethel was knocked unconscious. Picture the situation: a deserted street, no passersby, a fearfully cold night and an unconscious woman in the front seat of her cab. By morning she would almost certainly be frozen to death. But look what happened: a fire alarm box attached to the post was set off by the crash, bringing firemen on the double. Miss Sheffield was speedily revived and went home, not much the worse for her narrow brush with death.

Jesse Spitzer of Denver made his escape the hard wayâ€”he got himself involved with a car and a railroad train and still got off almost scot-free. Mr. Spitzer was hurled through the roof of his car after an accident, landing on the train tracks just as a speeding locomotive rushed down on him. After the long string of freight cars passed, there lay Mr. Spitzer, uncrushed and almost unharmed. He had rested securely in the track bed as the train whooshed over him. His injuries? One broken legâ€”caused by the auto accident, not the train.

Sometimes you don’t have to do any active falling or crashing to escape death by a whisker. Henry W. Ridges of a Chicago suburb just sat. Suddenly the entire building collapsed on him and a heavy beam apparently crushed both his thighs. Rescuers watched fascinated as Ridges calmly unbuckled his two artificial limbs and crawled safe and sound from the wreckage.

An unidentified vagabond in Florida was sunning himself on the rear lawn of a tall building when three huge spikes, weakened by a recent storm, fell from the roof and imbedded themselves several inches deep into the ground beside himâ€”one right over his head, two on each side of his chest. All of them missed him by inches.

Even these close calls, amazing though they may be, are pale in contrast to the weird goings-on in the Thuringen Forest on an April afternoon in 1945. Pat Mitchell, top-notch combat correspondent for The Stars and Stripe’s, American Army newspaper, saw the whole thing.

A Nazi 88 struck a Sherman tank of Combat Command B of the Third Army’s 11th Armored Division- The shell burst among the gears in the front, sending the teeth flying like shrapnel all around the inside of the sealed vehicle. Pat, who had leaped from his jeep and taken cover in a ditch, says it was like being in a meat-grinder working at high speed, with the added hazard of fire. And fire came as the tank exploded. Yet the three-man crew bailed out, with not one man touched.

And then, Pat continues, the men found themselves out in the open, with no cover of any sort. They lay flat on their faces as enemy fire spattered all around them. When the barrage was over, not one man had been touched!

Oops, sorry, there was one casualty. German fire found its mark, completely demolishing a bottle of local brew which one of the GIs had been carrying in his back pocket.