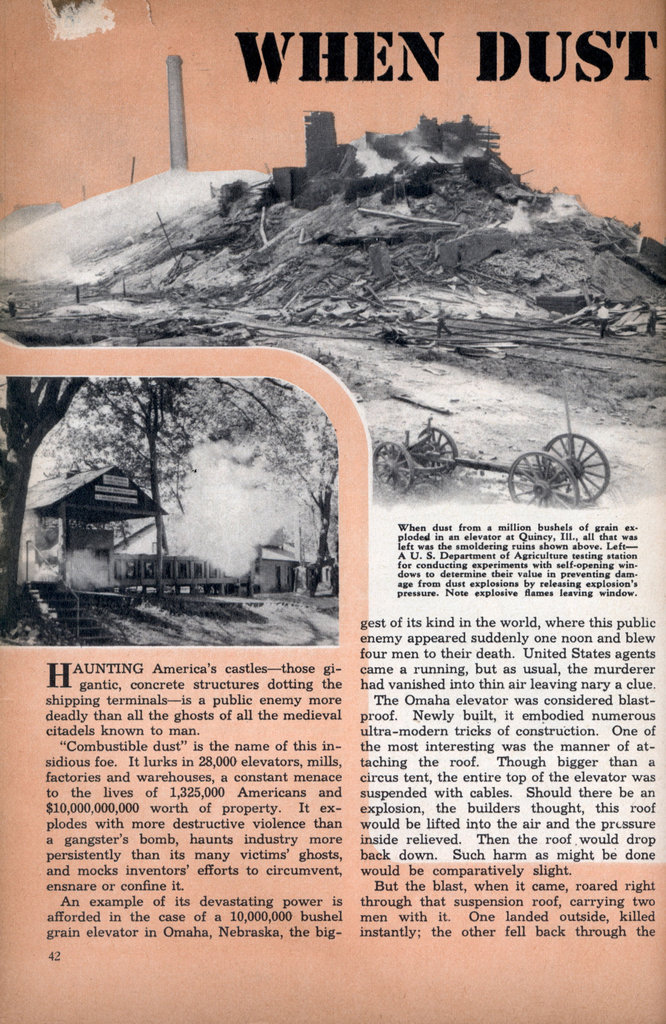 As destructive as a racketeer’s bomb, combustible dust exacts its toll of business.

HAUNTING America’s castlesâ€”those gigantic, concrete structures dotting the shipping terminalsâ€”is a public enemy more deadly than all the ghosts of all the medieval citadels known to man.

“Combustible dust” is the name of this insidious foe. It lurks in 28,000 elevators, mills, factories and warehouses, a constant menace to the lives of 1,325,000 Americans and $10,000,000,000 worth of property. It explodes with more destructive violence than a gangster’s bomb, haunts industry more persistently than its many victims’ ghosts, and mocks inventors’ efforts to circumvent, ensnare or confine it.

An example of its devastating power is afforded in the case of a 10,000,000 bushel grain elevator in Omaha, Nebraska, the biggest of its kind in the world, where this public enemy appeared suddenly one noon and blew four men to their death. United States agents came a running, but as usual, the murderer had vanished into thin air leaving nary a clue.

The Omaha elevator was considered blast-proof. Newly built, it embodied numerous ultra-modern tricks of construction. One of the most interesting was the manner of attaching the roof. Though bigger than a circus tent, the entire top of the elevator was suspended with cables. Should there be an explosion, the builders thought, this roof would be lifted into the air and the pressure inside relieved. Then the roof would drop back down. Such harm as might be done would be comparatively slight.

But the blast, when it came, roared right through that suspension roof, carrying two men with it. One landed outside, killed instantly; the other fell back through the roof into a bin full of soft grain, unharmed.

Two other persons were crushed and suffocated beneath the mountain of grain and machinery and it took three days for firemen to tunnel their way through the wreckage to the bodies. Even this was done only at great risk. From a score of cracks, grain trickled through in steady streams, any one of which might grow into a death-dealing deluge at any moment. This also kept the air surrounding the workers constantly saturated with the dangerous dust.

Equally horrible, but in another way, was a bronze company plant explosion in Paines-ville, Ohio. Firemen sped to the scene, but dared not throw water on the blazing ruinsâ€” even though they knew human beings were in the infernoâ€”because the explosion had been caused by aluminum powder and to put water on it would only have caused more dynamic blasts.

This tragedy was unique in that one of the victims lived long enough to tell what touched it off. A mechanic, he said, dropped one of his tools on a piece of sheet metal. It gave off a Spark and this set fire to some aluminum powder which had accumulated. The worker ran for a pail of sand, the customary method of fighting such fires being to build a wall of sand around them and let them burn themselves out, without spreading to other places. In his excitement, this laborer forgot the rules. Instead of building a little bank around the fire, he threw the sand on it. There was a flashâ€” and five of the six men in the plant at the time were killed.

Sometimes the “enemy” seems to delight in taunting investigators. After a wood dust explosion in a chair company plant at Cleveland, Ohio, an inspector was sent to examine the plant’s boiler.

He used an open torch, just as he had been doing for 20 years, setting it down inside the boiler so he could tap the pipes. The pounding dislodged some dust which had settled on them. It fell on the torch, ignited and exploded. Luckily, the flash passed over the inspector’s head and he was not injured.

All these and many other explosions were investigated by Dr. David J. Price, principal engineer in charge of the Chemical Engineering Division, Bureau of Chemistry and Soils, United States Department of Agriculture, and his staff of scientists. These men have no police powers, although they sometimes are called “dust detectives.” Their whole concern is scientific research, and thanks to them the United States leads the world in this particular work.

These experts have found that any kind of dust which will burn is likely to explode. Why does the dust explode? Simply because the rate at which it burns is determined by the amount of its surface which is exposed to oxygen. When fire travels from one particle to another, and encounters resistance in some form, there is an explosion. That’s all a dust blast really is, a spurt of flame darting quickly from one fleck of combustible matter to another. And it’s just too bad for whoever or whatever gets in its way.

Since 17 persons died in a Richport, Vt., blast in 1908, and heavy damages were collected in the courts, possibly because of the management’s neglect to install full safety devices, elevator owners and other industrialists have been extremely interested in preventing these explosions.

But it is no easy matter. Despite the best efforts of inventors, dust still collects in the air in many factories and warehouses. And despite the utmost caution on the part of employes, this dust still becomes ignited.

Dr. Price formerly served in the Bureau of Mines and ran into the same kind of a public enemy thereâ€”dust explosions in coal mines. In this case, the danger was eliminated very largely by the simple trick of mixing non-combustible rock dust in with the combustible coal dust. The principle is the same as that on which Sir Humphry Davis based his famous miner’s lamp.

It works swell———in mines, but you can’t mix other kinds of dust in with the dust of things you are going to eatâ€”so the idea isn’t worth much in dealing with grain and cocoa blasts.

Hylton R. Brown, one of Dr. Price’s assistants and the secretary of the National Fire Prevention Association’s committee on dust explosion hazards, has tackled the problem from another angle.

By excluding oxygen from the air in danger spots, the possibility of explosions can be eliminated. To get rid of the oxygen, you merely extend the exhaust pipe from an engine into the place, and let the carbon monoxide drive it out.

Dust can’t blow up without oxygen, but human beings can’t live without it either, so the application of this idea is confined to places in which it is not necessary for men to workâ€”a very serious limitation.

There remains a third method of attack: By reducing the resistance which the flame encounters when it begins to zip through the dust. In other words, let it explode but keep it from doing any serious damage.

This was the idea of the designer of the suspended elevator roofâ€”which didn’t work out in Omaha, but which has proven worthwhile in many other cases. Light plate glass windows, for instance, have been recommended for dusty places. And often explosions have blown out such windows and done little other damage.

Much to the scientists’ annoyance, many of the most disastrous blasts in recent years have occurred in buildings which were constructed with the utmost care and attention to safety factors. The one which killed seven men in St. Louis in May, 1934, was in a modern, fire-resistant, 4,000,000-bushel, terminal elevator. The grain elevator in Omaha was only three years old when it blew up.

Every year the toll mounts, more than 600 such explosions now being on record in this country, involving a loss of nearly 500 lives and nearly 50 million dollars worth of property.