Modern Mechanix
Issue: May, 1936
Posted in: Movies
Tags: celebrities, hobbies, Hollywood
1 Comment on When Hollywood STARS TURN To HOBBIES (May, 1936)

When Hollywood STARS TURN To HOBBIES (May, 1936) 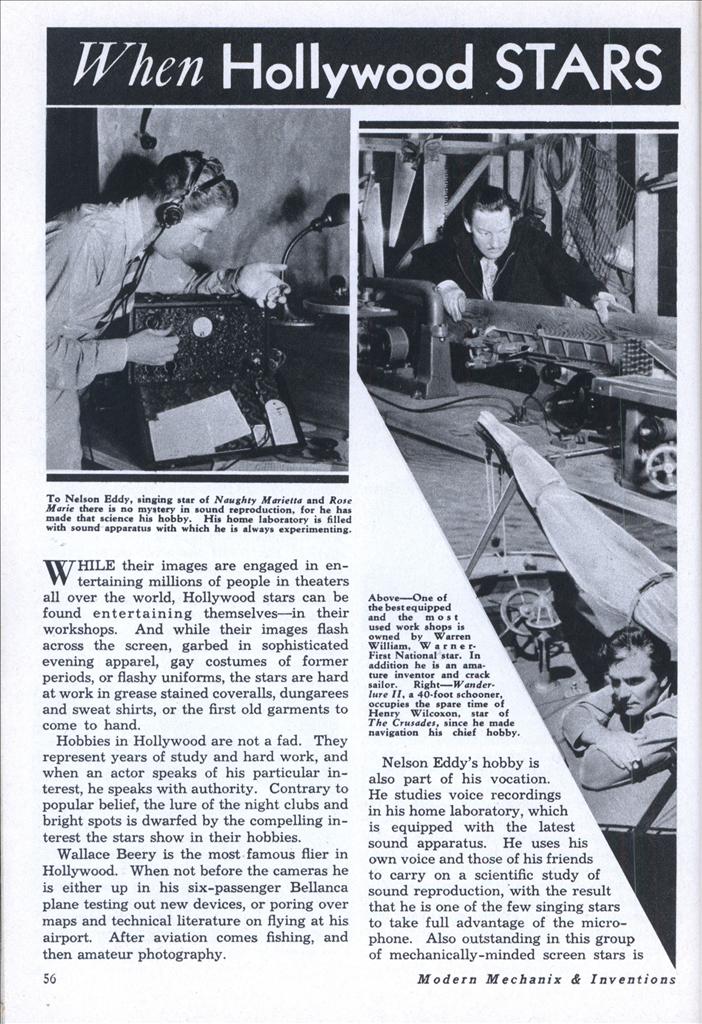 When Hollywood STARS TURN To HOBBIES

WHILE their images are engaged in entertaining millions of people in theaters all over the world, Hollywood stars can be found entertaining themselvesâ€”in their workshops. And while their images flash across the screen, garbed in sophisticated evening apparel, gay costumes of former periods, or flashy uniforms, the stars are hard at work in grease stained coveralls, dungarees and sweat shirts, or the first old garments to come to hand.

Hobbies in Hollywood are not a fad. They represent years of study and hard work, and when an actor speaks of his particular interest, he speaks with authority. Contrary to popular belief, the lure of the night clubs and bright spots is dwarfed by the compelling interest the stars show in their hobbies.

Wallace Beery is the most famous flier in Hollywood. When not before the cameras he is either up in his six-passenger Bellanca plane testing out new devices, or poring over maps and technical literature on flying at his airport. After aviation comes fishing, and then amateur photography.

Nelson Eddy’s hobby is also part of his vocation. He studies voice recordings in his home laboratory, which is equipped with the latest sound apparatus. He uses his own voice and those of his friends to carry on a scientific study of sound reproduction, with the result that he is one of the few singing stars to take full advantage of the microphone. Also outstanding in this group of mechanically-minded screen stars is Alan Hale, whose flair is for things scientific. Of his many inventions three are deserving of mention because of their value to the modern world: His new “Tellurian,” his perfected “Aerobot,” and his improved eye-glasses. The “Tellurian” was conceived by Sir Isaac Newton a century ago, in the hope it would demonstrate the effect of various planets upon life and conditions on the earth. It was finally built by Hale and Merrill Hard, partners in an experimental and research laboratory. The instrument so simplifies the study of astrological bodies that a twelve-year-old boy, after four half-hour lessons, is enabled to pass a “Teacher’s Normal” examination which usually requires four years of study. Hale’s perfected “Aerobot” is capable of controlling the plane’s speed, altitude and flight direction while the pilot devotes his time to charting or listening to the radio.

Many of the Hollywood great have turned to boats for their hobbies. Warren William considers it no great accomplishment to handle his 30-foot sloop, Common Sense single handed in a strong wind. Henry Wilcoxon is another to prefer the graceful close-to-the- water sweep of a sail-boat, while “Tarzan” Weissmuller has a 48-foot yacht powered by two Diesel motors. Even Sir Guy Standing, whose real mechanical hobby is an automobile trailer, occasionally finds time to tinker with the engine of his small motor-boat.

Sir Guy’s trailer is roomy with a door built into the side, and contains all the requisite paraphernalia for an endless camping trip, including stove, adjustable bed, sink, cupboards, utensils, electric lights and storing space. His plans for this trailer were published in Modern Mechanix and are now available in blueprint form.

In line with this type of building hobby, cabinet-making has slipped to the fore as one of the most fascinating of pastimes to Hollywood people. Arthur Hohl, star of thrillers like Superspeed and Eight Bells, recently discovered what could be done with a little lumber and some toolsâ€”and since then has furnished an entire house with the products of his own plane and saw.

Planes, model and genuine, hold a peculiar fascination for people of the screen. It is here that Ruth Chatterton, one of the few mechanically-minded actresses, shines brightly. Paul Lukas, capitalizing on the experience he gained in the war, has a Spearman open-air bi-plane and is his own mechanic.

The spell of this tinkering habit has swept so completely over the film city that even minor studio attaches have been reached. Sound-technicians meddle with cameras, and cameramen go in for wireless stations, talking with China and Australia nightly.