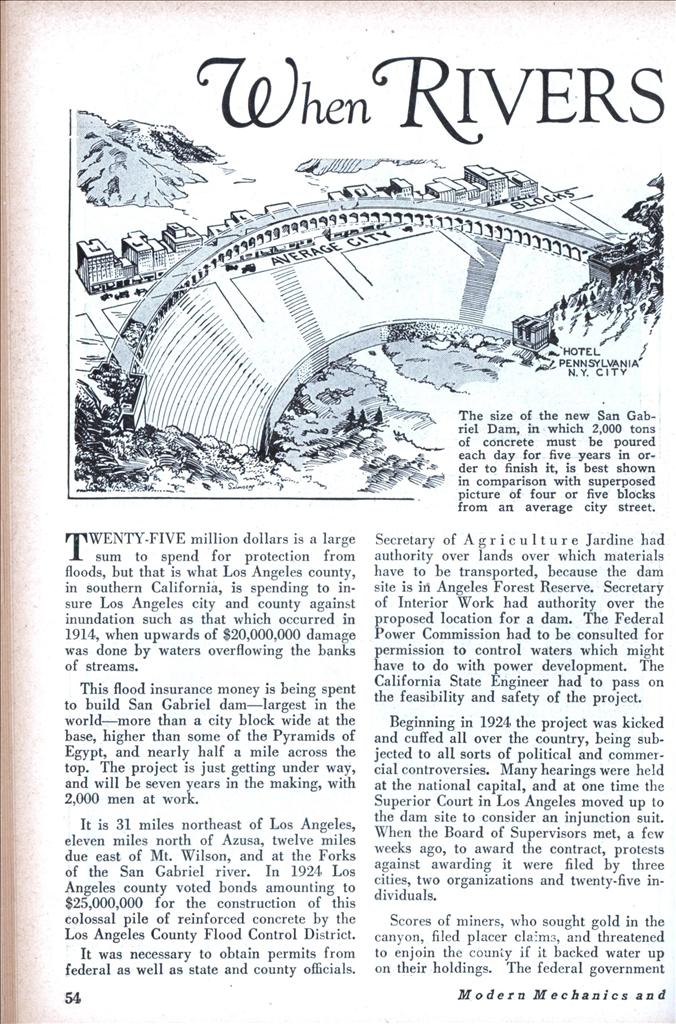 California, subject to periodic rainfall and melting of snows in the mountains, has been victimized by rampant rivers in the score of months just past. Told here, the story of the San Gabriel Dam shows the gigantic size of this water impounding monster, and how two rivers will be controlled with one dam.

TWENTY-FIVE million dollars is a large sum to spend for protection from floods, but that is what Los Angeles county, in southern California, is spending to insure Los Angeles city and county against inundation such as that which occurred in 1914, when upwards of $20,000,000 damage was done by waters overflowing the banks of streams.

This flood insurance money is being spent to build San Gabriel dam—largest in the world—more than a city block wide at the base, higher than some of the Pyramids of Egypt, and nearly half a mile across the top. The project is just getting under way, and will be seven years in the making, with 2,000 men at work.

It is 31 miles northeast of Los Angeles, eleven miles north of Azusa, twelve miles due east of Mt. Wilson, and at the Forks of the San Gabriel river. In 1924 Los Angeles county voted bonds amounting to $25,000,000 for the construction of this colossal pile of reinforced concrete by the Los Angeles County Flood Control District.

It was necessary to obtain permits from federal as well as state and county officials.

Secretary of Agriculture Jardine had authority over lands over which materials have to be transported, because the dam site is in Angeles Forest Reserve. Secretary of Interior Work had authority over the proposed location for a dam. The Federal Power Commission had to be consulted for permission to control waters which might have to do with power development. The California State Engineer had to pass on the feasibility and safety of the project.

Beginning in 1924 the project was kicked and cuffed all over the country, being subjected to all sorts of political and commercial controversies. Many hearings were held at the national capital, and at one time the Superior Court in Los Angeles moved up to the dam site to consider an injunction suit. When the Board of Supervisors met, a few weeks ago, to award the contract, protests against awarding it were filed by three cities, two organizations and twenty-five individuals.

Scores of miners, who sought gold in the canyon, filed placer claims, and threatened to enjoin the county if it backed water up on their holdings. The federal government sent engineers to investigate the placers and their probable value. The county paid them off at the rate of $500 for each 20-acre claim.

While the controversy was at its height Los Angeles county had the Forks site inspected and the dam plans reviewed by the late Gen. George Goethals.

The dam is calculated to hold back twice as much storm water as has ever been gauged in any of the major precipitations experienced in Southern California. Only about 120 feet of water will be maintained behind the dam. When it rises higher, it will gradually be drawn off through the spillways.

The only project in this country which compares with San Gabriel dam is Mathis dam, a power project on Tallulah river in Georgia. It contains only 1,500,000 yards of concrete, while San Gabriel will contain 4,000,000 yards, a quantity five times as great as that which went into the building of the great Assouan dam in Egypt.

San Gabriel dam will be 432.5 feet above stream bed and 475 feet above bedrock. It will be 2,200 feet long at the top, with a twenty-five foot roadway there. It will be 412 feet wide at the base. When completed, the structure will back up a lake of water eight to ten miles wide and five miles long, with a thirty-mile shore line, and will store 210,000 acre feet of water.

Necessity for this dam, which is purely for flood control, grew out of the fact that at intervals of eighteen to thirty years Los Angeles county has experienced downpours which have overflowed streams and greatly damaged property.

Such floods, rushing down from the mountains, have swept silt from 50,000 acres of valley ranches into Los Angeles harbor, and have cost the federal government and city of Los Angeles millions of dollars for channel-dredging.

Below the dam site the county has built hundreds of cottages to house from six to eight laborers each, and has erected a dining-hall which can accommodate 1,800 persons at a meal. A contract for feeding the men on the job had been awarded to a catering company on the basis of $1.35 per day for each individual.